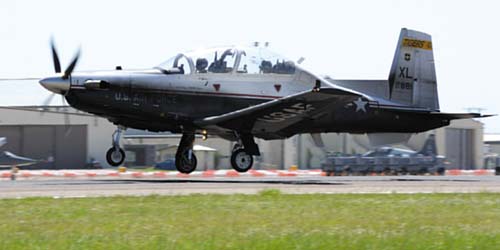 Though served by several U.S. highways, Del Rio lies in the Gulf Coastal Plains of Texas, a remote region near the Rio Grande. For motorists, the city is 156 miles from San Antonio on U.S. Highway 90; 1,324 miles from Chicago, 604 miles from Albuquerque, New Mexico, and 532 miles from Oklahoma City. From Dallas, it’s 416 miles west on I-20, then south on U.S. 83 at Abilene to pick up U.S. 277 west at Carrizo Springs.

The base covers 8.3 square miles, according to the Air Force, and includes three runways.

About Laughlin Air Force Base

What began as Laughlin Army Air Field in March 1943 was renamed Laughton Air Force Base in 1952, then 10 years later became an Air Education Training Command. It is now the U.S. Air Force’s biggest pilot training base.

The 47th Flying Training Wing, operating from one of the Air Force’s busiest airfields, is among the world’s premier pilot training wings. In 2014, the wing provided 329 pilots to the Air Force and U.S. allies.

The Air Education and Training Command (AETC), headquartered at Joint Base San Antonio-Randolph, was activated in 1942 as the Army Air Corps Flying Training Command with its then-headquarters in Washington, D.C., and is the second-oldest major command in the Air Force. During World War II, the command provided technical and flying training at more than 600 installations, institutions of higher learning and factories. Over the years, more than 25 million students have graduated from AETC training and education programs, and through its training mission it touches the lives of nearly every Air Force member.

Tenant units at Laughlin Air Force Base include the 47th Mission Support Group, the 47th Medical Group and the 47th Operations Group.

The base has a significant economic impact on Del Rio and its 30,079 residents. Laughlin Air Force Base’s total impact on the local economy in fiscal 2014 was slightly more than $214.5 million, and the base created 3,654 direct jobs and 845 indirect jobs that year.