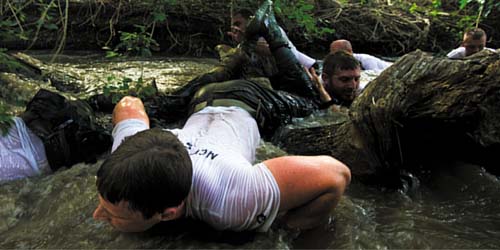 Under the Air Force’s 502nd Air Base Wing, Mission Support Group squadrons keep Joint Base San Antonio running smoothly with their services but under slightly different names and with slightly different responsibilities on each of the three installations. On JBSA-Lackland, the 502nd Installation Support Group (the 802nd Mission Support Group until 2013) consolidates and furnishes civil engineering, communications and operations support across Joint Base San Antonio; its airfield operations support is confined to JBSA-Lackland.

Lackland’s Defense Language Institute English Language Center, part of the Department of Defense, is divided into three sections — general English, specialized English and instructor development — to teach English to military students from more than 100 countries. The training may be as brief as nine weeks or last a full year. The center also brings U.S. service members who speak a primary language other than English, to English proficiency.

The Inter-American Air Forces Academy conducts almost 70 technical, professional and management courses in Spanish each year for just under 1,000 military and governmental students from as many as 18 Latin American countries. The academy moved in 1992 to Lackland from Homestead AFB, Florida, after Hurricane Andrew devastated that base. The academy’s mission is to promote inter-Americanism within Latin America by fostering interaction among its U.S., regional and worldwide counterparts so they can compare differences in viewpoints and military roles and better understand each other.

The 24th Air Force is the Air Force component of the U.S. Cyber Command; its warfighting domain is cyberspace, and one of its missions is to supply secure communications wherever needed. It also guarantees Air Force personnel, wherever they may be, the highest levels possible of network support and cybersecurity.