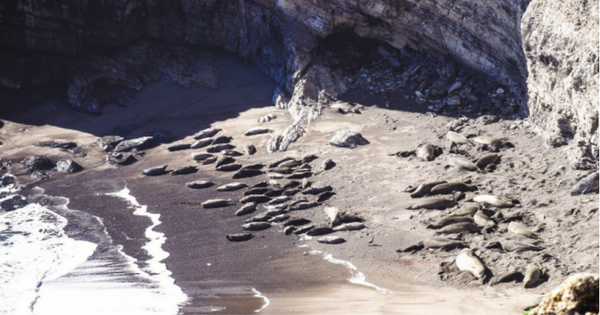 For thousands of years the Chumash tribe of Native Americans lived along California’s Central Coast and in interior valleys of the region now known as the county of Santa Barbara. Spanish ships explored the area, and by 1769 colonies were beginning to establish a series of missions and presidios. The Presidio of Santa Barbara was established in 1782, and Mission Santa Barbara followed four years later. The missionaries associated with Mission Santa Barbara are credited with planting the county’s now-famous wine grapes late in the 18th century.

Following the Mexican secularization of the missions in the 1830s, the mission pasture lands were divided into large ranchos and granted to citizens living in the area. But the end of the Mexican period came quickly for Santa Barbara. The Treaty of Cahuenga, signed Jan. 13, 1847, ended fighting in the Mexican-American War in California without any bloodshed in Santa Barbara.

The county of Santa Barbara was one of the 26 original counties formed in California at the time of statehood in 1850. The Southern Pacific Railroad commissioned writer Charles Nordhoff to write about Santa Barbara to draw people to the town. He is credited with starting the tourism boom in the 1870s that would lead to Santa Barbara becoming a world-famous resort destination.

In the 1890s, Summerland Oil Field was discovered, and its development began changing the local economy and landscape. Summerland was the site of the world’s first offshore oil well.

By 1901, Santa Barbara was accessible by both land and sea with the building of Stearn’s wharf to allow steamboat access and the completion of the railroad to both Los Angeles and San Francisco. Rail travel put an end to stagecoach travel through the San Marcos Pass.

Santa Barbara was the center of the U.S. silent film industry from 1910 to 1922. Flying A Studios covered two city blocks and was the largest movie studio in the world; it produced about 1,200 films.

The 1925 earthquake hit Santa Barbara hard and caused severe destruction. In rebuilding, the city took on its unified Spanish character through architectural reform.

World War II brought more change to the area. North of Point Conception the Army created Camp Cooke, which would later become Vandenberg Air Force Base. After the war ended, those who had seen Santa Barbara during the war came back to live. By the mid-1970s, opposition to uncontrolled growth led to limiting the city’s population to 85,000 through zoning, and water meters were denied to developments to limit growth in adjacent areas such as Goleta. The halt in growth led to sharp increases in housing prices.

Voters approved the connection to state water supplies in 1991 and growth resumed, though housing was in such short supply that less than 10 percent of the population could afford a median-value house in Santa Barbara. As a result, many workers in Santa Barbara commute from more affordable areas such as Santa Maria and Lompoc. By 2006, Santa Maria had become the county’s largest city, and it and its surrounding area continue to grow rapidly.