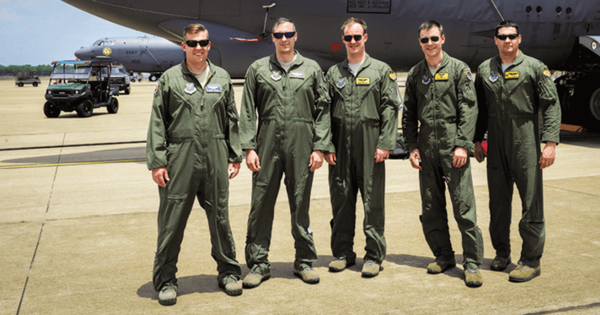 Shreveport residents were taking an interest in hosting a military flying field as early as 1924, a dream that eventually meshed with the needs of the 3rd Attack Wing, stationed at Fort Crockett, Texas, on Galveston Island, to expand its base by 500 percent and acquire at least 20,000 acres for aerial gunnery support and a bombing range.

In early 1928, prominent Shreveport citizens hired a young crop duster, Army Air Corps Capt. Harold Ross Harris, to fly over the local area and find a spot suitable for an airfield. Harris chose a sprawling section of a cotton plantation near Bossier City, Louisiana, and a delegation of citizens traveled to Washington, D.C., to propose it to the War Department.

After a site visit, the Army reported that the acreage met all Air Corps requirements: Shreveport was formally selected Dec. 5, 1928, and construction of the world’s largest airfield at that time began in 1931. More than 1,400 acres of cotton fields were plowed under and planted with Bermuda grass.

Barksdale Field, dedicated Feb. 2, 1933, became the home of the 3rd Attack Wing during the mid-1930s. The wing and its subordinate combat groups used Barksdale’s immense acreage on the East Reservation to hone gunnery and bombing skills, flying everything from P-12s and P-26 Peashooters to Curtiss A-8 “Shrikes” and Douglas B-18 Bolos.

The base turned to training bomber crews instead of pursuit and fighter crews in the 1940s using Martin B-26 Marauders, Boeing B-17 Flying Fortresses and Boeing B-29 Superfortresses. The famous 17th Bomb Group, led by Gen. Jimmy Doolittle, trained at Barksdale, as did the Free French and Nationalist Chinese aircrews.

In 1945, Barksdale became headquarters for the Air Training Command and began phasing out B-29 crew training.

Barksdale Field was renamed Barksdale Air Force Base shortly after the U.S. Air Force became an independent branch of service in January 1948. The next year, the base became home of the first Air Force all-jet strategic reconnaissance and bomber aircraft, the North American RB-45 Tornado, and to the 2nd Air Force Headquarters, bringing Barksdale into the Strategic Air Command.

The 301st and 376th bomb wings brought the Boeing B-47 Stratojet bomber and Boeing KC-97 Stratofreighter aerial tanker to the base during the 1950s.

In 1958, the base received Boeing’s newest pair of the strategic aircraft: the B-52 Stratofortress and the KC-135 Stratotanker.

The 2nd Bomb Wing transferred to Barksdale on April 1, 1963, from Hunter Air Force Base, Georgia, taking over the B-52 and KC-135 mission from the 4238th Strategic Wing. From 1965 and into the 1970s, the 2nd Bomb Wing routinely deployed aircraft and personnel to Southeast Asia for “Arc Light” (B-52) and “Young Tiger” (KC-135) missions to support the war in Vietnam, and operations over Vietnam dominated wing activities from 1972 through 1973.

Barksdale played significant roles in Operation Just Cause to restore democracy to Panama in December 1989, Operation Desert Shield in August 1990 and Operation Desert Storm in January 1991. The first combat sortie of Desert Storm was launched from Barksdale, when seven B-52Gs flew a 35-hour mission — the longest combat sortie in history at the time — to fire a barrage of conventional air-launched cruise missiles against Iraq. The B-52s from Barksdale that were deployed to Spain dropped 10 percent of all U.S. Air Force bombs during the Persian Gulf War.

B-52s and personnel from Barksdale were deployed to Diego Garcia in November 1998 in response to Iraq’s refusal to cooperate with U.N. weapons inspectors. U.S. military forces, including Barksdale’s B-52s, launched a sustained series of airstrikes against Iraq in a three-day-long campaign dubbed Operation Desert Fox.

From March to June 1999, Barksdale B-52s flew more than 180 combat sorties and released more than 6,600 weapons against military targets throughout the Federal Republic of Yugoslavia during NATO’s Operation Allied Force to halt the brutal Serb expulsion of ethnic Albanians from Kosovo.

Shortly after the terrorist attacks on Sept. 11, 2001, the National Command Authority called upon Barksdale forces to spearhead the global war on terrorism. Operating from overseas, Barksdale warriors and B-52s, both active and reserve, played a key role in Operation Enduring Freedom, the elimination of the repressive Taliban regime of Afghanistan and the destruction of al-Qaida leadership and training infrastructure.

In March 2003, Barksdale B-52s flew more than 150 combat sorties against military targets throughout the southern half of Iraq in a lightning campaign, Operation Iraqi Freedom, in which U.S. and coalition military forces ousted Saddam Hussein, paving the way for democracy in Iraq.

The men and women of Barksdale continue to serve both at home and abroad in support of the global war on terrorism. Operating from locations across the world, the 2nd Bomb Wing played a pivotal role in defeating the repressive regimes of Afghanistan and Iraq during Operations Enduring Freedom and Iraqi Freedom respectively while also deterring aggressors in the Pacific with its stabilizing presence at Andersen AFB, Guam.

Today, as the largest bomb wing in Air Force Global Strike Command and as a part of the historic “Mighty Eighth” Air Force, the wing continues to reflect the heritage of its motto Libertatem Defendimus: “Liberty We Defend.”