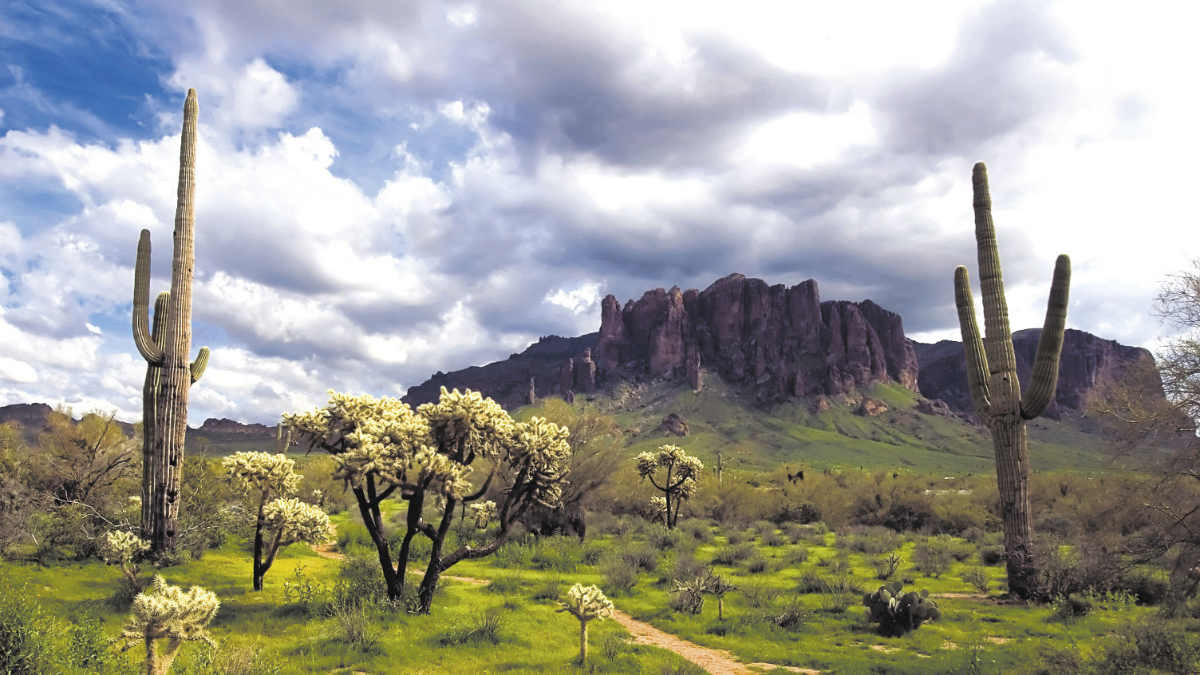 Arizona’s first inhabitants were Native Americans who many anthropologists believe migrated to the area 12,000 years ago across the land bridge that once connected Alaska to Russia. When they were the only inhabitants of the area, they lived in elaborate adobe dwellings, often as tall as a 10-story building. Many tribes, including the Apache, Hopi, Navajo, Tohono O’odham, Pima and several other small groups resided near what is now Phoenix.

Spaniards sent from Mexico in the early 1500s explored and claimed Arizona. When Mexico declared independence from Spain in 1821, Arizona flew the flag of Mexico until the United States acquired most of the land now known as New Mexico and Arizona in the $10 million Gadsden Purchase.

Arizona rapidly expanded after 1853 as ranchers and miners fought the Native Americans who were challenged by western expansion. Disputes between settlers and Natives worsened year by year, and by the 1880s, 20 percent of the U.S. Army was stationed in Arizona.

After Geronimo surrendered in 1886, the Apache Wars ended. Today, Arizona is home to 22 Native American tribes and many reservations.

The economy was boosted by completion of the Santa Fe and the Southern Pacific railroads in the late 1800s. A “Wild West” period descended on Arizona when outlaw gangs and renegade Natives roamed the territory. Public shootouts in places like Tombstone were common; the Gunfight at the O.K. Corral between the Earps and Clantons typifies the violence of the period.

The Arizona Rangers eventually restored order around the turn of the century. Since becoming the 48th state in 1912, Arizona has maintained its proud heritage while attracting thousands of new residents each year. In 1940, the population was less than 500,000. It’s now close to 7 million.

A pleasant climate, sweeping natural beauty and a strong economic base make Arizona an attractive place to live and work.

Arizona is strikingly beautiful. Deserts predominate in the south and breathtaking mountain ranges rise from the desert floor in the center of the state. Northern Arizona has its own mountains, high deserts and scenic canyons.

From the top of 12,633-foot Mount Humphreys near Flagstaff to the Colorado River in Yuma County, Arizona has much to offer virtually everyone. Popular sites include the Grand Canyon, Hoover Dam, the Painted Desert and the Petrified Forest, London Bridge at Lake Havasu City, the Sonoran Desert, the red rocks of Sedona, Old Tucson and hundreds of Western mining towns with fascinating histories.

Luke Air Force Base is in Maricopa County, about 20 miles northwest of central Phoenix. Though several communities surround the base, it was Glendale that annexed Luke AFB as part of its municipality. The base is about 5 miles from Glendale.

Glendale is a dynamic city in the rapidly growing northwest part of the Phoenix metropolitan area (known as the “Valley of the Sun”). With a population of over 240,000 residents, only five Arizona cities — Phoenix, Tucson, Mesa, Gilbert and Chandler — have more residents.

As with most of Arizona, Phoenix remains on Mountain Standard Time year-round with no changes for daylight saving time.

The local community provides outstanding support to the base. For example, the Fighter Country Partnership and Fighter Country Foundation were established to provide a high level of support for the men, women, families and mission of Luke Air Force Base.

Its members are business professionals, elected officials and military retirees as well as a diverse group of citizens who support the base and want to ensure its future in Arizona. Its board of directors and committees consist of prominent business and civic leaders from all over the Valley.

Annually, this organization’s volunteers support events and programs that have been identified as crucial to Luke AFB personnel. For instance, it supplies comfort items to Luke Airmen deployed overseas, conducts events for families of deployed Airmen and established the Luke Airmen Memorial Fund.

The base, likewise, contributes significantly to the local community. In addition to adding more than $2 billion each year to the Arizona economy, base members volunteer about 100,000 hours annually to community service.

The Phoenix area is rich in major medical resources, with specialized services for heart, kidney, head injury and mental health care equal to any other major medical community in the country.

In addition to modern hospital care, Maricopa Integrated Health System’s Arizona Burn Center has a comprehensive researcher team and the second-largest patient capacity in the nation.

Arizona’s education system is composed of 230 school districts, with more than 2,000 public schools, including more than 1,500 district schools and 500 charter schools. The state serves more than 1 million students. The public school system is divided into elementary, high school and unified districts. For more information on school districts in Arizona, visit the Arizona Department of Education at www.azed.gov.

Within a 15- to 20-mile radius of Luke Air Force Base, there are more than 15 schools with start dates for each varying from mid-August to the first week of September. Some districts operate on a year-round schedule. Base housing is divided by Glendale Avenue, which separates base housing residents into two school districts. Those north of Glendale Avenue in Saguaro Manor are in the Dysart School District. Those south of Glendale Avenue in Ocotillo Manor are in the Litchfield Elementary School District.

Military and family members assigned to Luke Air Force Base also have many opportunities to pursue higher education nearby. There are numerous educational and training facilities such as the Thunderbird School of Global Management, Glendale Community College and Estrella Mountain Community College. Arizona State University (ASU) is recognized as one of the finest educational institutions in the United States. Its enrollment exceeds 80,000. ASU has several campuses; ASU West Campus, in Glendale, is the closest to Luke Air Force Base. The Maricopa Community College system has 10 colleges and two skill centers around Phoenix. Other colleges and universities in the area serve a variety of educational needs.