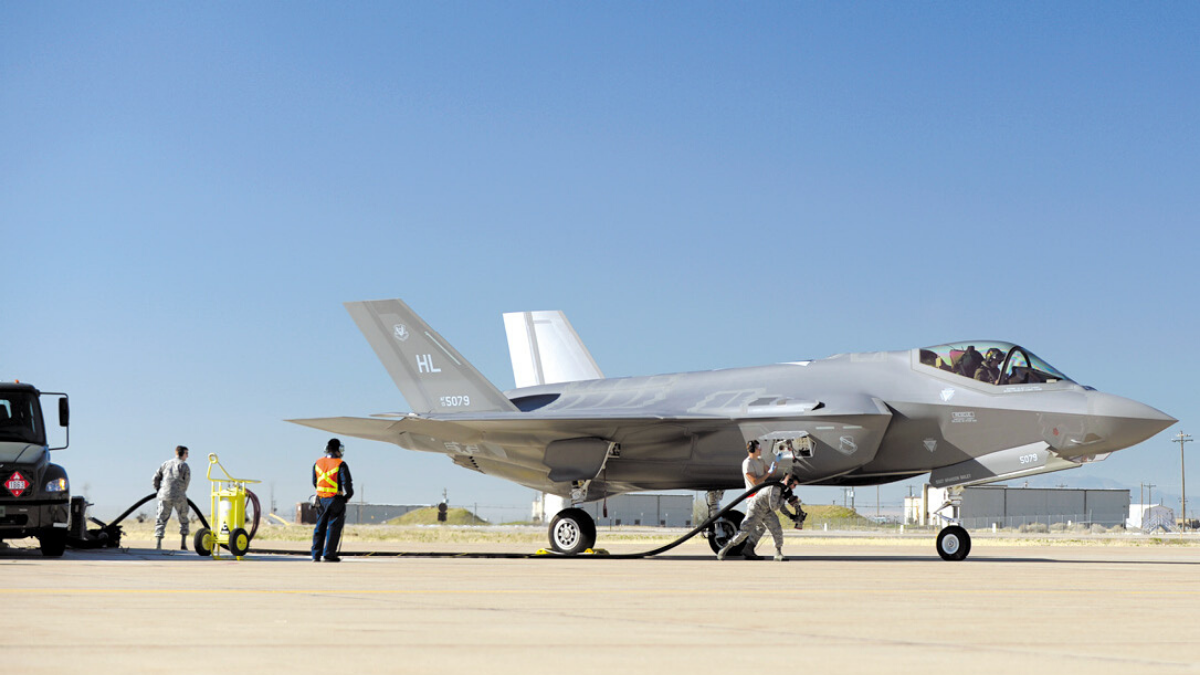 Hill Air Force Base — bordered by the colorful Wasatch Mountains on the east and overlooking the Great Salt Lake to the west — has tirelessly contributed to our nation’s defenses for 75 years. The installation reflects the rich history and heritage of the U.S. Air Force and, in particular, Air Force Materiel Command. Hill AFB traces its roots to 1934 when the operation of a temporary Air Corps depot in Salt Lake City, in place to support airmail operations, brought attention to senior military and civilian leaders, leading them to believe this area could be a possible site for a permanent air depot.

Henry “Hap” Arnold, who oversaw these airmail operations and succeeded “Billy” Mitchell as the nation’s leading advocate of an independent Air Force, was one of the military leaders who saw the need for a permanent air base in the Rocky Mountain region in 1934. Subsequently, representatives from the Ogden Chamber of Commerce, together with most of Utah’s congressional delegation, felt the same way and promoted the advantages of locating an intermountain air depot here through several selling points: good year-round flying weather; excellent climate for both storage purposes and living; center of transportation routes; adequate land, water, power, and labor force; and a strategic location inland to ensure maximum protection from possible enemy coastal attack.

By July 1934, the Air Corps Materiel Division (now Air Force Materiel Command) recommended that a depot be located in the Rocky Mountain region — and the wheels began moving in favor of Ogden. Congressional passage of the Wilcox Act in 1935 authorized site selection and construction of seven permanent Air Corps stations, one of which was to be a Rocky Mountain Air Depot. This prompted the Ogden City Chamber of Commerce in 1936 to take options on hundreds of acres adjoining the Ogden Arsenal and to donate the land to the U.S. government. Eventually, the Ogden, Utah, site was chosen for the future Rocky Mountain Air Depot.

By April 1939, the federal government had acquired nearly 3,000 acres of land held in escrow by the Ogden City Chamber of Commerce for the future Ogden Air Depot (forerunner of today’s Ogden Air Logistics Complex). Then, the Military Appropriations Bill for fiscal year 1940 passed Congress in June 1939; it included $8 million in funding for construction of the Rocky Mountain Air Depot near Ogden.

At the direction of Arnold, the site for the new depot was officially named Hill Field Dec. 1, 1939, in honor of Maj. Ployer P. “Pete” Hill, a renowned military test pilot.

Now, with funding and a name, official groundbreaking ceremonies occurred Jan. 12, 1940 — and Hill Field and its mission grew thereafter. Later that year, Col. Morris Berman, Ogden Air Depot’s first commanding officer, began his tour of duty Nov. 7, 1940, marking the formal activation of the first command on the installation. By January 1941, the hiring of the first civilian employee occured, as well as the arrival of the first enlisted man and the second officer, individuals who took charge of what was to be regional engineering and supply operations. From its sensible beginning, Ogden Air Depot strength grew to a World War II peak of nearly 22,000, comprised of approximately 15,780 civilians and 6,000 military personnel.

During World War II, the depot established a reputation for its repair and supply support for the wide variety of weapon systems in use by airmen. For example, the men and women at Hill Field repaired such aircraft as the B-17, B-24, B-26, P-40, P-47, A-20, AT-11 and several widely used reciprocating engines. Personnel also performed important wartime work at the nearby Wendover Range. At the range, scores of heavy bomber crews trained in air combat operations and aircraft/munitions maintenance and supply. Crew members of the 509th Composite Group, for example, practiced bombing runs in preparation for the Hiroshima and Nagasaki missions that assisted in ending World War II.

After World War II, on Sept. 18, 1947, the Army Air Forces became the U.S. Air Force, thus, after 40 years of effort, gained its independence from the Army. On Feb. 5, 1948, following an Air Force-wide policy of renaming fields as bases, Hill Field became Hill AFB.

In terms of mission demand, following World War II, workload and personnel strength on Hill AFB diminished substantially but then started an upward trend with the outbreak of hostilities in Korea in June 1950. Hundreds of B-26 and B-29 aircraft, long stored at Hill AFB, were rapidly returned to combat readiness by the men and women on Hill AFB for deployment to the Far East. Following the termination of the Korean conflict in July 1953, the depot’s maintenance production lines continued operations with work on jet fighter aircraft such as the F-84, F-89, F-101 and F-102. Hundreds of each returned to “fly and fight” service throughout the world.

After WWII and the Korean War, Hill AFB continued to grow and its mission became more complex. On April 1, 1955, Hill AFB’s acreage doubled in size when the Department of Defense transferred the Ogden Arsenal property from the Army to the Air Force. This is now known as the West Area of the base. The new acreage added more than 600 buildings and other structures to the Air Force mission. As a result, base capabilities increased substantially, including air munitions, rockets and missiles. By 1960, all Air Force munitions derived from this command through its 2701st Air munitions Wing. During this time the Ogden Air Materiel Area also supported U.S. Air Force global operations, helping counter the Soviet Union threat by supporting a wide range of weapon systems, including the Minuteman intercontinental ballistic missile (ICBM). Combat operations support throughout Southeast Asia was another operation of the base at this time.

Then, in 1982, the Ogden Air Logistics Center was designated as logistics system manager of the Peacekeeper ICBM. Hill AFB’s depot personnel also assumed a significant portion of the DOD’s C-130 Hercules fleet’s depot maintenance during this time.

In 1990 and 1991, the Ogden Air Logistics Center and Hill AFB’s tenant units supported Operation Desert Shield and Operation Desert Storm — and continued to take on new missions. To sustain this conflict, initially during Desert Shield, all Ogden Air Logistics Center shifts extended to meet mission demands. From the operations side of the house, the 388th Fighter Wing and 419th Fighter Wing (then called Tactical Fighter Wings) provided combat support through the F-16 weapon system. During this period, the end of the Cold War occurred and so did the subsequent closures of air depots at Sacramento and San Antonio. Absorbing some of the work from these closures, Hill AFB assumed responsibility for the A-10 Warthog, both maintenance and engineering support.

At the onset of the 21st century, the Ogden Air Logistics Center was one of three U.S. Air Force depots as they began their massive effort in supporting the war on terrorism through increased engineering, sustainment/logistics management, and maintenance support for many of the Air Force’s weapon systems — Minuteman III, C-130, F-16, A-10 and F-22, to name a few.

As the Air Force continued heavy use of their aircraft in Operation Enduring Freedom and Operation Iraqi Freedom, the Center stepped up its efforts to modernize and sustain the service’s legacy aircraft to increase their service life, which still continues today.

In addition to maintenance and acquisition support, several operational units on base — 388th Fighter Wing and 419th Fighter Wing — have been in constant deployment rotations to the Middle East and Southwest Asia during the past decade, providing aerial support by way of the F-16.

More recently, in 2013, the Air Force announced it was consolidating depot maintenance for the F-22 Raptor at the Ogden Air Logistics Complex. That same year, the base was selected as the new home for the Air Force’s first operational F-35A Lightning II Joint Strike Fighters, the DOD’s fifth-generation fighter aircraft. Then, in 2014, base members began executing depot maintenance on the F-35.

In its current state, Hill Air Force Base remains active in supporting the warfighter in the air and on the ground. From just over 3,000 acres in 1939, Hill AFB has grown to encompass more than 6,000 acres in both Davis and Weber counties, with management of an additional 900,000 plus acres throughout northern Utah. Hill AFB is the state’s leading single-site employer, currently providing employment for more than 20,000 military and civilian personnel within the Ogden Air Logistics Complex, 75th Air Base Wing, 388th Fighter Wing, 419th Fighter Wing, Air Force Nuclear Weapon Center and other tenant organizations.

Today’s warfighters and their families carry on the sacrifice and achievement of America’s pioneering Airmen. Hill’s Airmen have pushed the limits of imagination and technology to excel in air, space and now cyberspace. The base remains committed to the Air Force’s core values — integrity first, service before self and excellence in all we do — and is resolved to expand the reach toward new horizons.