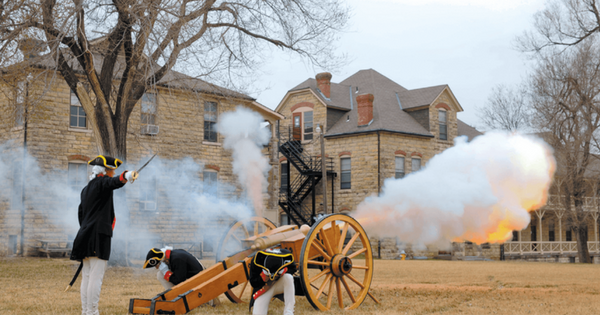 Fort Riley is named in honor of Maj. Gen. Bennett C. Riley, who enjoyed a long and distinguished military career that stretched from the War of 1812 to the Mexican War. Later he commanded the first military escort along the Santa Fe Trail in 1829.

He also served as the last territorial governor of California. He died in June 1853 and is buried in Buffalo, New York.

Fort Riley has always had an important role in the defense of our nation and the training of our Soldiers, and its early history is closely tied to the movement of people and trade along the Oregon and Santa Fe trails.

The fort was established in 1853 as a military post originally called Camp Center. Its mission was to protect the movement of people and trade over the Oregon-California and Santa Fe trails. These routes, a result of the perceived “Manifest Destiny” in the mid-19th century, extended American domination and interests into the far reaches of a largely unsettled territory. During the 1850s, a number of military posts were established at strategic points to provide protection along these arteries of emigration and commerce.

In the fall of 1852, a surveying party under the command of Capt. Robert Chilton, 1st U.S. Dragoons, selected the junction of the Republican and Smoky Hill rivers as a site for one of these forts. This location, approved by the War Department in January 1853, offered an advantageous location from which to organize, train and equip troops in protecting the overland trails. Surveyors believed the location was near the center of the United States and named the site Camp Center. During the late spring, three companies of the 6th Infantry occupied the camp and began construction of temporary quarters. On June 27, 1853, Camp Center became Fort Riley, and the post took shape around a broad plain that overlooked the Kansas River valley.

The fort’s design followed the standard frontier post configuration: buildings constructed of the most readily available material — in this case, native limestone. In the spring, troops were dispatched to escort mail trains and protect travel routes across the plains. At the fort, additional buildings were constructed under the supervision of Capt. Edmund Ogden.

Anticipating greater use of the post, Congress authorized appropriations in the spring of 1855 to provide additional quarters and stables for the Dragoons. Ogden again marshaled resources and arrived from Leavenworth in July with 56 mule teams loaded with materials, craftsmen and laborers.

Work had progressed several weeks when cholera broke out among the workers. The epidemic lasted only a few days but claimed 70 lives, including Ogden’s. Work gradually resumed, and buildings were readied for the October arrival of the 2nd Dragoons. As the fort began to take shape, an issue soon to dominate the national scene was debated during the brief territorial legislative session, which met at Pawnee in the present area of Camp Whitside. The first territorial legislature met there in July 1855. Slavery was a fact of life and an issue within the garrison just as it was in the rest of the country. The seeds of sectional discord were emerging that would lead to increased tension and bloodshed between pro- and anti-slavery settlers resulted in the use of the Army to “police” the troubled territory. They also continued to guard and patrol the Santa Fe Trail in 1859 and 1860 due to increased Indian threats.

The outbreak of hostilities between the North and South in 1861 disrupted garrison life. Regular units returned east to participate in the Civil War while militia units from Kansas and other states used Riley as a base from which to launch campaigns to show the flag and offer a degree of protection to trading caravans using the Santa Fe Trail. In the early stages of the war, the fort was used to confine Confederate prisoners.