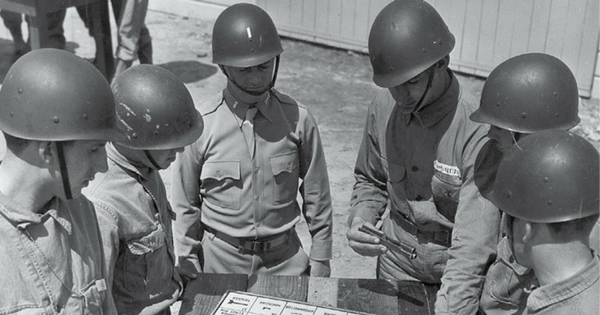 The United States’ entry into World War I required the training of thousands of Soldiers across the nation. During the summer and fall of 1917, facilities were greatly expanded and a cantonment named Camp Funston was built 5 miles east of the permanent post. This training site was one of 16 across the country and could accommodate 30,000 to 50,000 men.

The first division to train at Camp Funston, the 89th, sailed for France in the spring of 1918. The 10th Division also received training at Funston, but the armistice came before the unit was sent overseas. The camp was commanded by Maj. Gen. Leonard Wood. A Military Officers Training Camp was established in the Camp Whitside area to train doctors and other medical personnel.

Armistice Day, Nov. 11, 1918, beckoned to a world made safe for democracy and one that heralded a new day for the horse cavalry. The War Department directed service schools be created for all arms of service. As a result, in 1919, the Mounted Service School, which had ceased to function during the war, was redesignated as the Cavalry School. The change was sudden and abrupt.

The new school recognized the need for courses broader in scope while at the same time being more general in character.

Gathering war clouds in Europe and Asia during the late 1930s caused some military planners to prepare for possible U.S. involvement. This led to several important developments at Fort Riley.

The first was the rebuilding of Camp Funston and the stationing of the 2nd Cavalry Division there in December 1940. Barracks were built in the area known as Republican Flats and renamed Camp Forsyth. In addition, 32,000 acres were added to the post for training purposes. These efforts were brought into sharp focus with America’s entry into World War II.

Over the next four years, approximately 125,000 Soldiers were trained at these facilities. Notable trainees included heavyweight boxing champion Joe Louis and motion picture stars such as Mickey Rooney. The post also received a presidential visit by Franklin Roosevelt on Easter Sunday in 1943.

The 9th Armored Division was organized in July 1942, and after its deployment, Camp Funston was used as a prisoner-of-war camp. The arrival of victory in Europe and Japan during the spring and summer of 1945 were joyous occasions. However, they also spelled new realities and directions for the Army and Fort Riley.

In the aftermath of World War II, the fort experienced a period of transition. The Cavalry School ceased operation in November 1946, and the last tactical horse unit inactivated the following March. Replacing the Cavalry School was the Ground General School, which trained newly commissioned officers in basic military subjects.

An officer’s candidate course was conducted, along with training officers and enlisted men in intelligence techniques and methods. The 10th Infantry Division, one of 10 Army training divisions, was activated at Camp Funston in August 1948. The 16-week basic military program conducted by this division prepared Soldiers for infantry combat and duty with other infantry units.

The invasion of South Korea by North Korean forces in June 1950 once again brought attention to Fort Riley as an important training facility. Over the next few years, recruits from all across the United States came to Fort Riley and received basic training.

The 37th Infantry Division, made up of units from the Ohio National Guard, was also stationed there during the conflict. While they were not sent overseas, their presence was a continuing reinforcement of the fort’s importance as a training post.

The uneasy truce that settled on the Korean peninsula after 1953 was indicative of a cold war that had come to characterize relations between the United States and the Soviet Union. This would have an impact on Fort Riley.

In 1955, the fort’s utilization changed from training and educational center to that of being the home base for a major infantry division. In that year, the 10th Division rotated to Germany as part of Operation Gyroscope and was replaced by the 1st Infantry Division. Elements of the Big Red One began arriving in July 1955, and over the next five months the remaining units arrived. They initially occupied barracks in Camp Funston.

The influx of troops and dependents placed new demands on the fort’s infrastructure. Work began on Custer Hill where new quarters, barracks and work areas were constructed. A new hospital, named in honor of Maj. Gen. B.J.D. Irwin, was constructed to provide medical care.

In the decade following, 1st Infantry Division units trained to respond to any threat that might arise in Europe or other parts of the world. Construction of the Berlin Wall in 1961 and the Cuban missile crisis the following year witnessed heightened alert for Soldiers stationed at Fort Riley.

An additional 50,000 acres were also acquired in 1966, which enabled the Army to have an adequate training area for the division’s two brigades.

Following nearly five years of combat in Vietnam, the 1st Infantry Division returned to Fort Riley in April 1970 and assumed the NATO commitment. The division’s 3rd Brigade was stationed in West Germany. During the 1970s and the 1980s, 1st Infantry Division Soldiers were periodically deployed on Return of Forces to Germany exercises.

Reserve Officer Training Corps summer camps were also held at the fort, which permitted troops to demonstrate and teach their skills to aspiring second lieutenants. The fort also hosted the model U.S. Army Correctional Brigade, housed in Camp Funston, and the 3rd ROTC Region Headquarters until their inactivation in 1992.

In August 1990, Iraq invaded its neighbor, Kuwait. The resulting international outcry led to the largest U.S. troop build-up and deployment overseas since the Vietnam War. In the fall of that year, Fort Riley was notified to begin mobilization of troops and equipment for deployment to the Persian Gulf. Between November 1990 and January 1991, men and equipment were deployed overseas.

In addition to the 1st Infantry Division, 27 non-divisional units were deployed, and 24 Reserve components were mobilized. This amounted to 15,180 Soldiers being sent overseas via 115 aircraft. Over 2,000 railcars transported 3,000 short tons of equipment, which were then shipped to theater on 18 vessels.

Once in theater, these Soldiers and equipment were readied for combat. This commenced in late February 1991, and over the course of the “hundred hours” combat of Operation Desert Storm, these Soldiers carried out their orders and executed their missions that resulted in the crushing of Saddam Hussein’s touted Republican Guards. Later that spring, Soldiers returned to Fort Riley.