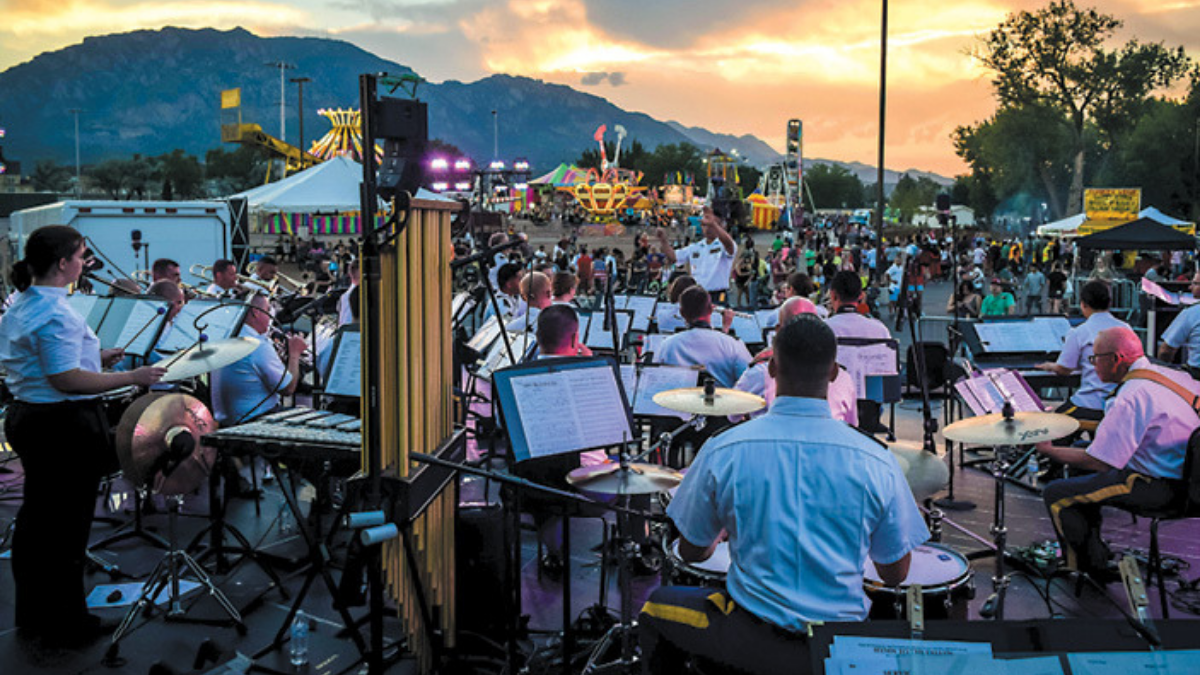 The Continental Army of 1776 depended upon quality musicians for regimental drill. The inspiration of the marching band was a significant contribution in the victory at the Battle of Bennington in 1777 as the band led the troops to the battle. By 1832, almost all regiments had a band, and by mid-19th century, regiments had additional field musicians of drummers and buglers to sound calls for specific times and to transmit commands
in battle.

From the first formations of the Continental Army, bands were included in the ranks to provide music for two main purposes: ceremonial functions and bolstering troop morale. Army bands have borne the customs and traditions of the Army service, incorporating the legends and practices of the past, and representing them in the present. The band carries lineage and tradition of their units into the public view as they march as the vanguard of a wide variety of traditional ceremonies. The mace, the baldric, and the drums of an Army band display the battle honors of the division or unit it serves. In ways that written or spoken language cannot adequately convey, the patriotic music encourages an element of bonded spirit among all Soldiers. Army bands are a living testament of Army tradition.

Redesignated Dec. 1, 1943, as the 4th Infantry Division Band, the band traveled to Europe with the division and performed in England, France and Germany during World War II. The band’s tour lasted until early 1946 and entitled the band to battle streamers for Normandy, Northern France, Rhineland, Ardennes-Alsace, and Central Europe. Upon returning to Camp Butner, N.C., the band was deactivated March 12, 1946.

The band was reactivated July 15, 1947, at Fort Ord, Calif., and traveled to Fort Benning, Ga., before moving to Germany in 1951. The 4th Infantry Division Band stayed in Germany supporting the North Atlantic Treaty Organization from 1951-1956 when it returned to the United States and was stationed at Fort Lewis, Wash.

On Nov. 1, 1965, the band was reorganized and redesignated as Headquarters, Headquarters Company and Band, 4th Infantry Division Support Command.

The band returned to the United States and moved to Fort Carson where it stayed from 1970 to 1995. In 1995, the band moved with the Headquarters, 4th Infantry Division to Fort Hood, Texas. During the period of persistent conflict since 2001, the 4th Infantry Division Band has supported Operation Iraqi Freedom three times, resulting in the awarding of three more Meritorious Unit Commendations.

After a 14-year absence, the 4th Infantry Division Band has returned to Fort Carson. Half of the band deployed in support of Operation New Dawn in 2010. The band’s modular approach to deployment allowed it to support USD-North and the Fort Carson and Colorado Springs communities simultaneously.

If interested in requesting the 4th Infantry Division Band, completion of a Department of Defense Form 2536 https://www.carson.army.mil/assets/docs/pao/dd-2536.pdf is required. Please complete and email the form to usarmy.carson.hqda-ocpa.list.pao-comrel@mail.mil as soon as possible. Submitting the attached form a year prior to your event is recommended; however, a minimum of a 180-day advance notice is now required when requesting external community support from Fort Carson.