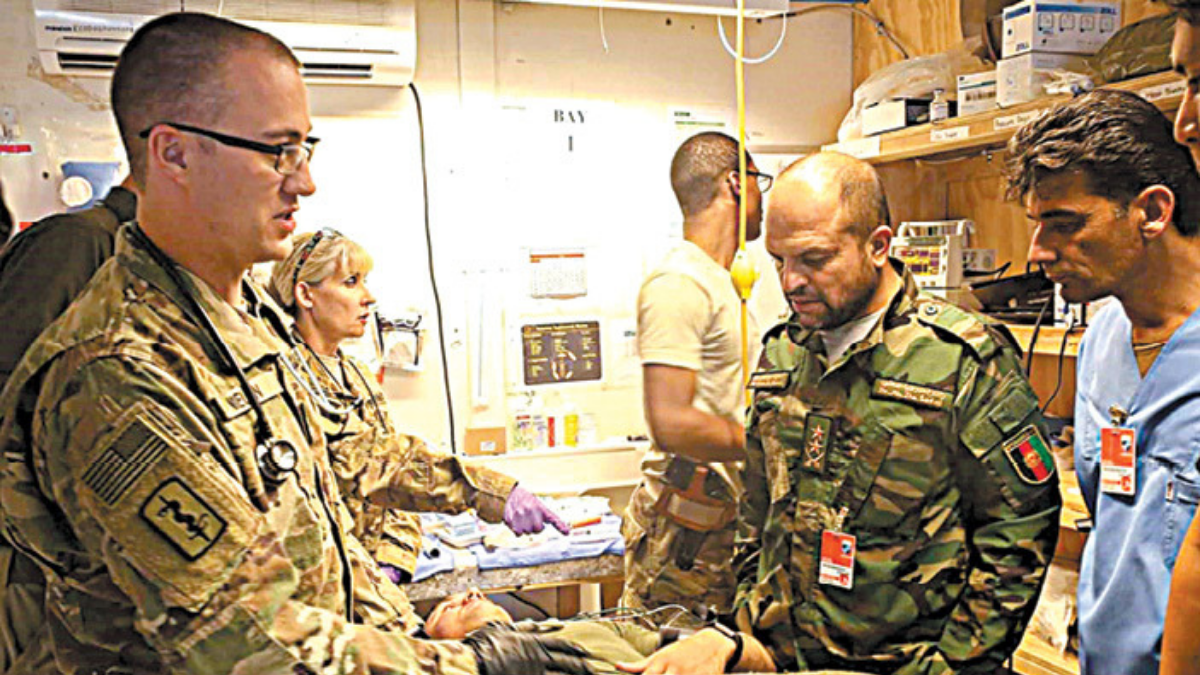 Fort Carson’s original hospital was erected in 1942 and was located between what is now Prussman Boulevard and Woodfill Road. It was made of cinderblock construction and painted buff. The ward buildings were two stories, one ward per floor, with a total of 24 buildings and 48 wards. The buildings were connected with covered cement block corridors. The hospital was designed for a normal bed capacity of 1,726 with an expansion capacity of 2,000 beds.

In July 1942, the hospital was organized as an Army Service Forces Station Hospital with a bed authorization varying from 600-1,200, depending on fluctuations in troop density. Army Service Forces Unit #5022 operated the hospital. The ASU number was an administrative designation for the unit, but the organization was usually referred to as U.S. Army Hospital Camp Fort Carson.

In May 1946, the Veterans Administration contracted for 100 of the station hospital’s beds. The need for bed capacity decreased after the cessation of hostilities in World War II, and by July 1947, the requirement for the Veterans Administration contract beds was eliminated. The station hospital was reduced to 100 authorized beds. This level remained in effect from 1948 to 1949.

The need for specialization gradually diminished and only the mission of a Class I station hospital existed by March 1, 1954.

The USAMEDDAC-Fort Carson’s mission remained the same until April 1968, when the hospital was given the additional responsibility of providing care for Vietnam War returnees. The bed capacity was increased to 340 on Oct. 1, 1968.

The post-Vietnam drawdown saw doctor shortages in the active force and fostered the routine use of large numbers of civilian health care providers in Army medical treatment facilities.

In 1970, planning began for the new Fort Carson Hospital. It was dedicated on June 5, 1986, and occupied in July. Evans Army Community Hospital is named in honor of Spec. 4 Donald W. Evans Jr., a member of Company A, 2nd Battalion, 12th Infantry Regiment, 4th Infantry Division. Evans was awarded the Medal of Honor for his actions at Tri Tam, Republic of Vietnam, where he gave his life while administering medical aid to his fellow Soldiers.

The hospital is comprised of two distinct buildings separated by a glass-covered common area or atrium. The five-story tower on the north side of the hospital houses all inpatient units, the operating suite, the labor/delivery suite, nursery, radiology, emergency room and the nutrition care division. The two-story clinic building contains a family medicine clinic and other outpatient clinics. The atrium, which provides the main entries into the hospital, also houses patient services, such as an outpatient pharmacy, admissions and dispositions, the hospital treasurer, a gift shop and a chapel.

Adjacent to the hospital is the Woods Soldier Family Care Center. This is named for Sgt. Eric P. Woods, who served as a combat medic with the 3rd Armored Cavalry Regiment and was killed in action in July 2005 during combat operations in Iraq. The WSFCC houses numerous outpatient medical clinics, outpatient records, physical therapy, a family medicine clinic and a dental clinic.

In 2007, the USAMEDCOM established a Fort Carson Warrior Transition Battalion under the command of USAMEDDAC.

The USAMEDDAC currently employs about 2,300 military and civilian staff professionals who serve a population of about 70,000 enrolled TRICARE beneficiaries from all military services, family members and retirees.

The hospital was first accredited by the Joint Commission on Accreditation of Healthcare Organizations in October 1954. Subsequent surveys have reaffirmed the hospital’s full accreditation status.