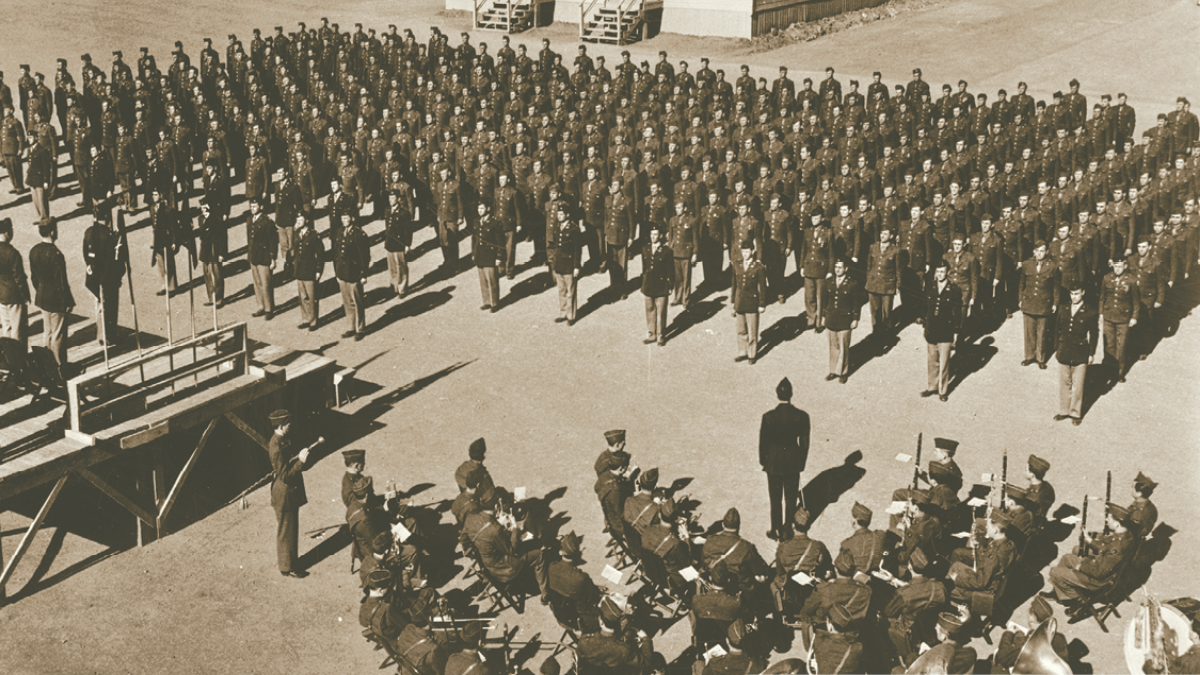 Fort Carson was established in 1942, following Japan’s attack on Pearl Harbor. The city of Colorado Springs purchased land south of the city and donated it to the War Department. Construction began immediately, and the first building, the camp headquarters, was completed Jan. 31, 1942.

Camp Carson was named in honor of legendary Army scout Gen. Christopher “Kit” Carson, who explored much of the West in the 1800s.

At the construction’s peak, approximately 11,500 workers were employed on various construction projects at the new camp. Facilities were provided for 35,173 enlisted men, 1,818 officers and 592 nurses. Nearly all of the buildings were of the mobilization-type construction with wood-sided exteriors. The hospital was of the semipermanent-type concrete block and had space for 1,726 beds with an expansion capability to 2,000 beds.

Camp Carson was also home to nearly 9,000 Axis prisoners of war — mostly Italians and Germans. The internment camp at Camp Carson opened on the first day of 1943. These POWs alleviated the manpower shortage in Colorado by doing general farm work, canning tomatoes, cutting corn and aiding in logging operations on Colorado’s Western Slope.

Between 1942 and 1956, pack mules were a common sight at Camp Carson. The first shipment arrived by train from Nebraska in July 1942. The mules were used by field artillery (pack) battalions to carry equipment, weapons and supplies over mountainous terrain.

The most famous of these animals was Hambone, the pride of the 4th Field Artillery. For 13 years he carried first sergeants up Ute Pass to Camp Hale. Camp Hale, located near Leadville, Colorado, was where the Army conducted cold weather and mountain warfare training. Hambone died in March 1971, and was buried with full military honors.

Activity at Camp Carson was greatly reduced following the end of World War II. By April 1946, the military strength at the Mountain Post had dropped to about 600. It appeared Camp Carson would be closed.

With the onset of the Korean War, however, activity once again increased. Many Reserve and National Guard units were called to active duty and stationed at Camp Carson.

Camp Carson became Fort Carson in 1954. In the 1960s, mechanized units were assigned to the Mountain Post. At this time, additional training land was purchased, bringing the post to its current size of 137,403 acres. An additional training area, comprising 235,300 acres, was purchased in September 1983. Named the Piñon Canyon Maneuver Site, this training area is about 150 miles to the southeast and is used for large force-on-force maneuver training. Comprehensive maneuver and live-fire training also occurs downrange at Fort Carson. Exercises and deployments continually hone the skills of Fort Carson Soldiers. When not deployed, Soldiers train annually at Piñon Canyon Maneuver Site and the National Training Center at Fort Irwin, California.

Additionally, units participate in joint exercises around the world, including Central and Southern Africa, Europe and Southwest Asia. Since 2003, most Fort Carson units have been deployed in support of the global war on terrorism. In 1999, Fort Carson became the home of the first Active Component-Reserve Component Division in the U.S. Army when the 7th Infantry Division was reactivated. In 2006, the 7th ID was inactivated when Division West, First Army, was activated, with the mission to be responsible for the readiness and training of Army Reserve and National Guard units west of the Mississippi. In 2009, Division West moved to Fort Hood, Texas. At the same time, the 4th Infantry Division, which had just returned to Fort Hood from deployment in support of Operation Iraqi Freedom, relocated back to Fort Carson, where it had been previously headquartered from 1970 to 1995.

Throughout its history, Fort Carson Soldiers and units have been active, supporting various community events throughout Colorado. Soldiers from the Mountain Post have conducted firefighting missions in the national forests, search-and-rescue missions throughout the state and various other emergency operations. The Mountain Post supports more than 250 community events, such as parades, concerts and fairs every year.

In April 2011, Fort Carson was designated as one of two Army “Net Zero” installations that will pursue net zero energy, water and waste by 2020.

Also in April 2011, it was announced that 4th Infantry Division and Fort Carson would receive a combat aviation brigade, and the 4th Combat Aviation Brigade stood up in July 2013.

In 2016, Fort Carson opened the Mountain Post Soldier Center, an innovative facility that houses virtually all of the services Soldiers need to prepare for deployment, inprocess and outprocess, including the Soldier Readiness Processing, finance, medical requirements, a pharmacy, a Department of Motor Vehicles branch, orders and many more. The facility is located in building 1525 on Wetzel Avenue.

In 2017, 4th Infantry Division and Fort Carson celebrated the 100th anniversary of the 4th Inf. Div with a variety of large-scale events on Fort Carson, such as Iron Horse Week activities and a concert open to the public. Colorado Springs also recognized the division’s centennial during a Veterans Day Parade. In 2018, Department of the Army announced the conversion of the 2nd Infantry Brigade Combat Team to a Stryker Brigade Combat Team and that a new 4th Security Force Assistance Brigade (SFAB) will be stood up at Fort Carson. SFABs are specialized units whose core mission is to conduct advise-and-assist operations with allied and partner nations. Also in 2018, 4th Infantry Division headquarters deployed to Afghanistan for Operation Freedom’s Sentinel.