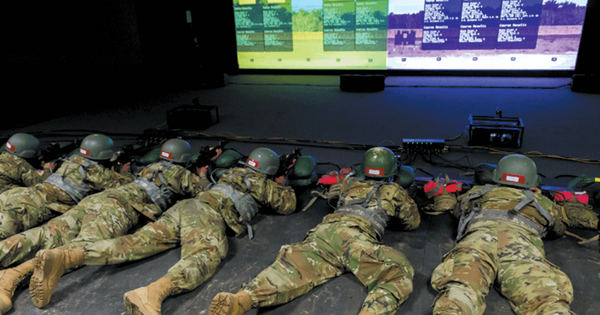 The commandant of the U.S. Army Military Police School (USAMPS) is responsible for ensuring that the vision for MP profession and regiment is nested with and consistent with the CG and MSCoE. The commandant serves as the military police branch proponent with primary responsibility for training, leader development and personnel for the branch and works to integrate those into and across doctrine, organizations, training, materiel, leadership and education, personnel and facilities. The commandant focuses on the needs of the military police force while teaming with the other commandants and the DtCG to recommend to the CG changes to doctrine, organizational construct, training and leader development, and materiel solutions. Using military expertise, the commandant is responsible to exercise internal lead, in concert with the DCG (in the alternate CDID SES role), for development and integration of the following: MP force structure and capabilities development for detainee operations, military working dogs, and nonlethal and scalable effects. The commandant may speak and brief on behalf of the CG for the same areas; exercises command responsibilities for 14th Military Police Brigade; serves as principal adviser in all command matters; and is authorized to give orders, directions and guidance, which have the same force and effect as those given by the CG.

As the Law Enforcement Center of Excellence, the school trains military police leaders and Soldiers to serve across the full spectrum of military operations from stability and support operations to major theater conflicts.

The Military Police School is responsible to ensure integration of all DOTMLPF-P domains in order to provide the units, equipment and trained personnel necessary to successfully conduct the Military Police Corps missions expected by the combatant commanders.

The 14th Military Police Brigade is task organized into three battalions. These battalions are responsible for training Military Police Basic Officer Leadership Course B, Captains Career Course, One Station Unit Training of MOS 31B Soldiers, AIT for 31E Soldiers and military occupational skills training (MOS-T) for reclassifying Soldiers. The brigade’s mission is to train and provide combat-ready, disciplined, motivated, physically fit and technically competent military police Soldiers and leaders to Combatant commanders inculcated with the Army Values and Warrior Ethos; capable of immediately contributing to their next unit’s mission, and able to survive in any environment.

The 701st Military Police Battalion is responsible for oversight and management of more than 53 technical courses of instruction. The battalion is also the owner and operator of the Army’s premier Detainee Operations Training Facility, Camp Charlie, which replicates detainee facilities within the COE, facilitating training of all initial entry MP Soldiers.

All levels of training are enhanced by some of the most modern training facilities within the U.S. Army. A majority of the premier law enforcement training is conducted at Stem Village, a mock city at Fort Leonard Wood and named in honor of Brig. Gen. David Stem, Military Police Corps Regiment commandant from June 1985 to January 1987.

The village covers 77,670 square feet and is constructed of dual-purpose buildings. For example, a movie theater in the facility also contains weapons training classrooms, including an Engagement Skill Trainer, which simulates marksmanship training for the weapons systems employed by MP Soldiers. Additional USAMPS training facilities include urban operations training area that has been modified to resemble urban terrain that Soldiers will encounter in contemporary operational environments.

The Basic Military Police Training Division trains newly recruited Soldiers and Marines in basic and advanced MP skills utilizing the mock MP station, bar, strip mall and gymnasium. At the same time, the Advanced Law Enforcement Training Division is training nine different courses from special police operations to anti- terrorism and counterdrug. This portion of the village contains a tactical clearing complex for Special Reaction Team and Protective Service training, complete with a credit union, shoppette, health clinic, government quarters and several other buildings the team might encounter on a military base.

Each facility contains surveillance systems, inside and out, to record the training for immediate feedback to the students on what went right and what mistakes need to be corrected. The village also contains mock quarters for the student investigators to train on crime scene processing and child abuse prevention, as well as a mock confinement facility for training military police corrections specialists. TA 210 supports anti-terrorism evasive driving training for students ranging from DOD executive staff drivers to general officers and other select personnel. This facility supports the most realistic evasive driving training the Army has to offer.

By providing the best possible training to thousands of Soldiers, Airmen, Sailors, Marines and civilians, the Military Police Corps Regiment helps provide the best protectors in the world who serve with the greatest vigilance while on guard for our nation.