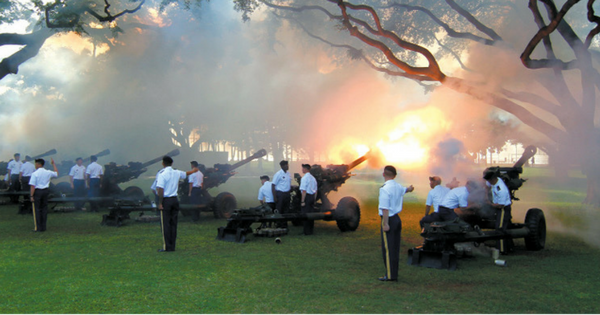 The site which was to become Schofield Barracks was ceded to the U.S. government July 26, 1899, less than a year after Hawaii was annexed to the United States. The Waianae Uka military reservation was part of the former Hawaiian Crown Lands and consisted of 14,400 acres. These acres, between the two major mountain ranges on Oahu, provided central access to both the North Shore of Oahu and the Pearl Harbor naval base and the city of Honolulu to the south. While the area’s strategic defense value was recognized, it was initially passed over as a site for a principal military post because of the lack of a readily available water source.

On Dec. 4, 1908, Capt. Joseph C. Castner, construction quartermaster, arrived on Oahu to begin construction of a temporary cantonment on the Waianae Uka military reservation. Castner, with the help of local laborers, constructed tents for the officers and men, followed by temporary wooden barracks.

The cantonment was informally known as Castner Village among military personnel. In April 1909, the War Department named the post after the late Gen. John M. Schofield, former commanding general of the U.S. Army, who had originally called attention to Hawaii’s strategic value.

In 1910, the U.S. Army District of Hawaii was formed under the command of Col. Walter Schuyler at Schofield Barracks. It originally fell under the jurisdiction of the Department of California, then became a department in the newly organized Western Division. The number of troops continued to increase, and in 1913, the Hawaiian Department was formed as an independent command under the War Department. Schofield Barracks’ population numbered about 6,000 men by 1914, with the 1st Field Artillery, 1st Infantry Regiment, 25th Infantry Regiment and 4th Cavalry all garrisoned at Schofield.

In April 1917, the United States entered the war in Europe. In August 1917, an officer’s training school was established at Schofield. Out of 100 students, 68 were local Oahu residents of Hawaiian, Chinese and Japanese extraction. Three other training camps followed in 1918. Soon, all of Schofield Barracks was called to war. The 1st and 9th field artilleries were the first to go in December 1917. The 1st Infantry, 32nd Infantry, 25th Infantry and the 4th Cavalry had all gone by October 1918.

The Hawaiian National Guard was mustered into federal service and assigned to Schofield Barracks for training and as post caretakers. The newly formed 1st and 2nd Hawaiian infantry regiments were fully manned at 1,400 men each. With the signing of the Armistice in November 1918, strenuous training of these regiments was no longer essential. The energies of the Hawaiian infantry regiments were turned to beautifying of the post. They planted shrubs, seeded lawns, built roads and landscaped around the existing structures. The great eucalyptus and Norfolk pine trees lining the post roads are part of this body of work.

The 17th Cavalry arrived in August 1919, and the Hawaiian infantry regiments were demobilized. Brig. Gen. Joseph E. Kuhn arrived in 1920 with the 35th and 44th infantry regiments. They were followed in 1921 by the 8th, 11th and 13th field artillery regiments and the 3rd Engineers. After a brief pause for World War I, Schofield Barracks had reached its seven-regiment promise.

In 1921, this became the Hawaiian Division. Schofield housed the only complete division in the U.S. Army and the Army’s largest single garrison. The population rose to 14,000 in 1938, making it the second-largest city in Hawaii.

On Oct. 1, 1941, the transition by the War Department from the square division to the triangular division allowed for the formation of two new divisions to replace the Hawaiian Division. The 19th and 21st infantry regiments formed the 24th Infantry Division, while the 35th and 27th infantry regiments formed the 25th Infantry Division. Only 10 weeks after the restructuring, the Japanese flew over Schofield on a Sunday morning and dropped their bombs on Wheeler Army Airfield. War was declared again.

While Schofield received some strafing from Japanese planes flying over the barracks, Schofield was not the focus of the Japanese attack. Their target was nearby Wheeler Army Airfield and the planes located there.

A Host to Millions

Within a year, the newly formed 24th and 25th divisions were sent to fight the war in the Pacific. However, Schofield did not remain a ghost town. The need for soldiers trained to fight under tropical conditions arose and the Jungle Training Center, later called the Ranger Combat Training School, was formed in late 1942. Almost 1 million men went through the training center at Schofield before being sent overseas, and many soldiers were housed on Schofield. Facilities and training areas were increased and the Olympic-size Richardson Pool was built for combat training.

Instead of returning to Schofield at the end of the war, the 24th and 25th infantry divisions remained in Japan with the occupying forces. The population sank to an all-time low of 2,000 in the late 1940s.

When the 25th Infantry Division finally did return in September 1954, it increased Hawaii’s overall population by 5 percent. Military expenditures in the state increased, and the unemployment rate fell.

The soldiers who returned in 1954 were different from the men who had left in 1941. The typical NCO was married and raising a family. Soldiers had more individual freedoms and were better paid. They had their own automobiles and were interested in education and career programs. Schofield Barracks adapted to its new tenants.

To accommodate the new kind of soldier and his family, the Capehart Housing Act allowed for the construction of 1,600 housing units from 1955 to 1962 on old training areas along the road to Kolekole Pass. Older buildings were demolished to make way for parking lots. Schools were built on the post: Hale Kula in 1959 and Solomon Elementary in 1969. A new commissary, post exchange and NCO club were constructed.

Today, the Schofield Barracks area includes Wheeler Army Airfield and Helemano Military Reservation and consists of more than 16,000 acres. The 25th Infantry Division and the many other important units are housed here.

On Feb. 6, 1922, a detachment of 20 enlisted men from Luke Field proceeded to Schofield Barracks, under Lt. William Agee, to clear the flying field and construct housing for the divisional air service. Two canvas hangars were erected, and the field was cleared of weeds, guava and algaroba trees. Thus, Wheeler Field got its modest start.

In June 1923, 13 months after the designation of the new flying field, shop hangars, airplane hangars and oil storage tanks were erected. In 1927, one of the wooden shop hangars was remodeled to provide space for a barracks and a mess hall. Permanent construction was not started until 1930.

Wheeler was the site of several major historic aviation events, including the first nonstop mainland-to-Hawaii flight by Army Air Corps Lts. Lester J. Maitland and Albert F. Hegenberger in 1927; the Great Dole Derby air race from California to Hawaii, also in 1927; the first trans-Pacific flight from the U.S. to Australia by Australian squadron leader Charles E. Kingsford-Smith in 1928; and the first Hawaii-to-mainland solo flight in 1935 by Amelia Earhart, who flew from Wheeler Field to Oakland, California.

When the Japanese attacked military installations in Hawaii on Dec. 7, 1941, 12 pilots assigned to the 15th Pursuit Group at Wheeler (predecessor of the 15th Air Base Wing) succeeded in getting their P-36 and P-40 aircraft off the ground, engaging the enemy in furious dogfights and scoring some of the first American victories of World War II (10 downed enemy aircraft).

Casualties at Wheeler totaled 33 killed and 75 wounded. Of the 233 aircraft assigned to the Hawaiian Air Force, 146 were in commission before the attack; afterward, only 83 were in commission (including 27 P-40s) and 76 had been destroyed.

In August 1987, the Secretary of the Interior designated Wheeler Air Force Base a National Historic Landmark, recognizing it as a site of national significance in the history of the United States and, in particular, World War II in the Pacific.

On Nov. 1, 1991, the Army held a simple ceremony to signify its takeover of the base and then changed the sign at the main gate to Wheeler Army Airfield.