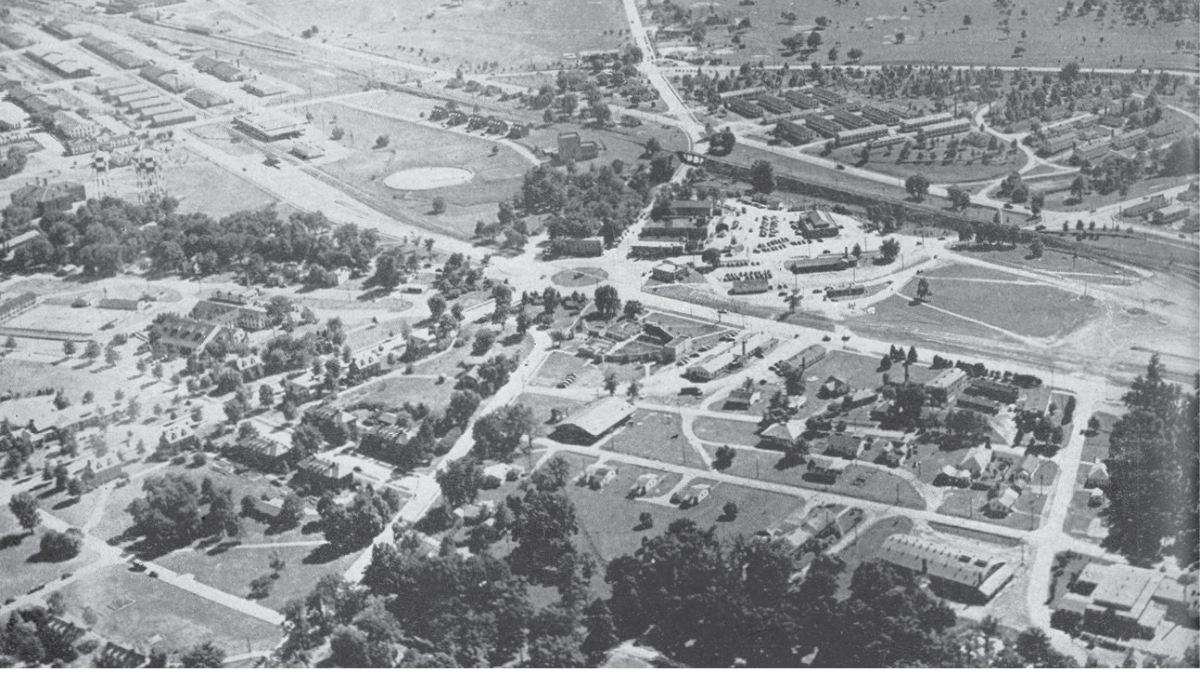 America’s involvement in World War I made it necessary to establish new military installations. In April 1918, the War Department looked to the area of West Point, Kentucky, to establish a permanent artillery camp. According to the Louisville Courier, “The West Point range would become the artillery training center of the Army.”

With the number of troops arriving, it was not long before the Army began looking for additional space. That summer the Army leased 20,000 acres of property in the area of Stithton, Kentucky, a small farming community in Hardin County. Stithton was desired for its close proximity to the railroad and for its higher elevation. Under Maj. W.H. Radcliffe, constructing quartermaster at Camp Knox, construction of buildings began in August 1918. The “tented” camp at West Point would temporarily remain while permanent construction occurred in Stithton.

The land at Stithton was soon acquisitioned by the Army and more land was acquired from Bullitt and Meade counties. Many of the houses in the town of Stithton were used for the Army’s purposes. Modest Victorian architecture once occupied by Stithton residents became homes used by Army officers and their Families.

St. Patrick’s Catholic Church was utilized as a church and for other purposes (today, it is the main post chapel and the oldest building on post). Barracks and warehouses were built to accommodate and support the growing population of Soldiers arriving by train. Standardized plans were used to build most of these World War I mobilization buildings, and identical buildings could be found on most other installations around the country. In this era and locality of the country, horse-drawn equipment was still regularly used along with automobiles.

Reflecting its relationship to artillery, the new post was named in honor of Gen. Henry Knox, chief of artillery in the Revolutionary War and first secretary of war. It was World War I and Camp Henry Knox had come into existence as a permanent post for the U.S. Army.

In September 1918, it was decided to permanently move the artillery camp in West Point to Stithton. The following month the Camp Knox News was founded as the post’s first newspaper. That October, Camp Knox’s Godman Field became the first airfield in Kentucky when it was built for the 29th Aero Squadron.

On Nov. 11, 1918, America celebrated the armistice that ended World War I and construction at Stithton slowed down dramatically. Later that month, the first troops were transferred from West Point. Near the end of December, most of the troops there had been moved to the permanent camp at Stithton, and the maximum number of troops on post reached a high of 9,000.

Troops returning from overseas were brought to Camp Knox to be discharged from the service over the next year. Much of their equipment was turned in and stored in the warehouses that still remain at Fort Knox.

5th Corps Area for Reserve officer training, the National Guard and Citizen’s Military Training Camps. For a brief time, during 1925 to 1928, the area was designated as “Camp Henry Knox National Forest.”