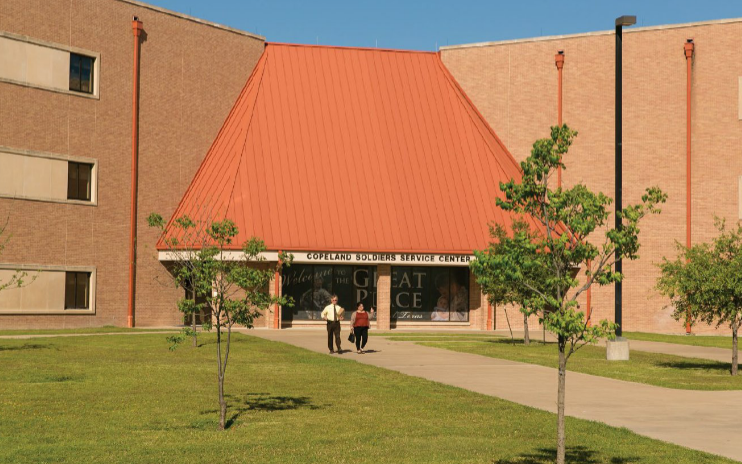 If you arrive at the Killeen-Fort Hood Regional Airport, ground transportation is available to the post. If you need help at the airport, contact the liaison NCO in the baggage claim area.

If arriving by bus at the Killeen Bus Terminal, taxi service is available for a small fare.

Direct phones are in the terminal. Rail service is not available to Killeen. The closest passenger station is in Temple, about 25 miles east. Taxi and bus service is available for transportation to Fort Hood for a fare.

If you are driving a vehicle without a DOD vehicle registration sticker, you will need to enter Fort Hood through the Beck Main Gate. Temporary passes are available at the Marvin Leath Visitors Center, just before the gate. A state registration document for the vehicle, a valid state driver’s license and proof of insurance are required to drive on the installation. The Marvin Leath Visitors Center is always open.

Copeland is in Building 18010. The telephone number is 254-287-3832 (DSN 737-7486). This office is open 24/7. After coming through the Beck Main Gate, continue north on T.J. Mills Boulevard through four traffic lights. The Copeland Soldiers Service Center will be immediately on your left.

Soldiers wear ACU or other authorized uniform while in-processing. After duty hours, you may report in civilian clothing.

The III Corps Headquarters is on Fort Hood. Corps elements are stationed at forts Hood, Riley, Carson and other posts. The corps has joint and expeditionary capabilities, prepared for full spectrum operations in support of joint, combined and interagency missions.

With more than 20,000 Soldiers, the 1st Cavalry Division is the premier heavy-armored division in today’s Army. It is organized in brigade combat teams, composed of maneuver elements, artillery and support. The division also has an air cavalry brigade, horse cavalry detachment and division band.

The command’s mission is to provide combat support and combat service support to units of III Corps in the areas of supply, maintenance, transportation, field services and medical.

Composed of six squadrons and about 500 Airmen, its mission is to integrate aerospace power with the Army’s fire and maneuver on the battlefield. The group advises Army commanders on Air Force air and space power employment, provides tactical air control parties for control of close air support assets and provides staff weather support to the Corps. In addition, the 3rd Weather Squadron operates a 24-hour weather forecasting service at West Fort Hood.

The 3rd Cavalry Regiment, known as the “Brave Rifles,” is a combined arms unit composed of three cavalry squadrons, an aviation squadron and a support squadron.

This brigade consists of about 3,000 CBRNE Soldiers in five battalions spread across nine military installations.

The unit has Avenger and Stinger missiles and Patriot batteries. The unit is composed of 2-1 ADA, 4-5 ADA and 1-44th ADA.

The brigade consists of several MP battalions (including the Fort Hood-based 720th MP Bn and the 178th and 126th MP detachments), which deploy to provide military police combat support, area security, internment and resettlement operations, law and order and police intelligence. When not deployed, the brigade provides law enforcement and force protection to Fort Hood.

The brigade provides a single Army Material Command interface to the field by integrating and synchronizing acquisition, logistics and technology to ensure the combat readiness of Army units west of the Mississippi River.

Fort Hood’s garrison provides support to Soldiers and Families through services and facilities while optimizing resources, sustaining the environment and enhancing the well-being of the Fort Hood community. The garrison is composed of directorates such as Family and Morale, Welfare and Recreation; Emergency Services; Public Works and others.

This command helps spearhead the testing of future Army equipment.

The Warrior Transition Brigade provides command and control, primary care and case management for warriors who have suffered injury or illness while serving as a member of the U.S. Army.

The 47th EOD provides technical assistance to civilian and federal authorities on disposal, transportation and storage of hazardous non-DOD chemicals and/or explosives. The 47th EOD remains responsive 24/7 for any incident involving explosives. When dealing with explosive items, be safe, not sorry.

The U.S. Army Criminal Investigation Command (USACIDC), commonly known as CID, 11th Military Police Battalion (CID) Headquarters is in Building 2201, and the Fort Hood Resident Agency is in Building 2200 (both are on Support Avenue). The RA may be contacted at 254-287-2722. A CID duty agent is available 24/7 and may be contacted through the Military Police Desk Sergeant during nonduty hours.

The NEC is responsible for the installation’s information management, network communication and computer systems. NEC is a part of the 106th Signal Brigade, 7th Signal Command.