The primary trade center for the region, Albany is defined by the free-flowing rapids of the Flint River, named such by Creek Indians for its rich mineral flint or quartz naturally found there and used to make weapons and tools. The centerpiece of redevelopment in downtown Albany, the river serves as a natural backdrop to the Flint RiverQuarium, a 175,000-gallon, 22-foot deep Blue Hole aquarium that opened in 2004 highlighting the journey of the river and the natural ecosystems of the Apalachicola, Chattahoochee and Flint River basins. 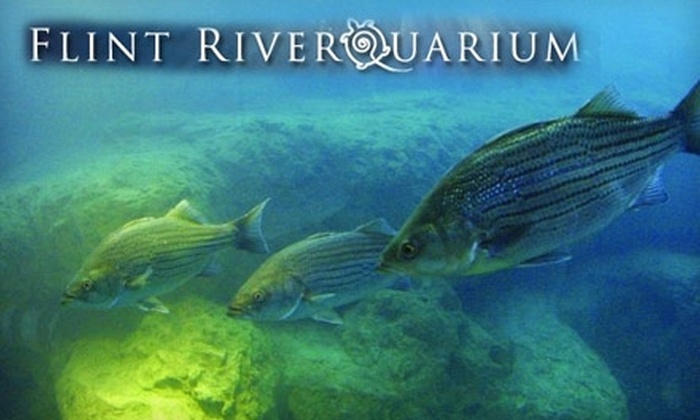 Albany boasts several quality-of-life amenities within walking distance of the aquarium, including Riverfront Park, Turtle Grove Play Park, the Thronateeska Heritage Center, Wetherbee Planetarium and the Albany Civil Rights Institute. Families and visitors with a passion for wildlife can visit the only AZA-accredited zoo outside of Atlanta – Chehaw Animal Park, featuring Creekside Education Center, Children’s Play Park and a nationally sanctioned BMX bike track. Albany also has the region’s only permanent installation of traditional African art as well as exhibitions of American Impressionism at the Albany Museum of Art.

Whatever your heart desires,
we have it –
right here in Albany, Georgia! 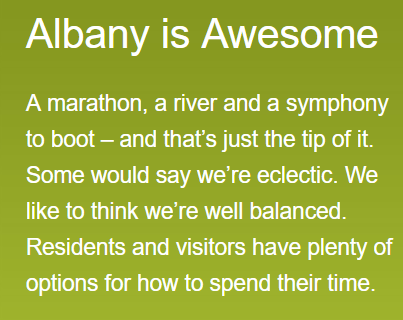 Albany is the hub of Southwest Georgia for shopping, cultural activities and
education as well as the primary trade center for the region. We are fortunate
to be home to some of the finest healthcare that covers virtually every
medical specialty that one would expect in a metropolitan area. 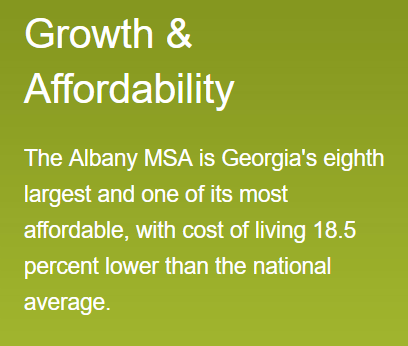 Albany is home to one the finest major medical institutions, Phoebe Putney Memorial Hospital. With more than 650 beds and more than 250 physicians, Albany’s health care covers virtually every medical specialty. All the medical high-tech services that one would expect in a large metropolitan area are available in our community.

Albany has also developed a diversified industrial economy including companies
such as Procter & Gamble, M&M Mars, Coats & Clark, Tara Foods and Pfizer.
Albany is also home to locally grown industry, such as Sasco and Equinox
that are making a name for themselves worldwide. 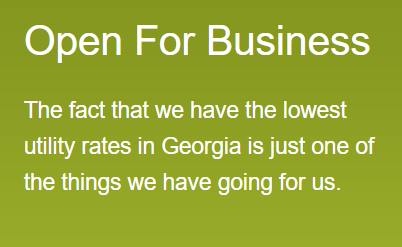 From pre-school to a masters degree …all can be found in Albany.
The Dougherty County Public School System and our private schools
are working to make sure our younger population is prepared to enter
college and/or the workforce. Students have a variety of higher educational
choices after high school, including: 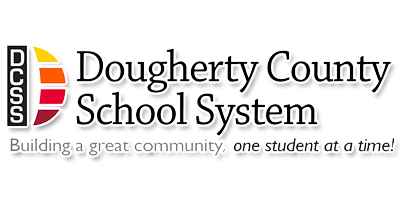 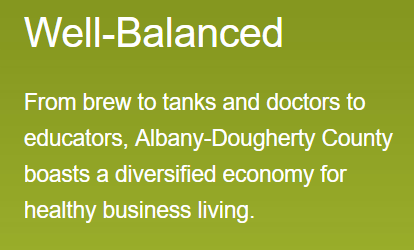 The Marine Corps Logistics Base Albany (MCLB) is a shining star within the Department of Defense and has established itself as a leader in the adoption of private sector business strategies to accomplish its mission. MCLB is considered one of the most important facilities in the nation, employing more than 2,500 civilians along with 500 marines. Commissioned in March 1952, the base sits on more than 3,300 acres in the heart of Albany.

Marine Corps Logistics Base Albany is also committed to providing its service members, civilian-Marines and families a safe and secure environment to work and live, thereby increasing quality of life for all. The base is environmentally conscious and looks for ways to decrease use of non-renewable energy sources to increase security and reduce cost. The base reaches out to the surrounding community to find ways to share common goals and values,
and builds relationships that are good for the Corps and the community,
which will last far into the future.

As if being the home of one of the Marine Corps’ most integral bases isn’t enough, Albany-Dougherty County’s defense sector is further strengthened by the presence of some of the world’s best-known contractors, including Lockheed Martin, Raytheon, General Dynamics and BAE Systems, the latter of which is the world’s second-largest defense contractor by revenue. Aboard the base is Production Plant Albany, a DOD-award winning depot which resets much of the equipment used in the field by the warfighter, and Headquarters Marine Corps Logistics Command, which provides worldwide, operational logistics solutions for fielded weapons systems and support services and supplies.

MCLB is considered one of the most important facilities in the nation,
employing more than 2,500 civilians along with 500 marines.
MCLB Albany is the largest employer in Albany-Dougherty County.

About The Albany Area
Chamber of Commerce

The Albany Area Chamber of Commerce serves as a unifying organization
in our community. The Chamber is composed of private individuals,
businesses and organizations interested in the
community and its economic well-being. 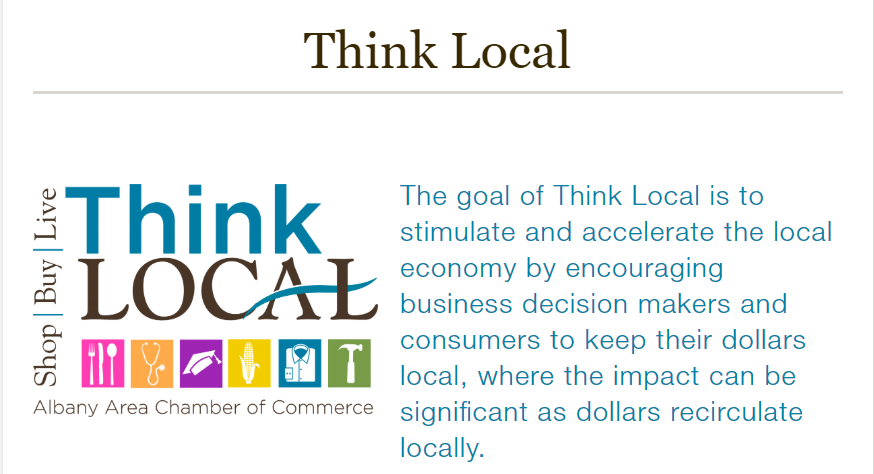 Make the commitment to “Think Local”
by becoming a participant or sponsor.

The Albany Area Chamber of Commerce is proud to support the Marine Corps Logistics Base (MCLB) through the Military Affairs Committee. Our base and others located throughout the state serve as both pillars of our national security and vital components of our economy.

The Albany Area Chamber of Commerce Military Affairs Mission Statement: Serves to support military communities and their significant contributions to Georgia’s economy – past, present and future.