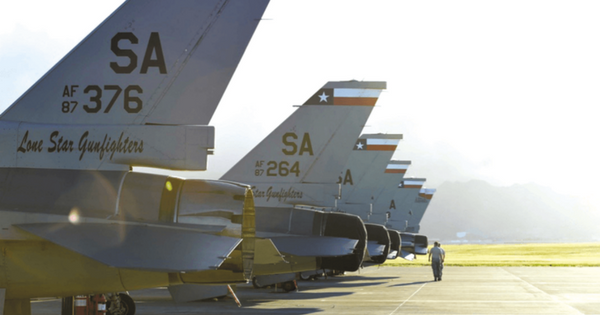 Originally known as the San Antonio Aviation Cadet Center, Lackland Air Force Base was created from a portion of Kelly Field in 1942. It was named for Brig. Gen. Frank Lackland. As a consequence of the Korean War, training populations at Lackland soared. Temporary facilities, including the “I” dormitories, were hastily erected as a quick fix to house the new recruits. During Vietnam, resourceful leaders split training shifts, increased flight sizes and compressed training from 30 to 24 days to satisfy the urgency for military readiness. Training requirements also grew to include teaching English to allied military members from foreign countries. Today, the base continues to prepare new airmen with the knowledge and skills they need to go on as successful, contributing military specialists.

The nation’s mobilization after the December 1941 attack on Pearl Harbor swamped U.S. military installations with inductees. The next summer, the War Department took the advice of its Brig. Gen. Frank Lackland and peeled off Kelly Field’s west side for what became the San Antonio Aviation Cadet Center. Lackland had believed, correctly, it turns out, that consistent aircrew training in one spot would produce higher-quality aircrew graduates faster.

The military already had a cadet training center on Kelly’s Security Hill, and with the U.S. suddenly in a shooting war, the Air Corps replacement training center there became a processing and preflight school for thousands of cadets. Kelly Field’s mission, though, was to meet the nation’s urgent demand for bomber pilots, and the numbers and needs of so many green cadets next door tested that mission. In June 1942, the adjutant general separated Security Hill from Kelly Field and made it an independent Army military installation, the San Antonio Aviation Cadet Center.

The Gulf Coast Army Air Forces Training Center shifted its classification center, preflight school, station hospital, several other units and even an Army Air Force band to the new center, which activated on Independence Day 1942. Ultimately, 90,000 candidates for flight training passed through the preflight school; early on they mostly lived in tents because there hadn’t been time to build accommodations.

Missions for the San Antonio Aviation Cadet Center were adjusted or added throughout WWII. As the war ended in 1945, the center began taking in returning U.S. overseas fighters and either reassigning or separating them from service. In early 1946, the Army decided to use the center for all its Army Air Force basic training and for its officer candidate school as well, which was transferred from Maxwell Field in Montgomery, Alabama. In 1993, that school, by then known as Officer Training School, was returned to Maxwell Field.

Numerous designation tweaks over the years had reflected the facility’s changing uses, but on July 11, 1947, the War Department named it for Brig. Gen. Lackland, whose vision created it. Two months later, President Harry Truman signed the National Security Act to make the U.S. Air Force, formerly part of the Army, an independent service equal to the Army and U.S. Navy; thus Lackland Air Force Base got its final christening.

The U.S. Air Force Marksmanship Center arrived in 1958, as did the Sentry Dog Handler School, now the U.S. Military Working Dogs Training School, which trains drug- and bomb-detection dogs, patrol dogs, dogs skilled at finding land mines, specialized search dogs and dogs that protect visiting dignitaries. Breeds favored for their intelligence, temperament and athleticism are the German shepherd, Dutch shepherd and Belgian Malinois, and after their careers (usually 10 to 12 years) most are adopted as pets.

Lackland’s parent and neighbor, Kelly Air Force Base, closed in 2001. Lackland, along with the city of San Antonio, inherited the 2-mile-long runway between them as a joint-use facility — Kelly Field — which supports flying operations for the Air Force Reserve’s 433rd Airlift Wing and the Air National Guard’s 149th Fighter Wing. The civilian side of the former Kelly AFB is now known as Port San Antonio and run by the Greater Kelly Development Authority, a state entity. It is occupied by more than 70 tenants in the fields of professional services, transportation, warehousing and aerospace, among them defense contractors Boeing and Lockheed Martin, though the Air Force has leased back 200 acres for Air Force agencies.

The National Security Agency uses the Texas Cryptologic Center at Lackland’s Medina Annex as a satellite campus. The NSA also set up a data-mining complex at a former San Antonio Sony microchip plant; both are intended to identify and quash threats to national security, and most information about either is classified.

Lackland’s heritage is celebrated by dozens of historic aircraft like the B-17 Flying Fortress and the P-82 Twin Mustang on display around the base, and visitors and military personnel alike will enjoy the Airman Heritage Museum and Enlisted Character Development Center.

For more than seven decades, Lackland has responded to the nation’s changing needs, but its primary responsibility has remained preparing new airmen with the knowledge and skills they need to go on as successful, contributing military specialists.