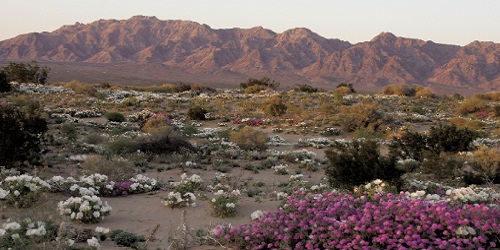 The largest county in the continental United States, San Bernardino covers more than 20,000 square miles of California. While its deserts and mountainous terrain are thinly populated, it boasts a population of more than 2 million people. The cities of San Bernardino county include Barstow, Joshua Tree, Twentynine Palms and Yucca Valley. San Bernardino is the county seat.

San Bernardino is part of the Inland Empire and is in southeast California. Bordering both Nevada and Arizona, it is one of only two counties in California that border more than one U.S. state. The majority of county’s residents live south of the San Bernardino Mountains. Another 300,000 residents live just north of the mountains in Victorville, with the remaining 100,000 scattered across the county.

San Bernardino offers a relaxed desert lifestyle along with plenty of history, culture and modern amenities. In addition to miles of arid desert, the county is home to the snow-capped mountains of Big Bear City, the waterfalls of Forest Falls and the wooded expanse of the San Bernardino National Forest. There are also a number of historical sites and museums, including the Cucamonga Rancho Winery and the San Bernardino History and Railroad Museum. A multitude of annual festivals, theater events and authentic Mexican food offer residents a taste of California charm.

Paleo-Indian sites dating from about 10,000 B.C. show that San Bernardino County has been inhabited for at least 12,000 years. In the past 300,000 years Native American tribes flourished in the area: the Gabrielenos in the West Valley; the Serranos in the foothills of the San Bernardino Mountains; the Vanyumes along the Mojave River; and the Mojave along the Colorado River.

On May 20, 1810, Franciscan missionary Francisco Dumatz led his exploring company into the valley. In honor of St. Bernardine of Siena’s feast day, Dumatz named the valley San Bernardino.

California was admitted to the United States in 1850. In 1853, San Bernardino was created from portions of Los Angeles, San Diego and Mariposa counties.

In the 1870s, prospectors in search of gold favored the Oasis of Mara as a camping spot. Legend says Twentynine Palms was named for the 29 palm trees that surrounded the oasis that offered a reprieve and water for venturing prospectors.

Twentynine Palms was incorporated into San Bernardino County in 1987.

The climate in San Bernardino varies throughout the region, as it covers such a large area. While the San Bernardino Valley is temperate, Twentynine Palms is a hot, desert climate. Temperatures can reach above 100 degrees in the summer months, while winters are mild with an average low of 41 degrees in January. The average rainfall is a scant 4.5 inches annually.

Sun Exposure
Some exposure to sunlight is good, even healthy, but too much can be dangerous. Broadspectrum ultraviolet (UV) radiation, listed as a known carcinogen by the National Institute of Environmental Health Science, can cause blistering sunburns, as well as long-term problems like skin cancer, cataracts and immune suppression. Overexposure also causes wrinkling and premature aging of the skin.

Cloud cover — which is sparse in Twentynine Palms — reduces UV levels but not completely. Depending on the thickness of the cloud cover, you can still burn on a cold and dim day. So be prepared with sunglasses, sunscreen, long-sleeved garments, wide-brimmed hats and an umbrella.

Heat Exposure
Because of Twentynine Palms and San Bernardino County’s high temperatures, it is important to take precautions to avoid heat exhaustion and heat stroke. Stay indoors when temperatures are extreme. Drink cool liquids often, particularly water, even if you do not feel thirsty. Avoid alcoholic beverages, as they dehydrate the body.

Eat small, frequent meals and avoid foods high in protein, as they increase metabolic heat. If you must venture outdoors, avoid going

Flash Flooding
While Twentynine Palms enjoys rare precipitation, a single thunderstorm can deliver threequarters of the annual rainfall. Generally, areas like Twentynine Palms do not have storm drains, culverts and other water-diverting infrastructure. Desert sand is poorly absorbent and dry channels, ditches and lake beds fill quickly. This can lead to flash-flood conditions.

If you are outdoors during a rainstorm, seek higher ground. Avoid walking through any floodwaters — even water six inches deep can sweep you off your feet. If you are driving, avoid flooded areas. The majority of deaths in a flash flood occur when people drive through flooded areas. Roads concealed by water may not be intact. Water only a foot deep can displace a vehicle. If your vehicle stalls, leave it immediately and seek higher ground.

Rapidly rising water can engulf a vehicle and sweep it away.

During a flash flood watch or warning, stay tuned to local radio or TV stations or a National Oceanographic and Atmospheric Administration (NOAA) Weather Radio for further weather information.

Earthquakes
Southern California has thousands of earthquakes every year. Fortunately, most do not cause damage or are even felt. However, it is important to be prepared for an earthquake. Identify potential hazards in your home. Secure top-heavy furniture to a wall. Use earthquake putty on hanging pictures and mirrors. Secure objects on shelves that could become projectiles during an earthquake.

In the case of an earthquake, remember: drop, cover and hold on. If you are not near a table or desk, drop to the floor against an interior wall and protect your head and neck with your arms. Avoid exterior walls, windows, hanging objects, mirrors and other objects that could fall. For more information on earthquake preparedness, visit www.earthquakecountry.info.