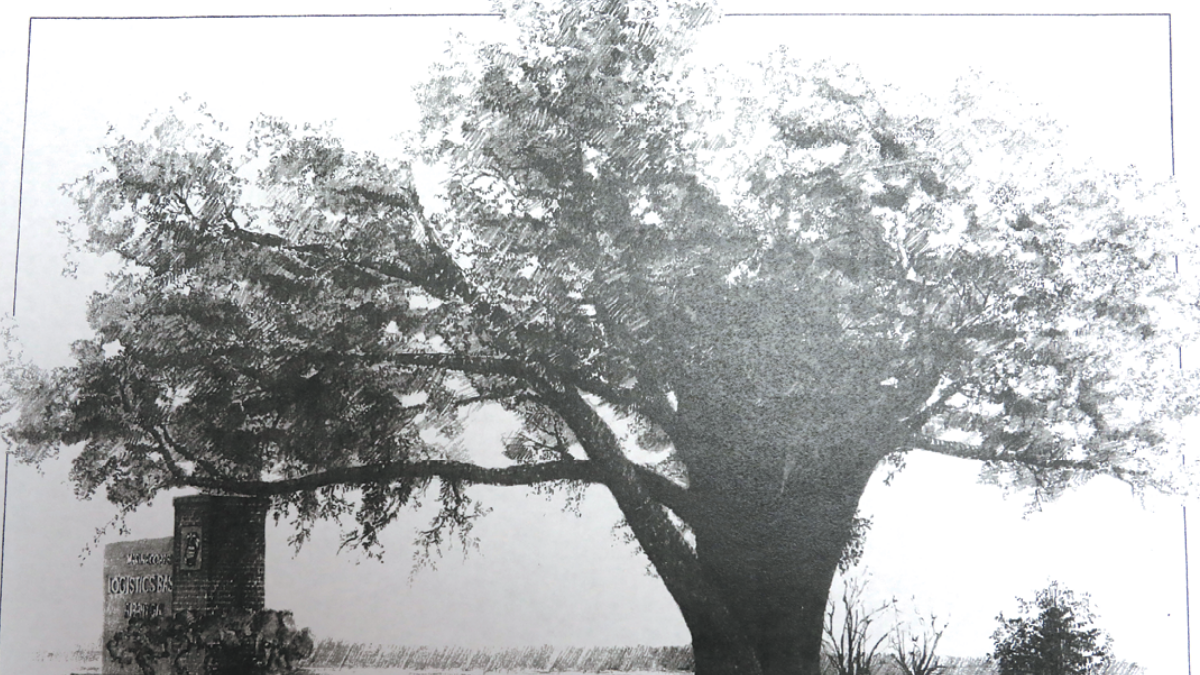 Native American artifacts, more than 200 to date, have been unearthed here. The artifacts indicate that a Native American hunting camp once stood on the high ground at the east end of Marine Corps Logistics Base Albany.

University of Georgia archeologists believe the flint knives, scrapers, drills, agricultural tools, arrowheads and spearheads found here date back some 8,000 to 10,000 years. These items are evidence that Native Americans also used the site where MCLB Albany is as a center of resupply or a supply base.

Of special interest was a piece of black flint found at the site. Black flint comes from North Georgia, so it is thought that South Georgia Native Americans, through early trade, made this an early example of commerce in the Southeast.

A large oak tree is also a historical landmark here. It was named after Col. A.E. Dubber, who from March 1951 to July 1955, was in charge of planning and construction of the Marine Corps Depot of Supplies, Albany, Georgia. He was insistent that the construction of the depot be aligned on this oak tree and during the depot’s construction, the tree was affectionately known as “Dubber’s Oak.”

Brig. Gen. Raymond P. Coffman assumed command and a small contingent of Marines established headquarters in temporary buildings when the base was commissioned on March 1, 1952, as the Marine Corps Depot of Supplies. The depot’s name changed two more times before it became Marine Corps Logistics Base Albany on Nov. 1, 1978.

MCLB Albany enjoys being a part of the Albany community as well as its rich history, tradition, transitional periods, economic change, prosperity and growth. The installation, along with its tenant commands, serves a great purpose here as well as within our Corps across the world. The base has a $1.6 billion economic impact to the Southwest Georgia area, and we are the largest employer with more than 5,000 total employees (active duty, civilians and contractors). The support the base receives from the Albany community and the Southwest Georgia region is second to none. As Marines, we are stationed at and deployed to every clime and place throughout the world. The partnerships and relationships that we have developed with this community bonds us for years to come.

An integrated workforce of military and civilian men and women accomplish the base’s mission of supporting its organizations that help sustain Marines around the world.

In a landmark ceremony Sept. 23, 2011, base and local officials flipped the switch on a $20 million generator plant designed to produce renewable electric power and steam by burning landfill gas collected from a nearby landfill. MCLB Albany; Dougherty County, Georgia; and Chevron Energy Solutions officials inked the Department of the Navy’s first landfill gas-to-energy partnership in December 2009. The green technology recovers methane gas from the neighboring landfill and converts it into energy and steam.

The work done at Production Plant Albany and throughout the base directly and positively contributes to the safety and security of our service members, community members and the nation as a whole. Those efforts support and defend our war fighters — those defending our individual freedoms abroad — and without those freedoms, our way of life would be forever changed.

The base was recognized May 5, 2015, by the Occupational Safety and Health Administration for superior excellence in health and worker safety and awarded the Voluntary Protection Program (VPP) Star Status, designating the base as a Star site within the Department of Defense. VPP Star worksite designation is OSHA’s highest honor and recognizes worksites that are committed to safety excellence and protecting their employees beyond the requirements of OSHA standards. The average VPP site has a work-related injury rate at 52 percent below the national average for their respective industries.