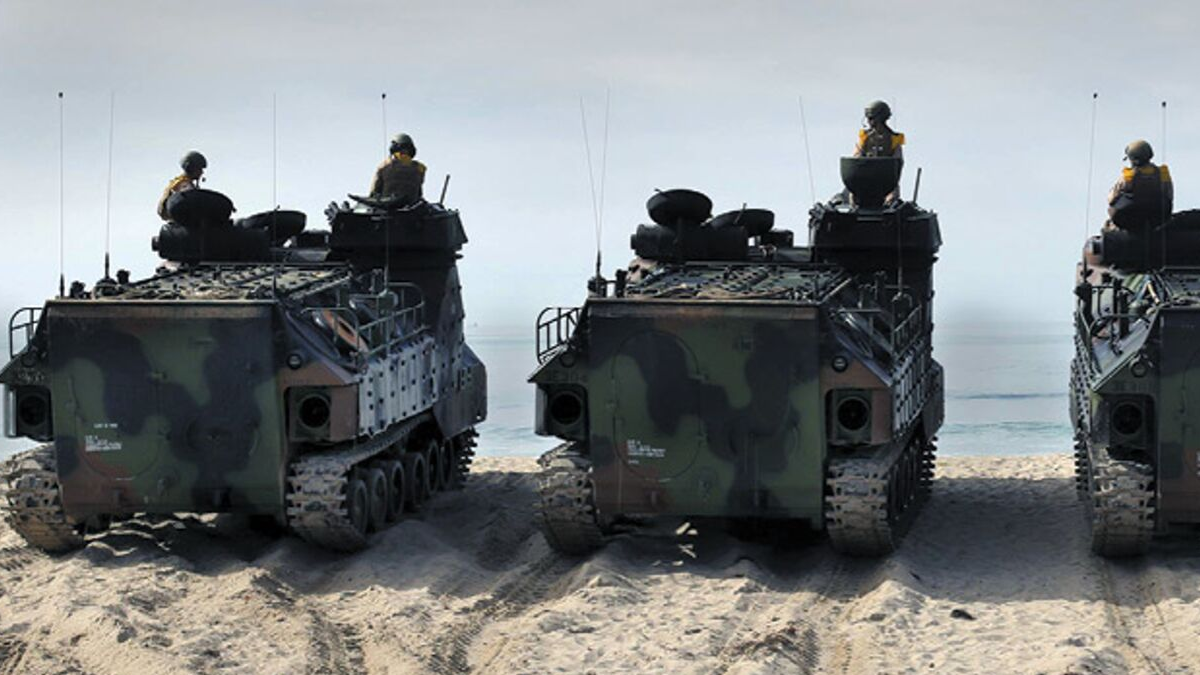 The 1st Marine Division was activated aboard the battleship USS Texas on Feb. 1, 1941. It is the oldest and most decorated division-sized unit in the United States Marine Corps. Divisional regiments were in existence as early as March 8, 1911, when the 1st Marine Regiment was formed at Guantanamo Bay, Cuba. It saw action in Haiti in 1915, in the Dominican Republic in 1916 and throughout the Caribbean during World War I.

The 5th Marine Regiment was created at Vera Cruz, Mexico, on July 13, 1914. It served in Santo Domingo in 1925 and participated in 15 major engagements during World War I. These included Belleau Wood, Chateau Theory and Chiercy Mihiel. On Aug. 11, 1917, 7th Marines was activated in Philadelphia. It spent the duration of World War I in Cuba and was disbanded after the war. It was reactivated in 1941.

The 11th Marine Regiment was formed in January 1918 at Quantico, Virginia, as a light artillery regiment. The regiment went to France as an infantry unit, providing a machine gun company and a guard company. Decommissioned and reactivated twice between world wars, the regiment again served as an infantry unit in Nicaragua. Re-formed in 1940 as a full-fledged artillery unit, 11th Marines joined 1st Marine Division.

“The Old Breed” was the unit chosen to land at Inchon, Korea, on Sept. 15, 1950, adding another PUC to its list of decorations. A fifth PUC was for the division’s “Attack in the opposite direction,” fighting its way out of the Chosin Reservoir against Communist Chinese divisions. The Chinese suffered an estimated 37,500 casualties trying to stop the Marines’ march out of the “Frozen Chosin.” Battles between April and September earned the division its sixth PUC.

The 2nd Battalion, 1st Marines returned to Guantanamo Bay for two months in 1962 during the Cuban missile crisis. More than 11,000 Marines of the 5th Marine Expeditionary Brigade participated in the naval blockade, which forced the withdrawal of the missiles from Cuba.

Less than three years later, the division was again on the move. In 1965, 7th Marines participated in operations Starlight and Piranha, the first major engagements for American ground troops in South Vietnam. March 1966 saw 1st Marine Division Headquarters established at Chu Lai. By June, the entire division was in South Vietnam. Its zone of operation included the southern two provinces of I Corps — Quang Tin and Quang Ngai. Between March and October 1966 to May 1967, the division conducted 44 named operations. Major engagements included operations Hastings and Union I and II. In these operations, 1st Marine Division units decisively defeated the enemy.

During the 1968 Tet Offensive, the division was involved in fierce fighting with both Viet Cong and North Vietnamese army elements. It was successful in beating back enemy assaults in its operation areas.

After six hard years of combat, 1st Marine Division returned home to Camp Pendleton in 1971, closing another chapter of dedicated service to Corps and country.

In 1975, the division supported the evacuation of Saigon by providing food and temporary shelter at Camp Pendleton for Vietnamese refugees as they arrived in the United States.

In 1990, 1st Marine Division formed the nucleus of the massive force sent to Southwest Asia in response to Iraq’s invasion of Kuwait. During Operation Desert Shield, the division supported the I MEF in the defense of Saudi Arabia from the Iraqi threat. In 1991, the division went on the offensive with the rest of Coalition Forces in Operation Desert Storm. In 100 hours of ground offensive combat, 1st Marine Division helped to liberate Kuwait, smashing the Iraqi army in the process.

Immediately following the Persian Gulf conflict, the division sent units to assist in relief efforts following a typhoon in Bangladesh (Operation Sea Angel) and a volcanic eruption in the Philippines (Operation Fiery Vigil). In December 1992, Operation Restore Hope, bringing relief to famine-stricken Somalia, kicked off with the early morning amphibious landing of Marines from the Camp Pendleton-based 15th Marine Expeditionary Unit, which was supported by Battalion Landing Team, 2nd Battalion, 9th Marines. More than 15,000 metric tons of food was successfully distributed from 398 food sites in the city during the operation. The final phase of the operation involved the transition from a U.S. peacemaking force to a United Nations peacekeeping force. U.S. Marine involvement in Operation Restore Hope officially ended April 27, 1993, when the humanitarian relief sector of Mogadishu was handed over to Pakistani forces.

The 1st Marine Division participated in Operation Enduring Freedom after the attacks of Sept. 11, 2001. In March 2003, the Marines brought freedom to the oppressed people of Iraq during Operation Iraqi Freedom. The division was the tip of the spear during the combat phase of the operations.

Today, the 1st Marine Division is a multirole, expeditionary ground combat force. The division is employed as the ground combat element of I MEF or may provide task-organized forces for assault operations and such operations as may be directed. The 1st Marine Division must be able to provide the ground amphibious forcible entry capability to the naval expeditionary force (NEF) and to conduct subsequent land operations in any operational environment. The 1st Marine Division is currently composed of 1st, 5th, 7th and 11th Marines; Headquarters Battalion; 3rd Assault Amphibian Battalion; 1st and 3rd Light Armored Reconnaissance battalions; 1st Combat Engineer Battalion; 1st Tank Battalion; and 1st Reconnaissance Battalion. These units represent a combat-ready force of more than 19,000 men and women.

The 1st, 5th and 7th Marines each consist of one headquarters company and four infantry battalions, with one battalion deployed outside the continental United States at all times. The infantry battalions are the basic tactical units that the regiment uses to accomplish its mission of locating, closing with and destroying the enemy by fire and close combat. The 1st and 5th regiments are in the 53 and 62 areas, respectively. The 7th Marines are in Twentynine Palms, California.

The 11th Marine Regiment consists of a headquarters battery and four artillery battalions. The 11th Marines is the primary source of fire support for the 1st Marine Division in amphibious assault and subsequent operations ashore. It provides direct and general fire support to frontline units as required by the infantry commanders. The 11th Marine Regiment organic weapon is the 155 mm howitzer (M777 towed howitzers). The Las Pulgas (43) Area is home to the 11th Marines, 1/11 and 2/11. The Las Flores (41) Area is home to 5/11 and 3/11 is at Twentynine Palms.

The 1st Tank Battalion was activated Nov. 1, 1941, and is at Twentynine Palms. Its mission is to provide combat power to 1st Marine Division in the form of amphibious and Maritime Preposition Forces and to conduct operations ashore utilizing the enemy.

As a separate battalion, 1st Tank Battalion is responsible for providing armored assets as well as anti-armor systems and staff expertise in their employment. The 1st Tank Battalion is equipped with the M1A2 Abrams Battle Tank. The 1st Combat Engineer Battalion performs many specific functions, while fulfilling its mission of providing both tactical and logistical engineer support to 1st Marine Division. The battalion shares the San Mateo (62) Area with 5th Marines.

The division has two light armored reconnaissance battalions. The mission of an LAR battalion is to conduct reconnaissance, security and economy of force operations and within its capabilities, limited offensive or delaying operations that exploit the unit’s mobility and firepower. The 1st LAR Battalion was activated May 31, 1985, and is at the Las Flores (41) Area. The 3rd LAR Battalion was activated Sept. 11, 1986, and is at Twentynine Palms.

The division reactivated the 1st Reconnaissance Battalion on June 8, 2000, but the battalion was originally activated March 1, 1937. It now calls the Margarita (33) Area home. Before 1944, Marine Recon was primarily composed of scout/sniper units. In April 1944, a two-company amphibious reconnaissance battalion was formed with the mission of conducting beach reconnaissance and hydrographic survey. Today, the battalion performs a wide variety of tactical and special operations in support of the division.