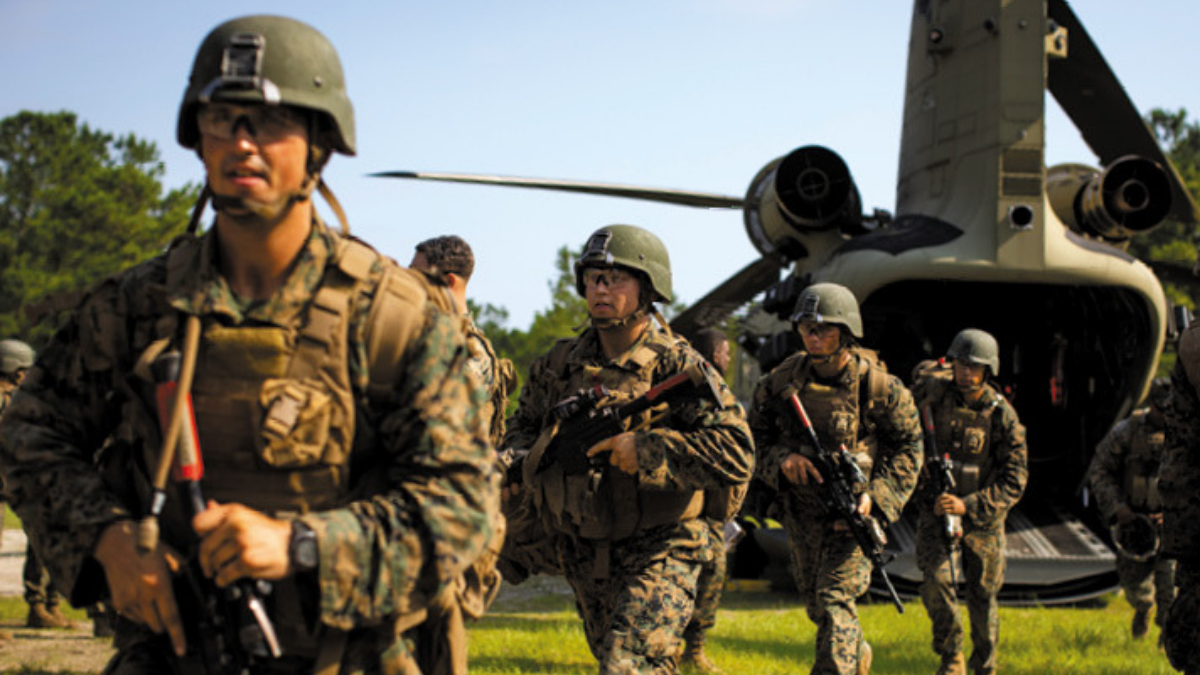 Camp Lejeune and Onslow County have come a long way since September 1941, when the 1st Marine Division set up camp in the middle of a sandy pine forest along the Atlantic Seaboard. A tobacco barn, farm house and temporary tent cities have been transformed into what is now a 156,000-acre premier military training facility, and the strengthening bonds among its Marines, Sailors, Coast Guardsmen, family members, military retirees and civilians are helping Onslow County grow at unprecedented rates.

The Camp Lejeune story actually began in 1940. World War II had been raging in Europe for more than a year, and military planners were posturing forces for America’s imminent entry. The need for an East Coast amphibious training facility was answered by the Department of the Navy’s purchase of an initial 110,000-acre tract of land. Close to ports at Wilmington and Morehead City, the area that is now Camp Lejeune was a logistical gem. When planners added remote pine forests and miles of beach, the value of Camp Lejeune as a home training base for Marines was unbeatable.

On May 1, 1941, Lt. Col. William P.T. Hill was ordered by the 17th commandant, Lt. Gen. (then Maj. Gen.) Thomas Holcomb, to establish and assume command of the base, then known as Marine Barracks New River, North Carolina. His headquarters were set up in an old farm house at the Tent Camp (now Camp Geiger) but in August 1942 were moved to Building 1 at Hadnot Point, where they remain today.

Near the end of 1942, the base was named Marine Barracks Camp Lejeune in honor of the 13th commandant and commanding general of the 2nd Army Division in World War I, Maj. Gen. John A. Lejeune. In 1944, it was renamed Marine Corps Base Camp Lejeune.

This land’s value to the Marine Corps has grown throughout the years as men and women have trained here to fight wars in the Pacific Islands, Korea, Vietnam, Kuwait, Afghanistan and Iraq. Camp Lejeune has also proven invaluable for the training and deployment of Marines for such actions as peacekeeping in Lebanon, tactical recovery of aircraft and personnel missions, drug interdiction and a host of noncombatant evacuations. The idea of Special Operations Capable Marine Expeditionary Units was born at Camp Lejeune, and in that spirit of innovation Marines here continue to strive to anticipate and meet future demands of warfare by developing skill sets such as urban and vehicle convoy operations, and improvised explosive devices detection and handling, without neglecting longstanding competencies such as amphibious operations, close air support and naval gunfire. Camp Lejeune’s expansive acreage includes vitally important areas, historically and operationally, at Camp Johnson, Camp Geiger, Courthouse Bay, Stone Bay and the Greater Sandy Run Training Area.

Tucked in amid the tall pines of eastern North Carolina, just minutes away from the white sandy beaches of the Atlantic Coast, Marine Corps Air Station New River has had a tremendous impact on the surrounding community and has played a major role in Marine Corps aviation since its beginning in 1944.

Although 1944 is celebrated as New River’s birthday, the Air Station’s roots go farther back. During 1941, the federal government purchased land where MCAS New River and the adjacent base are today for approximately $65,000. The next year, Capt. Barnett Robinson, of Marine Glider Squadron 71, surveyed the area around the New River. His investigation concluded the site would be suitable for land and seaplane operations.

The first squadron, Marine Bombing Squadron 612, arrived during 1943. The light bombers, known as the PBJ, resembled the Army’s B-25 Mitchell bomber. VMB-612 remained here until being deployed to the Pacific during World War II. Shortly after their departure, the Air Station was commissioned as Peterfield Point, named after a farmer whose tobacco field made up most of the land. The separation from Camp Lejeune in 1944 marked the Air Station’s birth.

During 1968, the Air Station changed its name once again to Marine Corps Air Station (Helicopter) New River. The change marked the Air Station’s development from a small training base into a major tactical Marine airfield. The “Helicopter” designation was dropped during 1985.

Today, more than 6,000 Marines and Sailors along with more than 200 civilians operate out of the two Marine Aircraft Groups and support squadrons aboard the 3,616-acre Air Station.