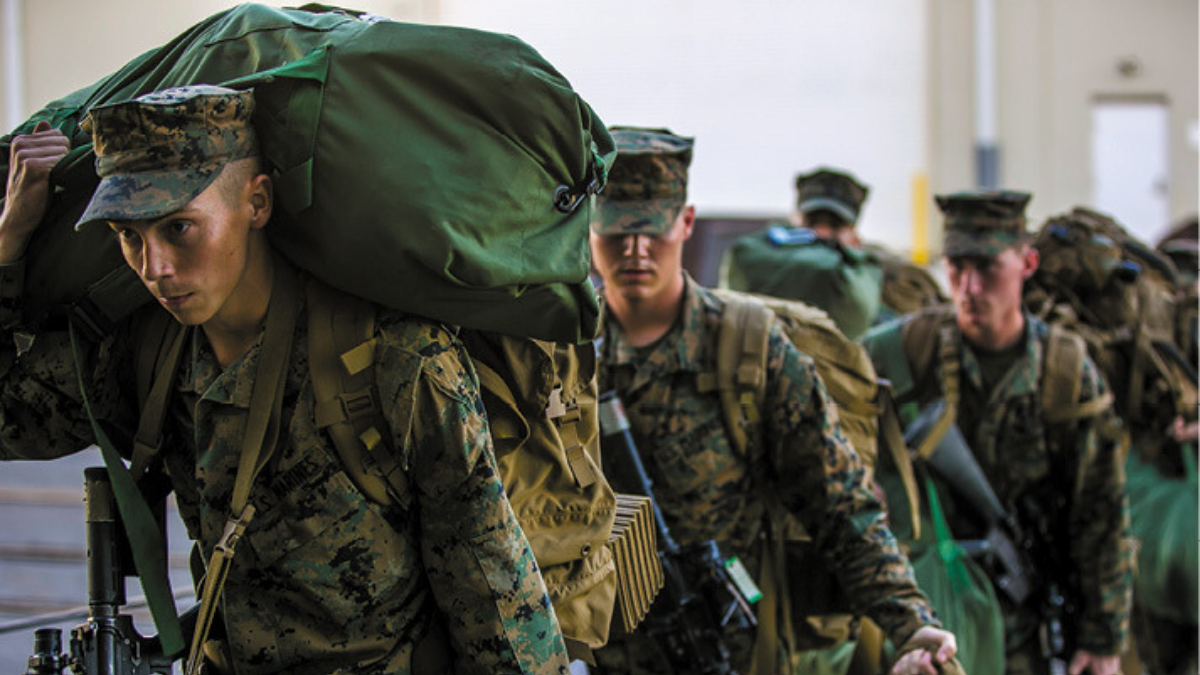 The II Marine Expeditionary Force (II MEF), one of three MEFs in the Marine Corps, is a combined arms force of four elements: command, ground, aviation and logistics. It can carry out offensive combat ashore while sustaining itself without outside help for 60 days.

While II MEF is part of the operational force structure of U.S. Marine Corps Forces Command and engages in operations and exercises throughout the command’s area, it routinely provides operating forces to support other U.S. unified and NATO commands. II MEF is, in fact, available for and prepared to respond to contingency requirements worldwide.

The routinely deployed, forward-presence Marine Air-Ground Task Forces, the 22nd, 24th and 26th Marine Expeditionary Units, deploy on a rotating basis as a geographic combatant commanders’ forces in readiness. A Marine Expeditionary Unit consists of approximately 2,400 Marines and Sailors, can respond rapidly to many different contingencies, and if the situation requires, can act as the forward element of a larger Marine Air-Ground Task Force.

The 2nd Marine Division is a multirole expeditionary ground combat force and the ground combat element of II MEF. The 2nd Marine Division acts a first wave, being the lead amphibious force to land and clearing the way for a following naval expeditionary force before transitioning to sustained land combat operations. The backbone of the division is the individual Marine infantryman, whose basic mission is to locate, close with and destroy the enemy.

The division is made up of more than 15,000 enlisted Marines and Sailors and 1,000 officers who form the 2nd, 6th and 8th Marine regiments (infantry). The division also contains 10th Marine Regiment (artillery), 2nd Tank Battalion, 2nd Reconnaissance Battalion, 2nd Combat Engineer Battalion, Headquarters Battalion, 2nd Assault Amphibian Battalion and 2nd Light Armored Reconnaissance Battalion. This division was born when the 2nd Marine Brigade was activated on July 1, 1936, as part of the Fleet Marine Force. A year later the brigade deployed to Shanghai, China, returning in 1938 to San Diego. On Feb. 1, 1941, the unit was redesignated as the 2nd Marine Division. Its component regiments, the 2nd, 6th, 8th and 10th Marines, brought with them impressive records of service in Veracruz, Mexico, World War I in France and the Caribbean.

In World War II, elements of the division served in Iceland, in Hawaii during the attack on Pearl Harbor and in Samoa. The full division deployed to the Pacific for the Guadalcanal campaign, followed by the bloody assault on Tarawa for which it was awarded a Presidential Unit Citation. The division fought valiantly at Saipan, Tinian and Okinawa, and division units began regular deployments to the Mediterranean as landing forces for the U.S. 6th Fleet. The units also deployed to Korea during the Korean War and the Middle East to evacuate Americans and prevent civil war during times of crisis.

In 1958, elements of the 2nd Marine Division were part of U.S. intervention in the Lebanon crisis. Units of the division helped reinforce Guantanamo Bay during the Cuban missile crisis in 1962, and landed in the Dominican Republic in 1965 as part of Operation Power Pack. The division made up part of the multinational peacekeeping force in Lebanon from August 1982 until February 1984, tragically losing 241 Marines and Sailors during the 1983 Beirut barracks bombing. Toward the end of the 1980s, division Marines participated in Operation Just Cause, the invasion of Panama.

In 2010, elements of the division deployed to Afghanistan aboard amphibious ships to support three Marine Expeditionary Units, or Theater Security Cooperation events, in Africa and South America. A majority of the combat deployments have been on behalf of Marine Expeditionary Brigade-Afghanistan or 1st Marine Division (FWD) across Helmand province. Additionally, separate battalions were deployed either as a whole unit or as part of task-organized elements to Regional Command Southwest.

Most recently the division continues to deploy Afghanistan, partnering with Afghan National Security Forces (ANSF) and the Afghan government; their goal was to conduct counterinsurgency operations to secure the local population, defeat insurgents and enable the ANSF to take over their own nation’s security with an eye to increasing stability, development and self-governance, and to turn the fight over to Afghan control.

The 2nd Marine Division — the “Follow Me” Division — is an integral, vital part of America’s force in readiness.

The nucleus of this community is Headquarters and Headquarters Squadron. H&HS provides the operational and logistical support needed to keep the aircraft flying. From the air traffic controllers in the tower to the cooks working in the dining facility, the headquarters team is a crucial link in the New River chain.

The mission of CNATT Marine Unit New River is to provide the best possible technical training to enlisted personnel in the operation, and maintenance and repair of aeronautical equipment and systems in response to operating forces’ requirements. Additionally, they provide mentorship and professional development of Marines, Sailors and Airmen, preparing them for the challenge of leadership and responsibility. The CNATT Marine Unit New River is composed of a headquarters element, two Maintenance Training Units and a Training Support Branch. The CH-53 MTU and the
V-22 MTU each provide state-of-the-art, computer-based maintenance instruction in conjunction with hands-on aircraft training. In addition to training enlisted technicians, CNATT develops guides and lesson plans, and provides an opportunity for fleet to conduct refresher and specific systems training. The Training Support Branch provides logistics, maintenance, administrative, IT and curriculum development support to each of the MTUs.

MACS-2 is a unique element that helps make deployed combat air power possible. From air traffic control to command and control communications, the Marines of MACS-2 are a professional unit ready to go in a moment’s notice. They aid in the establishment and operation of expeditionary airfields, making it possible to project air power deep into enemy territory. Their radars can sweep the skies to guide aircraft to targets and bring them back to the airfield from which they departed.

The mission of VMX-22 is to provide operational test planning, execution, reporting, support, tactics development and technical expertise for assigned tiltrotor weapons systems, subsystems and related support devices. It operates under the oversight of the chief of naval operations via Commander, Operational Test and Evaluation Force.

In the mid-’80s, the Marine Corps identified the need to update current aviation combat capabilities. This led to the development of new technology and the MV-22 Osprey.

The Osprey continues to replace the aging fleet of CH-46E Sea Knight helicopters. The capabilities of this aircraft include twice the speed, three times the payload and the ability to fly six times farther than the CH-46E helicopters it is replacing.

MAG-26 was activated June 16, 1952, and assigned to MCAS New River in July 1954. The Marines and Sailors of MAG-26 have had a challenging and diverse mission throughout the past 50 years, taking part in contingency and training operations around the globe. Helicopter and tiltrotor squadrons of the group have participated in operations including: Operation Provide Promise in the Adriatic Sea; Operation Provide Comfort in northern Iraq and Turkey; Operation Victor Squared in Guantanamo Bay, Cuba; Operation Deny Flight in the Balkans; Operation Continue Hope in Somalia; Operation Silver Wake in Albania; Operation Allied Force in Kosovo; and Operation Iraqi Freedom and Operation Enduring Freedom.

The beginning of 1995 was met with many firsts for MAG-26. In conjunction with USS O’Bannon (DD-987), HMH-461 was the first fleet squadron to perform a hover in-flight refueling mission while hovering over a naval vessel. HML/A-167 was also the first squadron to use the Night Targeting System on the AH-1W Super Cobra. More recently, MAG-26 provided the first Osprey squadrons to Iraq and Afghanistan. On Jan. 28, 2009, MAG-26 turned over with Marine Aircraft Group 16 and assumed primary command of aviation support in Iraq’s Al Anbar Province. This yearlong deployment for the MAG in support of Operation Iraqi Freedom culminated in November when the 2nd Marine Aircraft Wing headquarters turned over its mission as the aviation combat element of Multi-National Forces West to MAG-26 (Rein). The final elements of MAG-26 returned from successful operations in Iraq in February 2010. Their success across the world demonstrates the versatility and focus on mission that is the hallmark of MAG-26. During 2010, VMM-162 (Rein) returned from operations with the 24th Marine Expeditionary Unit while the first MV-22 squadron, VMM-261, returned from Afghanistan. In the past year, MAG-26 was restructured to include all of the Marine Corps MV-22 Osprey tiltrotor squadrons.

This squadron is the muscle on the ground that can build and sustain airfield operations nearly any place in the world.

From heavy equipment operators to water purification experts, the Marines and Sailors of MWSS-272 are equipped and trained to support a warfighting aviation combat element.

MWSS-272 trains on a day-to-day basis with both Marine Aircraft Groups located aboard New River. They deploy around the world on a regular basis to support exercises and operations. More recently, the MAG’s squadrons have served in Operation Enduring Freedom and Operation Iraqi Freedom.

MAG-29 was activated May 1, 1972, at New River and within 11 days swelled to include three flying squadrons. During their first operational year, they flew more than 23,500 flight hours. From the mid to late 1980’s, MAG-29 supported multiple Marine Amphibious Unit deployments to the Mediterranean and deployments to Norway in support of Exercise Battle Griffin. Throughout 1989 and 1990, MAG-29 participated in numerous exercises and operations, which culminated with all MAG-29 units deployed in support of Operation Desert Shield/Storm and Landing Force, 6th Fleet commitments.

MAG-29 has been a constant part of the II Marine Expeditionary Force’s deployed combat-ready arsenal. From contingency operations through the 1980’s to operations in Southwest Asia, the pilots and crews of MAG-29 squadrons have been on the tip of the spear. As innovators, one of their squadrons was the first to use an AH-1W Super Cobra to mark targets for AV-8B Harriers to drop laser-guided bombs.

Marine Medium Helicopter Squadron 365 supported Operation Enduring Freedom in Afghanistan following the terrorist attacks of Sept. 11, 2001. In January 2003, MAG-29 (Rein) deployed to become the 3rd Rotary Wing Aircraft Group for 3rd Marine Aircraft Wing in support of Operation Iraqi Freedom. During its combat deployment, MAG-29 (Rein) squadrons flew more than 111,000 combat flight hours, and supported the tactical movement of 187,000 passengers and the aerial medical evacuation of 4,500 coalition and Iraqi force personnel. In February 2008, MAG-29 was replaced by MAG-16 and redeployed to MCAS New River. The next year, MAG-29 was also restructured to house all Marine Heavy Helicopter and Light Attack Helicopter squadrons assigned to New River. During 2010, HMH-464 returned from Afghanistan as well as a partial unit attached to the 24th MEU.