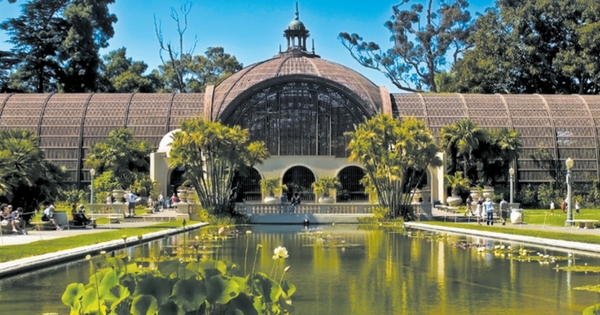 SAN DIEGO OFFERS MANY LEISURE OPPORTUNITIES, FROM ZOOS TO MUSEUMS TO A VARIETY OF OUTDOOR WATER SPORTS.

Besides the many recreational offerings, San Diego is a thriving and prosperous community. It is now the eighth-largest city in the United States, with nearly 1.4 million inhabitants. The following is a small sample of the major attractions around the San Diego area. Additional information and tickets for local attractions can be purchased at the MCCS ITT Office, Building 2524, 858-577-4126/4141.

the 1935-1936 California Pacific International Exposition. Balboa Park is also renowned for the horticultural treasures on its 1,200 acres: brilliant displays of seasonal flowers, many themed gardens including an award-winning rose garden and a Japanese garden, rare and exotic plant species, shady groves of trees and green rolling lawns. Balboa Park also features a classic carousel built in 1910, one of the few in the world which still plays the brass ring game. For information, call 619-239-0512 or visit www.balboapark.org.

There’s a whole new kind of theme park where there’s a better way to play. Hop on the Dragon Coaster for a high-spirited tour of the King’s Castle, take a Safari Trek through Africa or power-ski through water blasts at Aquazone. The new Lego Star Wars Death Star model, made completely out of Lego bricks, is now open in Miniland. Visit the recently opened Lego Friends Heartlake City to ride the carousel

in Mia’s family ranch. Stroll through the Lego horse stables. The resort features more than 60 rides, shows and attractions, and there’s so much to do, you’ll want to spend the night. The Legoland Hotel has 250 Lego-themed rooms along with a play area and a giant pit of Legos in the lobby and it’s steps away from the park entrance. The resort is home to the expanded Legoland Water Park featuring the Lego Legends of Chima Water Park. Next door is the Sea Life Aquarium featuring hands-on learning. Visit www.legoland.com/california for details.

In Old Town San Diego, visitors can see a variety of old-time shops, visit art galleries, eat at ethnic restaurants and see an example of San Diego history. A guided trolley tour combines colorful anecdotes, humorous stories and well-researched historical facts. The self-paced tour can be an all-day experience or a two-hour continuous tour. Tours are given year-round from 9 a.m. to 5 p.m. daily. Tour stops include

The San Diego Zoo is home to 4,000 rare and amazing animals. See giant pandas, Komodo dragons, gorillas, tigers, flamingos, polar bears and many more. The zoo is also an accredited botanical garden featuring more than 6,000 species of exotic plants. As the San Diego Zoo celebrates 100 years in 2016 you too can celebrate with various tours, animal encounters, children’s birthday parties and much more. For more information, call 619-231-1515 or visit http://zoo.sandiegozoo.org.

The park is 25 minutes north of Miramar. The exciting safari experience includes seeing herds of rhinos, giraffes, antelope, zebras and more roaming natural habitats, a choice of guided safari expeditions, and beautiful walking trails to see exotic animals. Admission includes unlimited rides on the Africa Tram and all shows and exhibits but excludes parking and special ticketed events/attractions. To get there, exit off I-15 at Via Rancho Parkway and follow signs 6 miles east. For information, call 760-747-8702 or visit www.sdzsafaripark.org.

SEAPORT VILLAGE AND THE HEADQUARTERS

There’s no place in the world like SeaWorld San Diego. From the moment guests arrive, they are immersed in an undersea world, as they reach in and touch sharks, cleaner fish and other marine life in four state-of-the-art touch pools at Explorer’s Reef. Thrill seekers love Manta, SeaWorld’s double-launch, multimedia coaster that soars, dives and twists like a ray. For a more serene experience, there’s Turtle Reef, a coral reef-themed habitat with dozens of threatened sea turtles swimming in their 280,000-gallon habitat. Guests can take in numerous other shows and attractions, including One Ocean (set to close next year), the visually stunning Shamu show that takes you on a sensational, breathtaking journey of curiosity and wonder; the Penguin Encounter, featuring more than 300 penguins waddling and swimming in their snow-filled, 25-degree habitat; the Shark Encounter, where a moving sidewalk takes guests through a tunnel with sharks swimming all around them; and Wild Arctic, featuring polar bears, beluga whales and walruses.

The scenic San Diego shore offers more than magnificent sunsets and cool breezes. Whether you enjoy riding the waves, sailing the time away or just lying on the beach, San Diego has it all. The waters of Mission Bay, Pacific Beach, Coronado and others are also prime areas for any water sports excitement. WaveRunners, Jet Skis, ski boats, surfboards, motor boats, sailboats, sail boards, catamarans, kayaks and paddle boats are available for rent on many beaches.