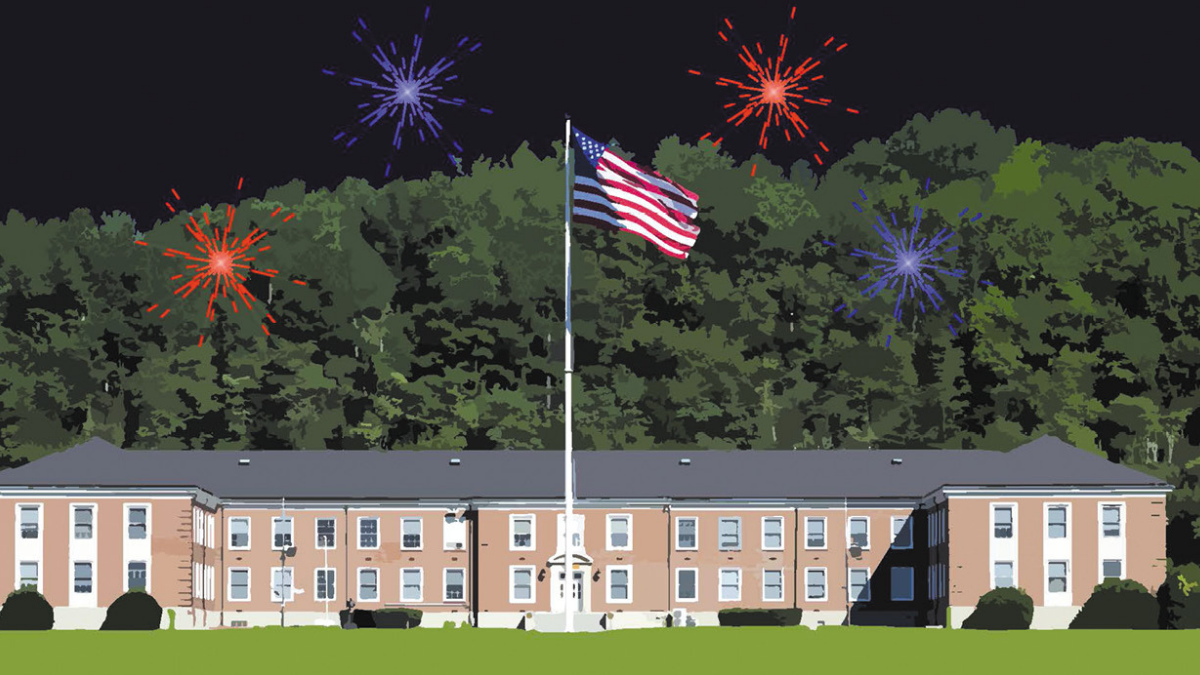 HISTORY OF MARINE CORPS
BASE QUANTICO

Even before the Jamestown Settlement and Captain John Smith explored the banks of the Potomac River in 1608, the Spaniards had visited Quantico over 40 years earlier. Early Scottish colonists later settled in the Quantico area, growing tobacco for export.

The Quantico region was also home to many Revolutionary War heroes. During said war, American, British and French armies used nearby roads to quickly move from one battlefield to another. During the Civil War, Confederate cannons blockaded Union traffic on the Potomac from the banks of the Quantico area. By the 1880s, the land Quantico resides on had been acquired by speculators, who would sell it to the Corps in 1917.

The Commandant of the Marine Corps established Marine Barracks Quantico on May 14, 1917. Thousands would be trained in Quantico during World War I, including units of the much-lauded 4th Marine Brigade. In 1920, Marine Corps Schools was founded, and in the words of then-chief of staff for Quantico, Col. Smedley D. Butler, their purpose was to “make this post and the whole Marine Corps a great university.”

Prospects of a Pacific war in the 1920s showed a need for revolutionary new tactics and hardware. The techniques of amphibious warfare were conceived, and perfected, in Quantico. Marines of the predecessor to today’s Marine Corps Systems Command designed the equipment, which ensured successful future amphibious operations. Quantico aviators also developed close-air support tactics to aid Marines on the ground.

The Caribbean “Banana Wars” would test these new tactics and the equipment developed in Quantico. The tactical units which would carry out the new amphibious operations became the Fleet Marine Force (FMF) in 1935. The FMF, headquartered in Quantico, perfected equipment and techniques in anticipation of its future Pacific role. When the headquarters of the FMF left in 1941, Quantico’s main task became the education of individual Marines, rather than the large unit training it had conducted in the past.

The amphibious warfare techniques developed in Quantico in the years before World War II made victory possible in the conflict’s Pacific theater. Quantico also trained 15,000 lieutenants, and numerous officers from other services, who helped lead the United States to victory.

In 1947, Quantico Marines conceived of carrying troops from ship-to-shore by helicopter and formed a special squadron to test the idea: Marine Helicopter Squadron-1 commonly referred to now as HMX-1. The helicopter techniques they used there later proved invaluable during the Korean and Vietnam Wars. More recently, Quantico played a large part in the development of vertical and/or short take-off and landing (or V/STOL) aircraft and amphibious assault ships. Quantico’s small, but vital, air facility and HMX-1 continue to aid in development, training and education, as well as their most visible duty, support of the U.S. president.

On Jan. 1, 1968, the base was re-designated the Marine Corps Development and Education Command (MCDEC) in the spirit of the command motto, “Semper Progredi” — Always Forward.

During the summer of 1987, Quantico planners studied more efficient and streamlined ways in which MCDEC could ensure the Marine Corps of the future would be the best trained, led, disciplined and equipped fighting force on the planet. On Nov. 10, 1987, the Marine Corps transitioned the Development and Education Command into the Marine Corps Combat Development Command (MCCDC), cementing Quantico’s central role in developing concepts, plans, doctrine, training and equipment for the 21st-century Marine Corps. From the combat development process, other organizations emerged which either stood alone or operated under the MCCDC umbrella.

Marine Corps University was also established in 1989 to provide the structure and policy for professional military education Corps-wide. Professional Military Education (PME) schools, which work alongside the university, include the Marine Corps War College, the School of Advanced War-fighting, the Command and Staff College, Expeditionary Warfare School, the Enlisted PME branch, and the College of Distance Education and Training. In recent years the Marine Corps University has been adding new buildings and renovating old to create a world-class library, research center and campus to further the mission of the university in the 21st Century to educate the leaders of the Marine Corps.

The 1990s were a time of great growth for Quantico. The Marine Corps Research, Development and Acquisition Command, the precursor to today’s Marine Corps Systems Command, began moving to Quantico in 1990. A decade later, MCSC moved to its current location on historic Hospital Point.

In 1995, the base became home to one of the Corps’ most forward-thinking organizations, the Marine Corps Warfighting Laboratory (MCWL). The lab’s mission is to conduct experimentation in 21st-century warfare. War games and experiments produce new tactics and technologies to make the Marine war-fighter ever more capable.

Additionally, the U.S. military, particularly the Marine Corps, began to play a greater role in peacekeeping and humanitarian assistance operations. The Department of Defense established the Joint Non-Lethal Weapons Directorate in 1997 to provide the military with greater flexibility in dealing with the challenges of Military Operations Other Than War.

Quantico is also home to the lifeline and pipeline of the Corps. In 1998, Headquarters Marine Corps moved Manpower and Reserve Affairs (M&RA) and Marine Corps Recruiting Command (MCRC) to Quantico from the Navy Annex in Arlington, Virginia. M&RA has administrative responsibility for all issues related to Marines, their families and quality of life. MCRC ensures young men and women are enlisted to secure the health of the Marine Corps of the future.

With so many diverse yet intricately-woven units, it is appropriate that Quantico is called the Crossroads of the Marine Corps. This is perhaps the only command whose mission touches the furthest reaches of the Corps. Decisions made here impact Marines aboard ship, fighting in the Global War on Terrorism, on guard duty at embassies across the globe, and on reserve duty throughout the U.S. Quantico’s Marines continue to answer the call to threats against the U.S. and provide security and logistical assistance to the National Capital Region.

Commands aboard Quantico put their training and technologies, developed during war and peace, to work to provide the best support for the Marine warfighter.

In 2017, MCBQ celebrated its Centennial — having been the site of training Marines for 100 years. The base has changed much since the days John A. Lejeune or Smedley Butler led it, but it still strives to succeed and continues to grow in order to serve the needs of the 21st Century Marine Corps.

As of 2018, Quantico is home to over 25,000 military, civilian and contractor personnel. MCB Quantico also has a large economic impact on the area, adding $4.8 billion to the local economy. The base offers support to more than 30 federal agencies as well for training exercises year round. New construction is ongoing too. New buildings have been added and old ones renovated at The Basic School, Marine Corps University, Weapons Training Battalion, Marine Corps Embassy Support Group, and Training and Education Command. n