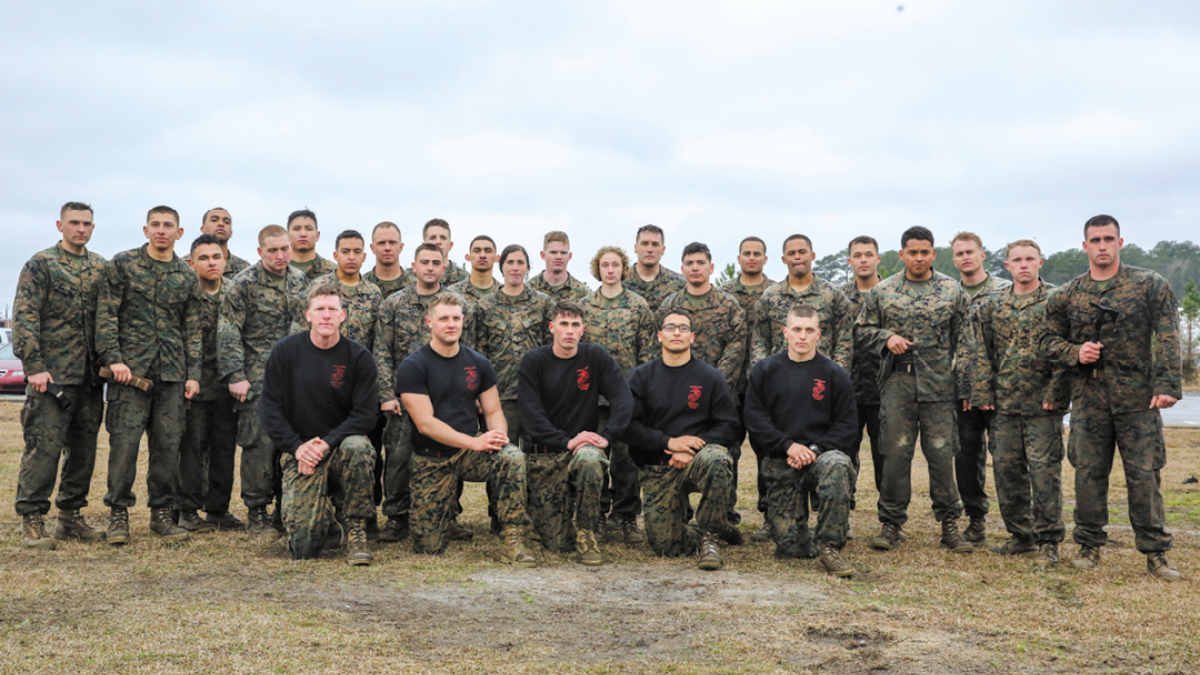 The base had more than 14,000 active-duty military and civilian members, approximately 28,500 family members lived and worked on and around the base and an estimated 6,600 retirees reported in June 2018.

In August 1941, workers began clearing North Carolina forests and draining swamps to build air facilities at Cherry Point, North Carolina, the name of an early 19th century settlement of fishermen, hunters and then a post office, though by the time the bulldozers arrived, the post office had been closed for six years. The military chose the site from a “sunshine map” as one of three in the country with reliable sunshine, a benefit that outweighed its wetlands humming with malaria-bearing mosquitoes, and its hurricanes.

By September, the installation’s name had been changed to Cunningham Field to honor the first Marine Corps aviator, Lt. Col. Alfred A. Cunningham, but it was redesignated as U.S. Marine Corps Air Station Cherry Point on Dec. 1 and was commissioned under that name on May 20, 1942.

Construction began on Nov. 21, 17 days before the Japanese attack on Pearl Harbor in 1941. During World War II, MCAS Cherry Point served as the training grounds for individual Marines and to prepare units for battle in the Pacific Theater, though it was also an anti-submarine base; in 1943, a U.S. Army Air Corps and a U.S. Navy unit each sank a German U-boat prowling just off the North Carolina coast.

Headquarters and Headquarters Squadron’s UC-35D Cessna Encores transport military and civilian dignitaries and are used to support missions requiring cargo and troop movement. For many years, though, the squadron and its H-46 helicopters, “Pedro,” built a sterling reputation for search and rescue, not just for the 2nd Marine Aircraft Wing but also for regional authorities by finding lost people and providing emergency medical transport. Since 1959, they had supplemented the U.S. Coast Guard’s own over-water search and rescues, and from 2005 to 2015, the year the Marines ended the program, Pedro crews were averaging more than 50 lifesaving missions each year.

Logistics Company 21 manages freight and passenger transportation to ensure that things the 2nd Marine Aircraft Wing and MCAAS Cherry Point need, get where they’re needed when they’re needed. In addition, the company operates the base’s Aerial Port of Embarkation/Debarkation under supervision from II Marine Expeditionary Force, and helps the Fleet Assistance Program carry out its legal, postal, exchange, security, personnel administration, freight and passenger transportation duties, and bulk fuel deliveries for the base.

For more than 70 years and under different names, the present-day Fleet Readiness Center East, the Vertical Lift Center of Excellence, has repaired, reworked and rebuilt aircraft, engines and components for all branches of the U.S. armed forces. Its modern industrial complex is North Carolina’s largest industrial employer east of Interstate 95 and has an annual payroll of more than $275 million.

Marine Corps Air Station Cherry Point’s total impact on the local economy in fiscal year 2015 totaled approximately $2.01 billion. Salaries paid to active duty, retired military, current and retired civilians exceeded $1.21 billion, and contracts surpassed $72.5 million. With more than 3,000 employees, MCAS Cherry Point and Fleet Readiness Center (East) were the area’s top employers in 2016. On an even more positive economic note, the Department of Defense has chosen MCAS Cherry Point as a base for the new F-35 Lightning II Joint Strike Fighter. As many as 128 F-35Bs may be stationed at MCAS Cherry Point, and additional F-35Bs will be repaired and upgraded at Fleet Readiness Center (East), according to fighter manufacturer Lockheed Martin. The fighters’ presence is expected to produce 1,220 direct and indirect jobs, $103 million in new salaries, contracting charges and materials, $1.3 billion through 2027 for new construction and infrastructure improvements at MCAS Cherry Point, $300 million through 2024 in facility upgrades and new construction at Fleet Readiness Center (East), and an additional 1,194 military personnel and 2,323 dependents.