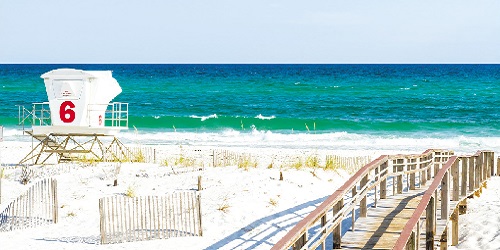 The city of Pensacola has a rich history full of everything from archeological sites to significant historical events. In 1559, the area was the site of the first multi-year European settlement in what is now the continental United States. The first commercial export cargo left the Port of Pensacola in 1743 and consisted of pine, pitch products and the wooden masts and spars for sailing ships. In 1825, then-Secretary of State John Quincy Adams ordered the establishment of forts as well as the navy yard at Pensacola, which signaled the beginning of the Navy’s long association with the city and its people. Visit the Historic Pensacola Village archeological site downtown in the historic district for an in-depth look into Pensacola’s history to include recreated homes, kitchens and shops full of re-enactors giving demonstrations. Some of the stops on these guided tours include the 1805 French Creole Lavalle House and the 1832 Old Christ Church which is one of the oldest masonry church structures in Florida. Some museums in the area include Florida State Museum at 330 S. Jefferson St. and Pensacola Children’s Museum at 115 E. Zaragoza St.

For more military history, you might try the site of Fort George, which is also part of the historic district downtown. You can tour Fort Barrancas on the mainland and Fort Pickens on Santa Rosa Island. In the late 1800s, Fort Pickens was also used to house the Apache chief Geronimo and some of his warriors; it is the largest of four forts that were built to defend Pensacola Bay.

Located a short distance from downtown and onboard NAS Pensacola, you can experience the National Museum of Naval Aviation, the largest aviation museum in the world. The museum provides more than 150 beautifully restored aircraft representing Navy, Marine Corps and Coast Guard aviation. These historic and one-of-a-kind aircraft are displayed both inside the museum’s nearly 350,000 square feet of exhibit space and outside on its 37-acre grounds. The National Aviation Museum also features the Giant Screen Theater.

For more information about Pensacola, its history and its current attractions, contact Visit Pensacola at 800-874-1234 or visit www.visitpensacola.com. You will also find MWR to be a great resource for information and discounts on admissions to local attractions.