For more than 100 years, Naval Submarine Base New London (SUBASE) and our Navy New London team have taken pride in providing outstanding service and support to all newcomers to the installation.

Whatever your status — military, civil service, contractor, family member, full-time employee or student — we are committed to providing you the highest quality programs, facilities and services.

This guide provides an overview of the base, its facilities and services for all newcomers and families at SUBASE. This booklet will augment information provided to you by your command sponsor and the Fleet and Family Support Center.

Regardless of how far you’re moving, how many times you’ve moved or whether you’ve visited SUBASE before, many newcomers experience some trepidation in finding a new place to live, moving household goods, obtaining information on local schools, learning about the community outside the fence and selecting where to go for off-duty recreation.

Becoming familiar with a new area or base is one of the biggest challenges when moving. We hope that the information in this guide will help make your move easier.

In the past decade, SUBASE has undergone many improvements to make living here easier.

From upper base’s new family and on-demand fitness studios to a new computer and internet lab close to those working on waterfront, many infrastructure upgrades continue to improve SUBASE’s support of our fleet, fighters and families.

Military families have reopened great benefits off base too. These include the expansion of the School Age Care facilities and program at our Youth Center. Navy housing, which is now privatized, has installed solar panels on many roofs, reducing energy costs.

More than $300 million has been invested through the PPV project at SUBASE. In addition to new and renovated homes, Balfour Beatty Communities has also provided our military families with three community centers, two swimming pools, a water spray park, three basketball courts, 12 playgrounds and28 bus shelters.

Of course, we recognize that there is much more to a duty station than work and housing.

MWR seeks to provide a wide range of activities offering something for everyone from golf and bowling to outdoor sports and physical fitness.

As our nation’s first permanent submarine base, the significant history and honored traditions of our great Navy and Submarine Force are reflected in the names of our buildings and streets. Our heritage is also on display at the Historic Ship Nautilus and Submarine Force Museum, near the base.

But what makes SUBASE “the first and finest,” is the exceptionally talented and dedicated people who support fleet readiness by providing quality services and facilities to the submarine community and their families.

For this reason alone, we think you’ll find that SUBASE is a great place to live and work! 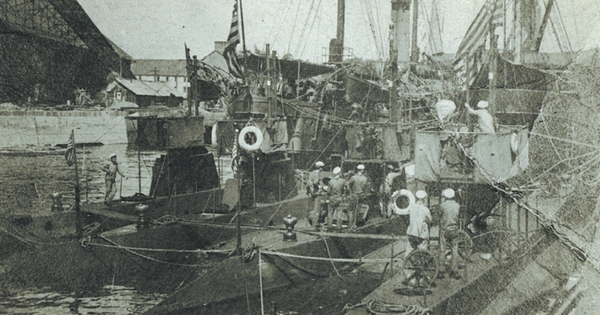 The year 2018 marks the sesquicentennial milestone - 150 year anniversary – of the Navy having an installation along the eastern bank of the Thames River in Connecticut.

Naval Submarine Base New London traces its origin as a naval installation to just after the U.S. Civil War.

Following up on a rider attached to the Naval Appropriations Act of 1867 by a Connecticut Congressman and envisioning the economic potential of a local military installation, the state of Connecticut and its southeastern cities and towns donated land along the Thames River to the Navy to establish a base.

The citizens of New London were especially generous, as their City Council authorized the appropriation of up to $75,000 to purchase the land to be donated.

The rider stated in part that “the Secretary of the Navy is hereby authorized and directed to accept a deed of gift when offered by the state of Connecticut.”

On April 11, 1868, the Deed of Gift was signed, conveyed and presented to Secretary of the Navy Gideon Welles, a native of Glastonbury, Connecticut.

The gifted land would become a Navy Yard, and its first Commander was retired Commodore Timothy A. Hunt, who was called back to service. Living in New Haven, Connecticut, Hunt used the Central Hotel on State Street, New London, when in town to attend to Yard duties as needed. Despite being physically located in the town of Groton, the navy yard became further associated with New London.

The Navy Yard was first used for laying up inactive ships. The congressional appropriations were small, and the Navy had little need for the Yard, which was actually closed from 1898 to 1900 and personnel reassigned.

In 1898, Congress approved a coaling station be built at the Navy Yard for refueling small naval ships traveling through the waters of New England. By 1912, oil replaced coal in warships, and again the Yard was scheduled for closure and the land relinquished by the Navy.

The Navy Yard was spared permanent closure in 1912 by an impassioned plea from local Congressman Edwin W. Higgins of Norwich, who was worried about the loss of federal spending in the region. Higgins believed it was cheaper for the Navy to keep the Yard open than pay for its closure.

With these assets nearby, the Navy Yard in Connecticut soon became the perfect location for the Navy to homeport submarines.

The Yard would change forever as on June 21, 1916, Commander Yates Stirling Jr., was ordered to assume command of the newly designated submarine base, the New London Submarine Flotilla, and the Submarine School.

This established command of the U.S. and Navy’s first permanent, continental submarine base and secured for the base the mantle of “Home of the Submarine Force.” Naval Submarine Base New London (SUBASE) still proudly proclaims as its motto: “The First and Finest.”

With the Yard’s re-designation as a submarine base, the federal government would spend more than $1 million investing in infrastructure there.

The base’s real estate footprint and facilities expanded greatly during the latter part of World War I. By the end of the war, 81 buildings had been built to support 1,400 men and 20 submarines. With victory in hand, the land expansion of the base was slowed through much of the 1920s. However, the Great Depression of the 1930s saw an expansion and enhancement of the physical plant of the base.

President Franklin Roosevelt created a series of federal government employment programs that contributed significantly to the submarine base. Over 26 high quality warehouses, barracks and workshops were built at the base under these federal job-spending programs.

The Submarine Escape Training Tank, long known as the “Dive Tower,” was constructed during this period and became a prominent feature to the local landscape from 1930 to 1992. Generations of Submariners practiced escaping from sunken submarines through the Dive Tower by ascending in a 100-foot column of water.

The second-largest expansion of Submarine Base New London occurred during World War II when it grew from 112 acres to 497 acres. The Submarine Force leaped in size, and the base accommodated thousands of men to service the growing combat fleet.

Immediately after WWII the Submarine Force was significantly reduced, and many famous submarines were sent into storage. Most of the WWII fleet was sold for scrap metal during the early 1960s. The remainder was modified for better underwater capabilities and served until the early 1970s.

Commissioned in 1954 and homeported at the base, Nautilus became the first vessel to transit the North Pole during a historic trip across the Arctic in 1958. Retired from service in 1980, Nautilus became an historic exhibit at the Submarine Force Museum, adjacent to the base, in 1985.

Technological changes contributed to a cycle of renewal and reconstruction of the various physical facilities that supported both submarine operations as well as the Submarine School. The Fleet Ballistic Missile program further expanded the base.

The base was the headquarters for Squadron 14 for many years, which represented the “two crew per boat” philosophy of the Fleet Ballistic Missile Program. Two crews would rotate on one submarine. In the early days, the limited range of missiles required long-term forward positioning of the Ballistic Missile submarine and a supporting drydock and tender. The Squadron 14 forward site was Holy Loch, Scotland. By the 1990s, advances in missile capability eliminated the need for these forward bases and Submarine Base New London became home to only attack submarines.

Today, Naval Submarine Base New London stretches along the east side of the Thames River, straddling the communities of Groton and Ledyard. Groton and the local community proudly call Southeastern Connecticut the “Submarine Capital of the World,” and almost every submariner in today’s Navy will be stationed at the “Home of the Submarine Force” for training. A tour of duty in one of the fast-attack submarines homeported here or with a pre-commissioning crew for a new submarine under construction at General Dynamics Electric Boat Shipyard in Groton may follow.

Occupying more than 680 acres, with more than 160 major facilities and 15 homeported nuclear submarines, Naval Submarine Base New London supports fleet readiness by providing quality service and facilities to our fleet, fighters and families. The base mission is twofold: to homeport and put submarines to sea and to support the Submarine Center of Excellence that trains Sailors to take submarines to sea.

But at the true heart of the base and these commands are some 6,500 active-duty and Reserve Sailors, 2,300 civilian employees and contractors, and their families, who through daily sacrifice and service contribute so much to Navy Team New London, the Navy and this nation.