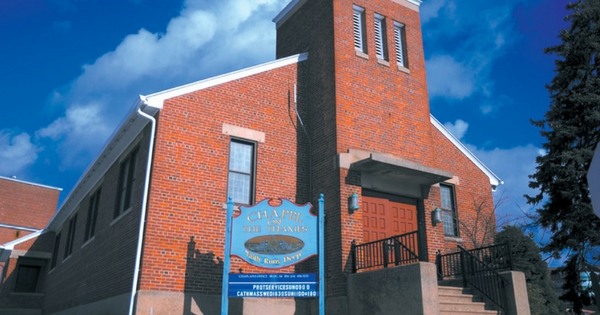 Religious opportunities, including worship services, religious education and other special programs, are available for people of all faiths through the Command Religious Program. Chaplains are located throughout the base and are ready to support the needs of all our people, regardless of faith.

Chapel on the Thames (COT) is on base next to the Dealey Center Theater and is within walking distance of the waterfront. It is the “Sailors Chapel” and the Navy’s “Submarine Memorial Chapel,” recalling and honoring the memories of submariners who have given their lives defending our freedom. The chapel’s Book of Remembrance lists the names of submariners and submarines lost during World War II. Ten pairs of stained glass windows, based on the 148th Psalm, also honor the submarine force family.

Marriage — Couples wishing to marry must contact the SUBASE Chaplain Office at least six months before their planned ceremony to make an appointment with the Catholic priest.

Confessions — For the Sacrament of Reconciliation (confessions), call 860-694-3232 for more information or see the Catholic priest before or after Mass at the Chapel on the Thames.

Grades 6 and up are at 5 p.m. Wednesday at the Chapel on the Thames.

Parents of all sacramental students are asked to bring their child’s baptismal certificate with them for registration.

Rite of Christian Initiation for Adults — Unbaptized adults who are interested in learning about the Catholic faith can call860-694-3232 to set up an appointment.

Marriage — Couples wishing to be married by the Protestant chaplain must make an appointment prior to any reservations for the wedding.

Vacation Bible School — A combined VBS is held at the beginning of the summer at the Religious Ministry Center. We also have a number of combined parish events (such as Holy Thursday Seder Meal) during the year.

During working hours: Chaplain support is available by calling your command chaplain’s office.

After working hours: The duty chaplain is available for chaplain care after normal working hours. Please call dispatch at 860-694-3777 to be quickly connected to chaplain support.

Chaplain’s Religious Enrichment Development Operation (CREDO) is a U.S. Navy Chaplain Corps program with more than43 years of successful operation and is funded directly by the chief of naval operations (CNO) through Commander, Naval Installations Command. The word “credo” means “I believe” in Latin and serves as the inspiration for the acronym. CREDO began in 1971 as “Chaplain’s Response to the Emerging Drug Order” to help recovering addicts confront the emotions associated with addiction and gain strength through greater self-awareness. In 1977, it was expanded to all personnel dealing with difficult issues in their lives and marriages, and the name was changed. The CREDO Detachment at SUBASE New London was established April 19, 2001, to serve the needs of Sea Service and Coast Guard personnel in New England and has since expanded its area of responsibility to include naval installations in New York, Pennsylvania, New Jersey, Indiana and Illinois.

All CREDO programs are free and available to active-duty personnel (regardless of branch of service), activated Reservists and their dependents and families. CREDO programs teach people to speak for themselves, listen reflectively, resolve internal and external conflict, and share hopes and dreams, which does not necessitate a religious or spiritual viewpoint.

We look forward to answering your questions about our programs and helping you register for those that help with the stress that is inherent with military service. You can reach CREDO Groton by calling 860-694-1144 (on base extension 1144), or you can friend us on Facebook (www.facebook.com/CREDOGroton) and visit our website (www.cnic.navy.mil/regions/cnrma/om/religious_programs.html). If you’d like to visit with us personally, we are on Naval Submarine Base New London in Building 84 (Gilmore Hall), Room 103, where we have information available 24/7.