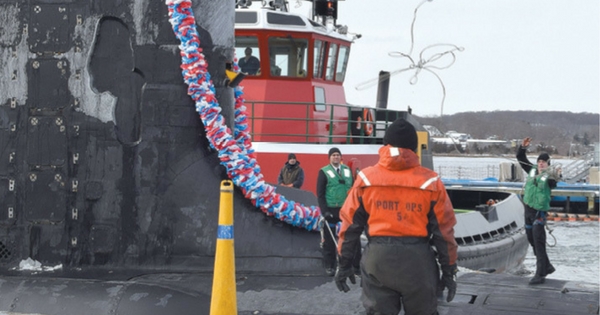 Electric Boat, in Groton, Connecticut, has more than a century of experience building submarines, beginning in 1899 with a 54-foot submersible vessel developed by John Philip Holland. During World War I and just after, Electric Boat received orders to build 85 submarines for the U.S. Navy.

Since that time, Electric Boat has continued building submarines for the Navy to include its nuclear fleet of Los Angeles-, Seawolf- and now Virginia-class submarines — some of which are currently stationed at Naval Submarine Base New London.

The Office of the Supervisor of Shipbuilding is the liaison between the Department of the Navy and the Electric Boat. It is the supervisor’s responsibility to administer all contracts, provide government-furnished equipment and outfit ships, assure that the requirements of the contracts are fully met, ascertain that satisfactory production progress is maintained and ensure that the fleet is provided quality warships, fully prepared to sail “in harm’s way.” The supervisor’s office has been recognized by the secretary of the Navy with the award of a Meritorious Unit Commendation in 1981, 1985, 1989 and 2006.

The history of the Supervisor of Shipbuilding, Conversion and Repair, U.S. Navy — better known as SUPSHIP, Groton — dates back to 1931. That year, the U.S. Navy and the Electric Boat began negotiations for the construction of USS Cuttlefish (SS 171) at Groton. As a result, the Office of the Superintending Constructor was established July 11, 1931. Shortly thereafter, on Aug. 1, 1931, the Office of Inspector of Machinery was established. Its responsibility covered the inspection of construction, machinery and materials. Under the joint direction of these two offices, the keel of the Cuttlefish was laid Oct. 7, 1931. The boat was delivered June 8, 1934.

The Office of Superintending Constructor and the Office of the Inspector of Machinery continued until May 11, 1940, at which time their efforts were consolidated into one office — the Supervisor of Shipbuilding, U.S. Navy.

Today, with the completion of Los Angeles-class, Ohio-class and Seawolf-class submarines, the command is focused on Virginia-class construction programs awarded by the Naval Sea Systems Command. In 2006, the Navy also awarded Electric Boat a $13.7 million contract modification for nuclear submarine work. Currently, Electric Boat employs 10,500 people between its Groton, Connecticut, and Quonset Point, Rhode Island, facilities. The latter facility was established in 1974.