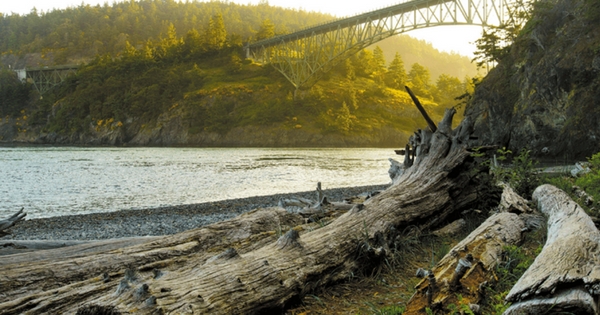 It’s easy enough to reach Whidbey Island by vehicle through Anacortes across the Deception Pass Bridge on State Route 20, though many people prefer the romance of a ferry ride and the mountain and saltwater vistas as the boat threads its way among the islands.

Seattle-Tacoma International Airport, 12 miles south of downtown Seattle is the main arrival point for air travelers, and the USO Northwest’s SeaTac Center there provides military members and their families with a nursery, sleeping facilities, showers, hot food and snacks, free Wi-Fi, computers and internet access, a separate family-friendly room, comprehensive travel information and assistance, temporary luggage storage and a lounge that includes five big-screen TVs and a library. It’s on the airport mezzanine level outside security above the Southwest Airlines ticketing counter and open 24/7. For more information, go to www.usopsa.org or call 206-246-1908.

All 13 car rental agencies that operate at SeaTac Airport are at a separate rental car facility. Dedicated shuttle buses collect rental car customers from two pick-up areas outside baggage claim at the north and south ends of the main terminal 24/7.

Light rail service arrives and departs from the SeaTac/Airport Station, connected to the fourth floor of the airport parking garage. Rail service extends from the airport to downtown Seattle and the University of Washington.

The King County Metro Bus system and Sound Transit regional express buses also provide service to and from the airport.

Only Yellow Cab offers taxis at SeaTac Airport, and cabs are always waiting on the third floor of the parking garage. Call 206-622-6500.

Courtesy buses for area accommodations and off-site parking lots collect and drop off passengers on the third floor of the parking garage at Islands 1 and 3.

Reservations are recommended and can be made at www.wsdot.wa.gov/ferries.

Nine round trips per day from SeaTac International Airport to all Whidbey Island communities are provided by the Whidbey-SeaTac Shuttle. Island stops are conveniently located near state routes 20 and 525 at minimarts and service stations. The 15 vans and buses travel on the Clinton/Mukilteo Ferry and have first-on/first-off priority; the trip from the airport to downtown Oak Harbor takes about two hours and 15 minutes. Reservations must be made in advance.

On Whidbey Island, buses circle Island Transit’s 14 routes from 3:45 a.m. to 7:45 p.m. Monday through Friday, though not Saturdays, Sundays or major holidays. All Whidbey Island rides are free, and all Island transit buses are wheelchair accessible and have bike racks. Vanpools can be arranged, including military commuter vanpools, and paratransit service is available for those whose disability prevents them from using regular bus service. Whidbey Island has eight Park & Ride lots.