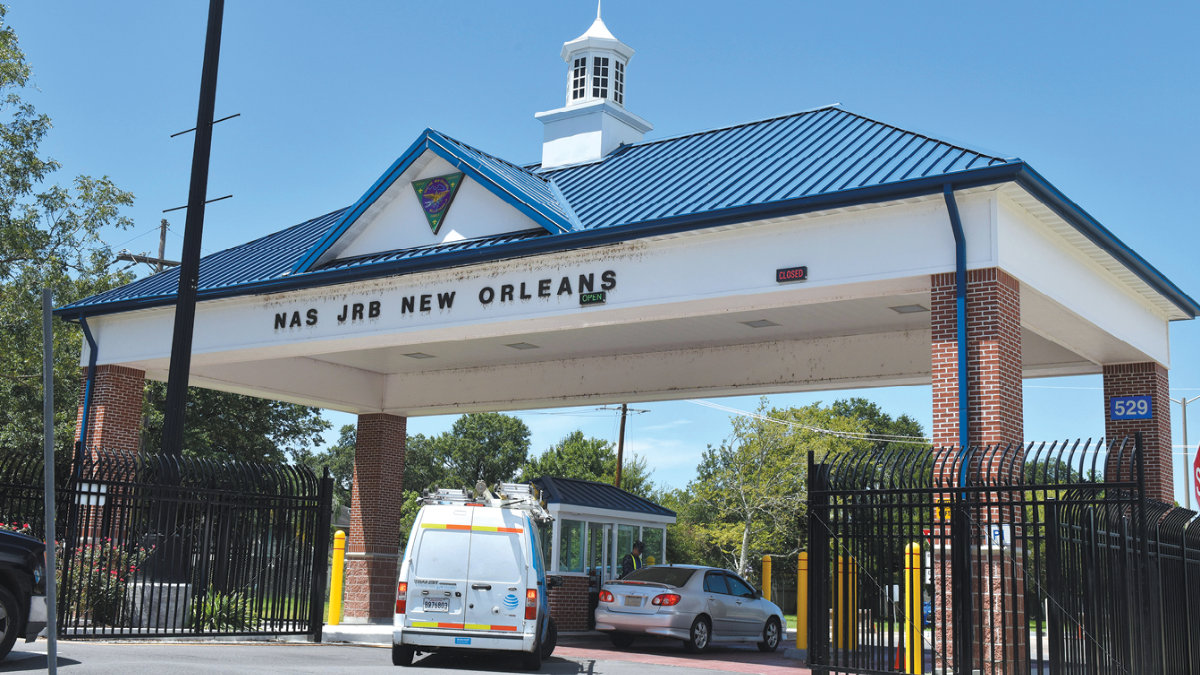 Naval Air Station Joint Reserve Base (NAS JRB) New Orleans is one of only two joint air Reserve military bases in the United States. It comprises about 5,200 acres in Plaquemines Parish and is composed of more than 7,000 personnel in 33 tenant commands. The installation’s airfield supports local squadrons from the Navy Reserve, Coast Guard, Marine Corps Reserve and the Louisiana Air National Guard. Two operational runways are maintained, with the larger offering 10,000 feet of usable space as well as a full complement of approaches for both instrument and visual landings. Multiple training detachments from the Navy, Air Force, Air National Guard, state, federal and joint service organizations are frequently supported through base operations.

The base also serves as an interim support base for disaster relief operations and actively participated in operations from Hurricane Katrina through Hurricane Isaac as well as national-interest events.

The primary mission of NAS JRB New Orleans is to provide superior operational and training environments for active-duty and Reserve components from all branches of the armed services while sustaining the full spectrum of combat, peacetime and humanitarian operations. The base also serves as a platform for assistance with Homeland Security air defense through the Louisiana Air National Guard as well as search-and-rescue efforts for much of the Gulf Coast by Coast Guard Air Station New Orleans.

The year 2002 was a banner one for the base as NAS JRB was recognized as the Navy’s most outstanding military shore installation and received the Conway Trophy for Base Installation Excellence. Also in 2002, Belle Chasse Academy opened, making it the first charter school on a military installation, and the number of on-base houses tripled with the completion of a public-private housing project, one of the first in the country.

In 2003 and again in 2005, NAS JRB was nominated by Navy Region Southeast to be its representative for the Secretary of Defense Shore Installation Excellence Awards given to the best military base of all the branches of service.

After Hurricane Katrina devastated the central Gulf Coast on Aug. 29, 2005, NAS JRB became the center of DOD rescue-and-recovery efforts. During the first 10 days after the storm, more than 10,000 military personnel and relief workers were airlifted into NAS JRB, along with 18 million pounds of relief supplies. NAS JRB, with the only operating runways in New Orleans, became the primary search-and-rescue airfield for flights whose crews saved more than 10,000 lives in the New Orleans area.

While still recovering from Hurricane Katrina and preparing for the 2006 storm season, the first phases of the 2005 Base Realignment and Closure (BRAC) Commission were set into motion, and NAS JRB bid farewell to Patrol Squadron (VP) 94 as the squadron decommissioned on March 31, 2006. This was followed by the decommissioning of the 926th Fighter Wing of the Air Force Reserve on Sept. 30, 2006.

In 2008, the base welcomed the Airborne Early Warning Squadron (VAW-77), the Night Wolves, flying the E-2C Hawkeye and celebrated its 50th anniversary at its current location.

In 2011, a new Navy Exchange and Commissary occupying more than 100,000 square feet opened on base to serve the military and their families. A new Marine Barracks was also completed and opened, and construction began on a 400-seat auditorium at Belle Chasse Academy. The building is a joint usage facility, available for base functions during non-school hours.

In October 2011, construction began on a new base air traffic control tower. The tower now gives air traffic controllers a better view of the airfield, provides more room for the training of new air traffic controllers and is designed to facilitate installation of new electronics as they come into future use. Growth aboard NAS JRB New Orleans continued in 2012 as Aviation Arbor Recreational Vehicle Park and a base sports complex opened in the spring. The RV park has 45 spots, including two that are handicap-accessible, and the sports complex features a quarter-mile running track, softball field, football and soccer field, playground, tennis courts, pavilion and concession stand, with restrooms. In August 2012, Hurricane Isaac deluged the area with rain and wind, knocking power out on base for days, uprooting trees and damaging buildings. Recovery from this storm continued throughout 2013.

In early 2013, the base saw the decommissioning of VAW-77, the opening of the Belle Chasse Academy auditorium and the reopening of the Liberty Center, which was heavily damaged in 2012 during Hurricane Isaac.

Activities aboard the air station continued during 2016 with several public works projects including a base-wide drainage improvement project and an extensive redesign and upgrade to the main gate from Highway 23. Also, running paths throughout the base were renovated and improved as were athletic fields and community recreational facilities. Mishap-free flight hours numbered more than 18,000 as the transient line recovered, fueled and launched 565 transient aircraft with zero mishaps, and handled 968,400 pounds of cargo.

In 2017, NAS JRB New Orleans hosted its first air show in six years, highlighted by the Navy’s flight demonstration team, The Blue Angels. The three-day event drew more than 220,000 visitors to the base.

NAS JRB New Orleans regularly interacts with government and community organizations to improve public relations and ensure the Navy is recognized as a good steward of public funds and an involved member of the local community. With the oldest and largest state charter school on board a DOD installation and an “A” school recipient, Belle Chasse Academy, NAS JRB New Orleans provides superior educational services to more than 900 K-8 students. Along with the more than 900 family units on board the installation, NAS JRB New Orleans is easily recognizable as a superb family environment.

As home to commands representing multiple government agencies, NAS JRB New Orleans supports a unique population who live, work or serve on board the installation. On a daily basis, NAS JRB New Orleans is a constant center of activity for air operations, ground operations and a variety of family support services. From major military construction projects to the replacement of the smallest segment of sidewalk, NAS JRB New Orleans consistently and aggressively implements improvements to operations support, quality of life and the safety of personnel.