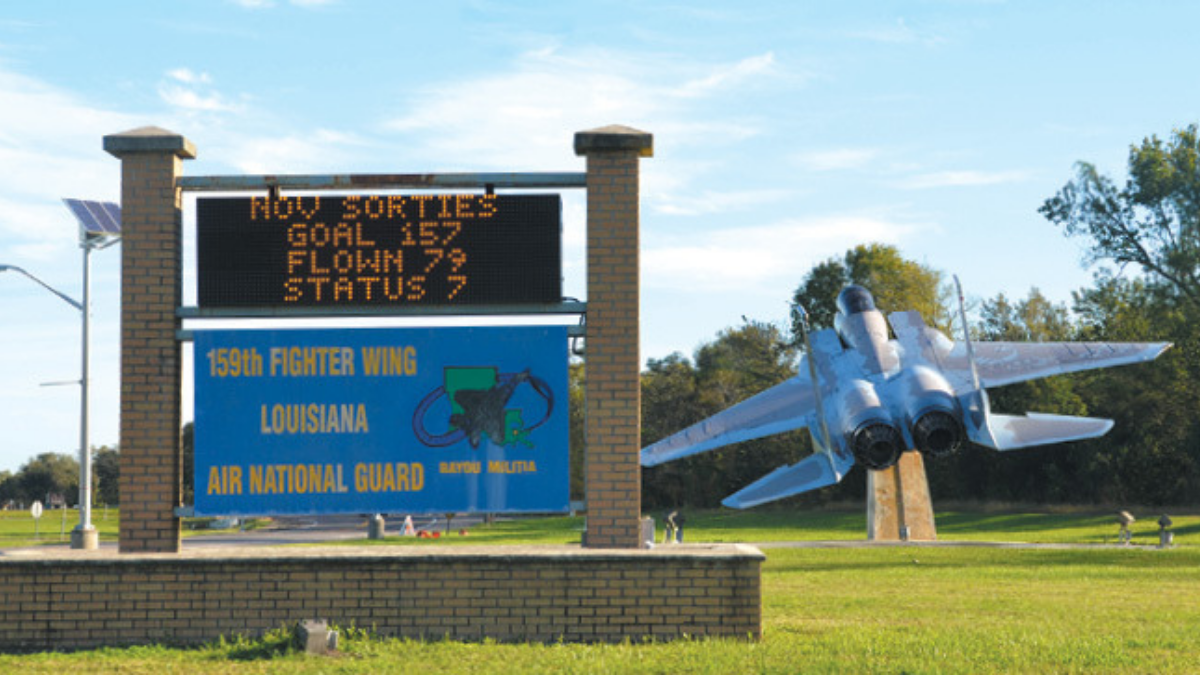 The 159th Fighter Wing is an Air National Guard fighter unit of more than 1,400 men and women. It is operationally gained by Air Combat Command and nicknamed the “Bayou Militia.” Assigned pilots fly the F-15C and F-15D Eagle aircraft.

The 159th Fighter Wing is composed of an Operations Group, Maintenance Group, Medical Group and Mission Support Group. Four geographically separated units are also attached to the 159th Fighter Wing: the 122nd Air Support Operations Squadron in Pineville, the 259th Air Traffic Control Squadron in Alexandria, the 236th Combat Communications Squadron in Hammond and the 214th Engineering Installation Squadron in Belle Chasse. Each of these geographically separated units has its own distinct mission.

The Louisiana Air Guard is unique compared with other Reserve Force components in that it is tasked with dual missions. The wing provides worldwide deployable aircraft and combat resources, operated, maintained and supported by professional Louisiana Airmen dedicated to supporting both federal and state missions.

The LA ANG provides its Airmen the opportunity to enjoy civilian life while contributing to the welfare of their country, state and community.

The 159th Fighter Wing was awarded the coveted “Outstanding Air National Guard Unit” honor in 2010. This prestigious award is given annually to the Air National Guard unit that meets or exceeds criteria from the National Guard Bureau. In addition, the wing received an “Excellent” rating during its Operational Readiness Inspection in both 2009 and 2010. These Airmen have shown extreme professionalism and dedication to their mission of protecting the U.S. and its allies.

The wing’s mission is to provide fully staffed units prepared to accomplish all federal, state and local missions; provide high-quality support to Airmen and their families; and to add value to our communities by involvement in state and local programs.

Four main functional groups comprise the Wing: operations, maintenance, mission support and medical, each with its own squadrons and the four geographically separated sites mentioned earlier.

The Operations Group has two subordinate units: the 122nd Fighter Squadron and the 159th Operations Support Flight. The group trains and supports aviators to maintain regular flying schedules, to support the alert mission for immediate worldwide deployments and for employment in accordance with war plans.

The 122nd Fighter Squadron is a diverse and dynamic squadron that is combat-ready to deploy anywhere, anytime, employing the venerable air superiority of the F-15C/D Eagle Fighter. This worldwide commitment is the driving force behind a sharply honed team of professionals and has resulted in deployments around the world. Together with the 159th Fighter Wing, the 122nd Fighter Squadron is tasked to provide air superiority over Louisiana and the Gulf Coast while supporting the North American Aerospace Defense Command. Performing this vital role requires an active air defense alert 24/7 at NAS JRB.

To sustain the fast-paced tempo, the wing has a highly dedicated and well-trained cadre of maintenance and support personnel.

The maintainers are tasked with on- and off-equipment maintenance of the Eagles, including aircraft servicing, unscheduled maintenance, pre-flights, through flights, basic post-flights and combat turns with live or training ammunition. In addition, support personnel perform everything from operations, life support and mobility to personnel and administrative functions.

With more than 500 military and civilian personnel, the 159th Mission Support Group is responsible for all base support and customer service for the wing and the geographically separated units at their sites throughout the state. The group also maintains combat and contingency readiness forces that deploy worldwide. This group encompasses the communications flight, civil engineering squadron, logistics readiness squadron, security forces squadron, force support squadron and contracting.

The National Guard’s purpose is to protect life and property and to preserve peace, order and public safety for its state. The mission also includes information-sharing with emerging countries on the importance of homeland defense.