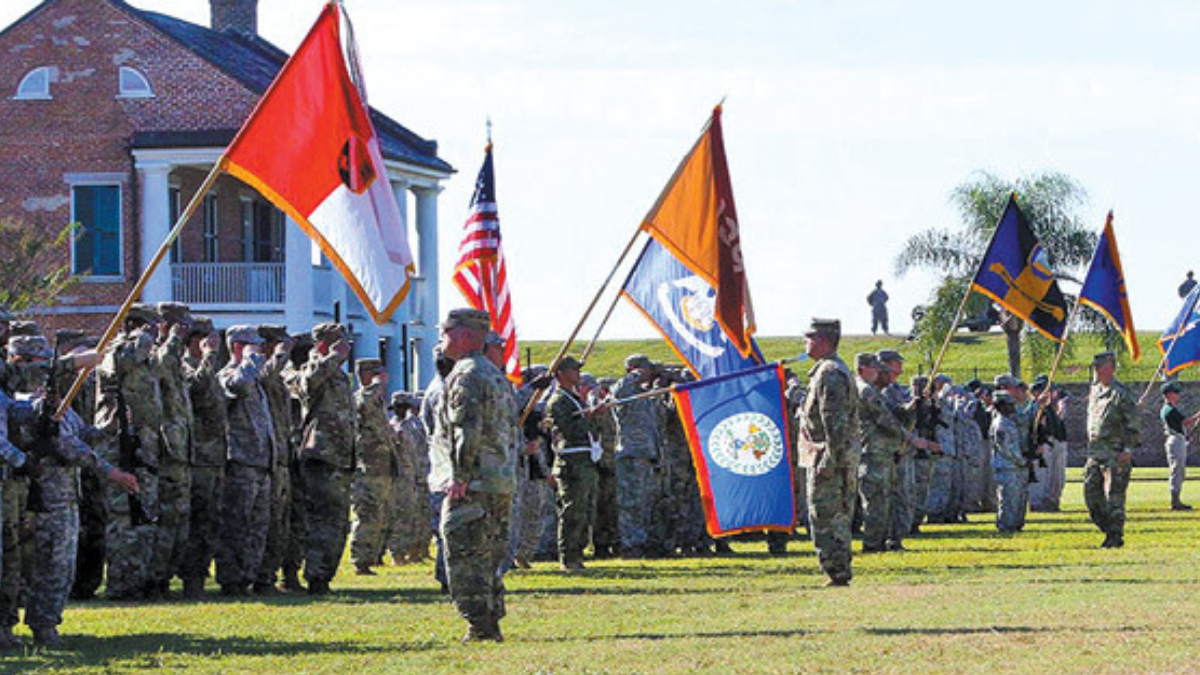 The mission of Jackson Barracks is to serve as a power projection platform and command and control center for emergency operations, as well as improve the readiness posture of units, other tenant organizations and state and local partners. Jackson Barracks provides an excellent quality of life for Soldiers, Airmen, employees and their families through outstanding support of all training and operations.

The historical Jackson Barracks Complex, including additional acreage added since its original construction in 1834-35, occupies 100 acres of land in Orleans Parish, extending from the Mississippi River to a mile north of St. Claude Avenue, and from the St. Bernard Parish line on the east to Delery Street on the west. Jackson Barracks is the home of the Louisiana Military Department and headquarters for the Louisiana National Guard. Prior to Hurricane Katrina in 2005, it also provided armories for 14 Army and Air National Guard units.

The need for a “Garrison of Troops” in the event of an insurrection and a training post for U.S. troops stationed at Mississippi River forts prompted the U.S. government to make plans for the barracks as early as 1823.

After the War of 1812, the U.S. established a policy of national power that was well accepted. It was resolved that never again would the navy of an enemy be able to land raiding parties in U.S. ports and harbors to loot and plunder, burning towns and cities as the British did in the War of 1812. All ports and harbors were to be protected by a system of fortifications. In this area Fort McComb and Fort Pike were constructed below the city of New Orleans. Fort Jackson on the west bank of the Mississippi River below the city was also completed, and Fort St. Phillip on the east bank was improved. In addition to Jackson Barracks being constructed as a training post for the troops of these forts, it served as a supply base and rotated troops to and from the isolated locations. The Post Magazine at the barracks was also built in early 1837 to store reserves of ammunition for the four forts’ heavy artillery.

In 1833, a 67-acre strip of land to build the barracks was purchased by the U.S. government for $31,500. This land fronted the Mississippi River and was 3 miles below the city of New Orleans.

Congress appropriated $180,000 for the new barracks, and after much debate, chose a site along the Mississippi River about 4 miles downriver from the city and only a mile from the site of the Battle of New Orleans. Lt. Frederick Wilkinson, a 23-year-old West Point graduate, designed and supervised construction of the barracks beginning in February 1834 until completion in December 1835. Built on a 300-by-900-foot track fronting the river, the barracks were designed to house four companies of infantry plus hospital and support facilities. The buildings were surrounded by a 12-foot-high brick wall reinforced with round flank towers at each corner. Two of the original towers remain and are used as distinguished visitor quarters. Total construction cost was $182,999 for a complex that was one of the finest of its kind in the U.S.

World War I changed the barracks from a tranquil and picturesque old post into an active processing and training center. In 1918, new wooden buildings were erected, including one for use by the YMCA, as well as mess halls, horse stables, additional hospital wards and troop quarters at a cost of $60,000.

Following World War I, Jackson Barracks was rescued from extinction when the state requested that the post be turned over to the Louisiana National Guard. On Feb. 1, 1922, the state assumed control of the installation, with Jackson Barracks becoming the home of the famous Washington Artillery (141st Field Artillery Battalion) and the 108th Cavalry with its many horses.

In 1936, Jackson Barracks was the recipient of a major restoration and new construction project that built a modern three-story headquarters building (Fleming Hall), restored and updated the historic buildings, built new homes for the staff, constructed new cavalry facilities and refurbished support facilities.

Jackson Barracks also played a prominent role in New Orleans’ Mardi Gras tradition. Rex, the acknowledged King of Carnival, would send an order to the commandant to receive him. King Rex would then arrive at the barracks by boat to be welcomed on the parade ground by a battalion of infantry and the regimental band. In keeping with Mardi Gras tradition, the post commander would formally hand over control of the city to King Rex and then escort him into the city to begin his reign of frivolity and merriment.

During World War II, New Orleans became a major port supporting the war effort throughout the Americas and in both theaters of war. In accordance with the lease agreement, most of the post facilities and grounds were used by the U.S. War Department to operate a port of embarkation. However, the headquarters building, residence structures, a warehouse and a few garages were retained for use by the Louisiana National Guard. After the war, Jackson Barracks reverted to state control and once again became the home of the Louisiana National Guard.

In 1976, the architectural and historic significance of Jackson Barracks was recognized and it was listed on the National Register of Historic Places as a historic district of national significance. With the exception of only one building and two corner towers that were lost in 1912 when the Mississippi River levee was constructed in its current location, the post retains its original antebellum layout and architectural integrity. Jackson Barracks is arguably the finest complex of antebellum architecture remaining in the U.S. In the aftermath of Hurricane Katrina, the historic buildings were carefully restored and returned to their original function for military use.

In 2005, Hurricane Katrina brought severe flooding throughout New Orleans, with St. Bernard Parish and the Lower Ninth Ward, including Jackson Barracks, particularly hard-hit. All buildings at Jackson Barracks were destroyed or damaged by storm flooding with water depths ranging from 3 feet at the levee to almost 18 feet at the northernmost part of the barracks. The Louisiana National Guard headquarters was temporarily relocated to Camp Beauregard while a herculean effort to rebuild Jackson Barracks was underway.

Using construction money provided by Congress and administered through the National Guard Bureau as well as funds provided by the Federal Emergency Management Agency, the Construction Facilities Management Office designed a new master plan for the redevelopment of the barracks. New Readiness Centers for the Joint Force Headquarters, the 141st Field Artillery (Washington Artillery) and the 139th Regional Support Group were reconstructed as well as the Adjutant General’s Headquarters. In addition to these facilities, reconstruction continued on other support facilities, temporary lodging and the historical housing on Jackson Barracks. The Louisiana Cottages were built to provide additional housing on the barracks for Guard personnel, in particular those affected by the storm. At the same time, funding was obtained to renovate the historic garrison buildings. The new construction continues the architectural design and ambience of the historic garrison buildings, resulting in one of the most attractive National Guard installations in the country.

For almost 175 years, Jackson Barracks have survived war, the ravages of time, flooding and numerous hurricanes. With the completion of the construction of the Jackson Barracks Military Museum Complex, the post’s unique and distinguished history will be showcased for future generations to view and enjoy. Today, the Jackson Barracks restoration reflects the original design and heritage envisioned for the installation. As the headquarters for the Louisiana National Guard, it serves as an enduring monument to the citizen Soldier, the military and the nation.

For more information on the Louisiana National Guard, visit its website, http://geauxguard.la.gov.