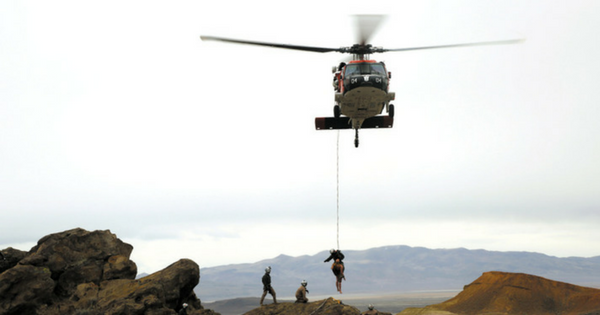 Naval Air Station Fallon traces its origins to 1942, when the Civil Aviation Administration and the Army Air Corps began building four airfields in the Nevada desert. As part of the Western Defense Program, initiated to repel an expected Japanese attack on the West Coast, runways and lighting systems were constructed in Winnemucca, Minden, Lovelock and Fallon.

As the war in the Pacific intensified, the Navy recognized a need to train its pilots in a realistic environment using all the tactics and weapons being developed, and Fallon was the Navy’s choice. In 1943, the Navy assumed control of the two 5,200-foot runways. Construction soon began on barracks, hangars, air traffic control facilities and target ranges. On June 10, 1944, Naval Auxiliary Air Station Fallon was commissioned.

Training operations at NAAS Fallon peaked in the summer 1945, when an average of 21,000 takeoffs and landings were recorded and more than 12,000 flight hours were logged at the station. Ironically, just as construction of the initial airfield project was completed and the training program was going full tilt, the Japanese surrendered and brought an early end to NAAS Fallon. Eight months after completion of a new 24-unit housing project, five months after a new gym was built and only three months following the opening of a new commissary, NAAS Fallon was placed in a reduced operation status. One month later, on Feb. 1, 1946, the facility was further reduced to maintenance status. On June 1, 1946, it went into caretaker status, and the official designation of “naval auxiliary air station” was removed.

For the next five years, the Bureau of Indian Services utilized what had been NAAS Fallon. Buildings once used by pilots to prepare to meet challenges from the deck of a pitching aircraft carrier vanished. The swimming pool, once a blessing for Sailors trying to escape Nevada summer heat, became a home for pigs.

The Korean conflict restored life to the small desert outpost. Once again, the Navy found reason to train pilots in its new, sophisticated jet aircraft. In 1951, Fallon became an auxiliary landing field for NAS Alameda, California. On Oct. 1, 1953, NAAS Fallon was re-established by order of the secretary of the Navy. The present-day bombing ranges, Bravo 16, 17 and 19, were also created that year.

Over the next 30 years, Fallon grew to become one of the top training sites for Navy and Marine Corps pilots and ground crews. New hangars, ramps, housing and other facilities sprang up to give the installation new and greater capabilities.

The Air Force came to Fallon in 1956 with the establishment of the 858th Air Defense Group, part of the country’s early warning radar system. For the next 19 years, the Air Force command provided vital assurance to America’s national security.

The airfield became known as Van Voorhis Field in 1958, named after Lt. Cmdr. Bruce A. Van Voorhis, a Fallon native who received the Medal of Honor posthumously for his heroic service in the South Pacific during World War II.

The airfield’s fourth and most sophisticated range, the electronic warfare range, was established in 1967.

On Jan. 1, 1972, the Navy recognized Fallon’s importance to naval aviation by upgrading the base to a major command, and thus, Naval Air Station Fallon was commissioned.

During the 1980s, the air station experienced dramatic growth as a state-of-the-art air traffic control facility and new hangars were constructed. In response to challenges faced by deployed air wings in conducting contingency strikes into Lebanon from aircraft carriers in the Mediterranean Sea, the Navy built a new training center. In 1984, the Naval Strike Warfare Center was established as primary authority for integrated strike warfare tactical development and training. It quickly became the “graduate-level” education that air wings went through during their interdeployment training cycle: After completing its four-week training at Fallon, an air wing was ready for combat anywhere in the world.

In 1985, Fallon received a new tool for aircrew training: the Tactical Aircrew Combat Training System. This system provides squadrons, carrier air wings and students from the Naval Strike Warfare Center with visual, graphic displays of their missions, eliminating guesswork. Strike Fighter Squadron 127, the “Desert Bogeys” aggressors, moved to NAS Fallon in 1987 to become the air station’s only permanently based squadron.

During the 1990s, the base continued to expand its role. A new hangar, ramp and academic building were built in 1995 to accommodate the move of Navy Fighter Weapons School (TOPGUN) and Carrier Airborne Early Warning Weapons School (Top Dome) from San Diego to Fallon in early 1996.

In July 1996, the Naval Strike and Air Warfare Center was commissioned, combining the functions of TOPGUN, the Carrier Airborne Early Warning Weapons School and the Naval Strike Warfare Center into one command under a two-star admiral. The training center has continued to teach all aspects of tactical integrated air warfare, including air wing training detachments, TOPGUN classes and E-2 Hawkeye mission commander courses as well as advancing tactics and procedures.

In 1996, Fighter Composite Squadron 13 (VFC-13) replaced VFA-127 as the adversary squadron at Fallon, taking over the duties of the disestablishing Desert Bogeys in flying F-5 Tiger IIs that same year.