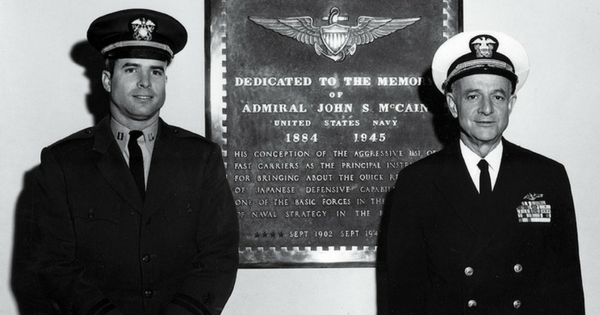 On July 16, 1957, the first shovel of earth was thrown, marking the beginning of Naval Auxiliary Air Station Meridian, which was commissioned July 14, 1961.

Capt. W.F. Krantz received the golden key to the air station, and senior Mississippi U.S. Sen. John C. Stennis was the guest speaker for the ceremony that opened the $60 million base. At that time, the operations area was named McCain Field in honor of the late Adm. John S. McCain of Teoc, Mississippi.

VT-7 arrived at NAAS Meridian on July 12, 1961, then split Dec. 15 to form its sister squadron, VT-9. NAAS Meridian continued to grow, and by July 1968, the station became a full naval air station. The years brought an increase in building development and family housing units.

In 1968, and again in 1969, 300 aircraft from Pensacola arrived to escape the fury and destruction of Hurricane Gladys and Hurricane Camille, respectively.

In August 1971, Training Air Wing 1 was commissioned and VT-19 was established. The wing motto became “Readiness for victory at sea through training.” That October saw the arrival of the TA-4J, the new advanced jet trainer based on the A-4 Skyhawk.

In April 1973, President Richard M. Nixon, accompanied by Stennis and many other high-ranking military and civilian officials, attended the dedication of the new Naval Technical Training Center, known locally as the Stennis Center. It was officially commissioned April 17, 1974.

Naval Air Station Meridian was selected and upgraded to a major shore command Oct. 1, 1982. In March 1984, NAS Meridian was one of 15 installations chosen for the Department of Defense Model Installation program.

In September 1985, the enlisted galley was dedicated to the memory of Marine Lance Cpl. Roy M. Wheat, a Moselle, Mississippi, native and Medal of Honor recipient who was killed in Vietnam.

The Regional Counterdrug Training Academy (RCTA) was established in 1992. Operated by the Mississippi National Guard, it provides “street-level” counterdrug training to civilian law enforcement officers primarily from the states of Louisiana, Mississippi, Alabama, Georgia and Tennessee.

In July 1994, Training Squadron 23 (VT-23) moved from Kingsville, Texas, to NAS Meridian. In October 1997, the newly renovated Combined Bachelor Quarters was dedicated and named in memory of Ensign Jesse L. Brown, a Hattiesburg, Mississippi, native, who was the first African-American naval aviator and also the first African-American naval officer to lose his life in combat.

In October 1998, VT-19 was redesignated VT-9. The TA-4J Skyhawk was retired in 1999. In December of that year, VT-7 assumed the advanced training mission using the T-45C Goshawk, the Navy’s newest jet trainer. At that time, VT-23 was disestablished.

In June 2003, the library was dedicated and named in memory of Lt. j.g. Andrew Triplett, a Shuqualak, Mississippi, native, who was killed during the terrorist attack on USS Cole
(DDG-67) in Aden, Yemen, on Oct. 12, 2000.

In July 2004, the last T-2C Buckeye left NAS Meridian, marking the end of Navy strike pilot training in that aircraft. Two months later, the search and rescue mission was divested.

Over the years, NAS Meridian has become a refuge for both aircraft and people who have been evacuated from the coast because of hurricanes. As early as September 1965, hundreds of planes from Florida bases arrived to escape the wrath of Hurricane Betsy.

During the Gulf Coast evacuation for Hurricane Andrew in August 1992, NAS Meridian provided transient support for 53 TH-57 helicopters from NAS Whiting Field that were en route to NAS Memphis; additionally, temporary housing for more than 1,000 evacuated military personnel and dependents was provided. More than 50 aircraft from NAS Whiting Field and NAS Pensacola were flown to Meridian in June 1995, when Hurricane Allison threatened the Gulf Coast.

During Hurricane Ivan in September 2004, nearly 1,000 evacuees (and more than 200 pets) from the Gulf Coast found a safe haven at NAS Meridian. McCain Field also provided refueling services for 100 H-57s from Whiting Field that were going to and from their evacuation site in Millington.

August 2005 brought Hurricane Katrina to the Gulf Coast. NAS Meridian provided safe haven for 1,000 military and family members who were evacuated from that region. The station also hosted FEMA, which set up its Mississippi Operational Area on board. FEMA received and dispatched 3,000 trucks loaded with supplies during its relief efforts. Also, the U.S. Public Health Service used half of Hangar 1 to establish a 500-bed Federal Emergency Contingency Unit. It was designed to provide non-acute care for patients transferred from hospitals on the Gulf Coast, where beds were needed for more critically ill patients.

In 2011, NAS Meridian celebrated its 50th anniversary and the 100th anniversary of naval aviation with its “Golden Wings Over Meridian” Air Show, March 26-27. The event was attended by more than 20,000 spectators and featured the Navy’s flight demonstration team, the Blue Angels. The Honorable Ray Mabus, secretary of the Navy and former Mississippi governor, also attended the air show.

NAS Meridian was recognized in 2012 by the secretary of the Navy for its continued efforts in energy conservation, receiving the SECNAV Blue Certification, which was upgraded to Gold in 2013. Also in 2012, NAS Meridian was recognized by Navy Region Southeast for its community service efforts with three first-place and one second-place honor in the Navy Community Service program.

In 2013, NAS Meridian was certified as a StormReady Community by the National Weather Service. Also in 2013, NAS Meridian received the secretary of the Navy Gold Certification for energy conservation and awareness. The installation’s newspaper, The Skyline, was recognized in the Metro Newspaper Category in the Russell Egnor Navy Media Awards program. The Roy M. Wheat Galley was awarded the second consecutive five-star accreditation for outstanding food service by the Capt. Edward F. Ney Inspection Team. The branch health clinic was awarded the Blue “H” — Navy Surgeon General’s Health Promotion and Wellness Silver Eagle Award.

NAS Meridian is dedicated to the environment and energy conservation. The installation was selected as a 2013 CNO Environmental Restoration (Installation) Award winner and as Southeast Region’s 2013 Environmental Stewardship Flagship. It also earned the Secretary of the Navy Energy and Water Management Award (Gold Level) for the second consecutive year.

Meridian accomplished a number of “firsts” in 2015: first Joint Land Use Study with Lauderdale and Kemper counties and the cities of Meridian and Marion; first Navy airfields to use LED runway and airfield lighting; first Auxiliary Security Force instituted in over 15 years with 27 new augmentees; and the Navy’s first Community Recreation program with a consolidated golf, outdoor recreation, and tickets and tours center that is the new model for other installations to emulate.

The main base of NAS Meridian occupies more than 8,000 acres of land, with an additional 4,000 acres at Joe Williams Field and the target facility SEARAY. The size of NAS Meridian may be compared to that of other major naval air stations such as NAS Pensacola, Florida, which has about 5,000 acres.

The theme “Navy Meridian, Pride of the South” reflects the superb teamwork that exists between the base and the Meridian community.