The McDonnell Douglas F/A-18 Hornet is a high-performance tactical airplane that can be operated from either aircraft carriers or land bases. It is a single-seat, twin-engine aircraft that can undertake fighter, attack and reconnaissance missions. Two-seat Hornets are produced for pilot training and support roles.

The excellent reliability and quality workmanship of the Hornet means less maintenance, repairs and servicing, fewer parts to keep on hand, reduced costs and an aircraft ready to fly when duty calls. An on-board auxiliary power unit allows for self-starting and systems testing.

The Hornet can obtain a top speed of Mach 1.8 plus and can carry more than 17,000 pounds of external load. It has all-weather, air-to-air radar and a control system for accurate delivery of conventional and guided weapons.

The F/A-18’s advanced systems and multirole performance make it superior to the F-4 Phantom II and A-7 Corsair, which it replaces in U.S. Navy and Marine Corps arsenals.

The Boeing multimission F/A-18E/F Super Hornet strike fighter is an upgrade of the F/A-18C/D. The Super Hornet provides the battle group commander with a platform that has range, endurance and ordnance carriage capabilities comparable to the A-6, which have been retired. The F/A-18E/F aircraft are 4.2 feet longer than earlier Hornets, have a 25 percent larger wing area and carry 33 percent more fuel to effectively increase mission range by 41 percent and endurance by 50 percent. The Super Hornet also incorporates two additional weapon stations. This allows for increased payload flexibility by mixing and matching air-to-air and air-to-ground ordnance. The aircraft can also carry the complete complement of “smart” weapons, including the newest joint weapons, such as JDAM and JSOW.

The Super Hornet can carry approximately 17,750 pounds (8,032 kg) of external load on 11 stations. It has all-weather, air-to-air radar and a control system for accurate delivery of conventional or guided weapons. There are two wing tip stations, four inboard wing stations for fuel tanks or air-to-ground weapons, two nacelle fuselage stations for Sparrows or sensor pods, and one centerline station for fuel or air-to-ground weapons. An internal 20 mm M61A1 Vulcan cannon is mounted in the nose.

Although 41 percent interdiction mission range increase may be the most notable F/A-18E/F improvement, the ability to recover aboard with optimal reserve fuel and a load of precision strike weapons is of equal importance to the battle group commander. The growth potential of the F/A-18E/F is more important to allow flexible employment strategies in future years. If an electronically scanned array antenna or another installation-sensitive sensor or weapon system becomes available, the F/A-18E/F has the space, power and cooling to accommodate it. Although the more recent F/A-18C/D aircraft have incorporated a modicum of low observable technology, the F/A-18E/F was designed from the outset to optimize this and other survivability enhancements. The
all-F/A-18C/D/E/F air wing brings an increase in capability to the carrier battle group while ensuring the potential to take advantage of technological advances for years to come.

Rollout of the first Super Hornet occurred in September 1995, and it flew for the first time in November 1995, ahead of schedule and nearly 1,000 pounds under specified weight. In January 1997, the Super Hornet successfully conducted its initial sea trials aboard USS John C. Stennis (CVN 74). All of the Tomcat squadrons at NAS Oceana have transitioned to the Super Hornet. 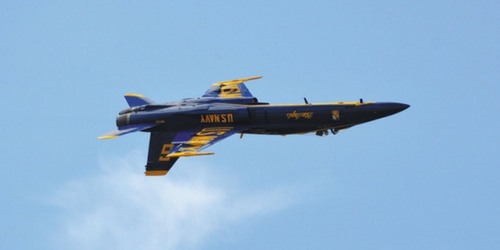 The aircraft carrier continues to be one of our nation’s most visible symbols of military might. Each of the carrier air wings at NAS Oceana supports Nimitz-class, nuclear-powered aircraft carriers, which are the largest warships in the world. Each flight deck is 4.5 acres of sovereign U.S. territory.

Each aircraft carrier is the size of a small city. The ship has a crew of nearly 3,000 men and women, which grows to nearly 5,000 when deployed with a carrier air wing. When aircraft operate from their flight deck, the aircraft carrier’s crew and air wing personnel function as a single team, providing our nation with a potent, flexible and mobile force.